It’s officially August and that means only one thing for UK-based horror fans… FrightFest! 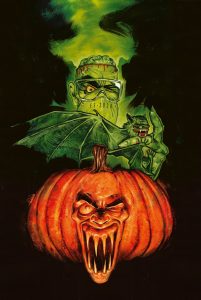 As event after event is cancelled, not only in the UK but worldwide, the FrightFest Gods have smiled down upon us and are holding their first ever virtual film marathon.

I know we’ll miss the camaraderie of attending FrightFest in person. We’ll miss picking our favourite cinema seat, catching up with our fellow horror nerds, and buzzing around Leicester Square nodding at everyone wearing a red lanyard. There is so much to miss.

There’s no rushing to McDonald’s and back in the forty-minute breaks between films; you can order Uber Eats right to your door. You can still connect with fellow FrightFest goers via social media. The excitement will still be there. The FrightFest community spirit will still be alive.

And, I don’t know about you, but I’m desperate to savour some new horror delights. I’ve looked through the schedule for FrightFest 2020 and here are five films I can’t wait to watch.

When a hotel hallway is ravaged by a viral airborne virus, will two women fighting their own personal battles manage to escape the hotel and its deadly plague?

This one may be a little on the nose for some, but I reckon most of you have already indulged in pandemic horror films, and no doubt we’ll be inundated with many more once restrictions lift – I predict pandemic horror to become the new zombie horror (you heard it here first).

But, judging from the acting, direction, and effects in the trailer, I reckon this one is worth our time.

Blind former actress, Faye lives alone in her Hollywood Hills mansion, unaware of an infatuated stranger living in her basement waiting to make his move.

Netflix did an excellent job with Hush, which was a home invasion where the lead female was deaf, and I think this will be in a similar league. However, this also has elements of Happy Death Day with the use of a creepy “pretty boy” mask.

This will get under the skin of those of us confined to our houses during the pandemic. I guarantee once the credits roll, you’ll be grabbing your nearest and dearest and investigating every corner of your home. Let’s hope there’s no one lying in wait for you.

Hail To The Deadites

An entertaining and informative documentary about The Evil Dead and its huge, continuing cultural impact.

From a film that spawned two sequels, a remake, a TV show, comics, and even a Las Vegas show, The Evil Dead has become a phenomenon. Personally, I’m not the biggest fan, but I respect a fear franchise that has not only lasted this long, but constantly mutates, bringing something new and fresh to its legions (and I mean legions!) of fans across the world.

Live vicariously through this documentary as the fans attend panels, buy merchandise, and hold Q&As – everything we’ll be doing next year when FrightFest is back in the flesh.

My advice? Buckle up, it’s gonna be a long, dark journey…

Splashy shocks and dismemberment await a group of teens who hit their local waterpark to celebrate graduation.

I love a good slasher. And we all love films that are so bad, they’re good. And who doesn’t love a waterpark? This ticks all the boxes for me.

Don’t expect character development, a real plot, or good acting. Instead grab some popcorn and your armbands and hunker down for a horror that looks so terrible, it may just end up being your favourite of the weekend.

For the full FrightFest schedule, visit frightfest.co.uk/. Tickets are on sale now.