In a dystopian world gone so wrong, State Of Decay 2 has got it so right in finding the humanity in the undead world. So is State Of Decay 2, more brains… or brain dead?

With the first game being heaps of fun, I couldn’t resist trying the latest instalment of the post-apocalyptic zombie survival horror RPG. I’m a big fan of the first one (along with many other horror-based games!), and when I heard in 2016 that Undead Labs were working on a follow up, I was beyond excited.

For those of you who have never played the first State Of Decay, you play as any one of several characters who you can change any time you like. When one dies, or if they’re with you or out scavenging alone, they of course become a zombie.

But that doesn’t mean it’s game over. Far from it. Smash that skull open and get those supplies back, then return to looting the buildings, carrying out your mission or simply exploring the vast world in front of you. There are cars to steal too, and with an achievement for running over a load of zombies, it offers another reason to drive on the highway to hell. 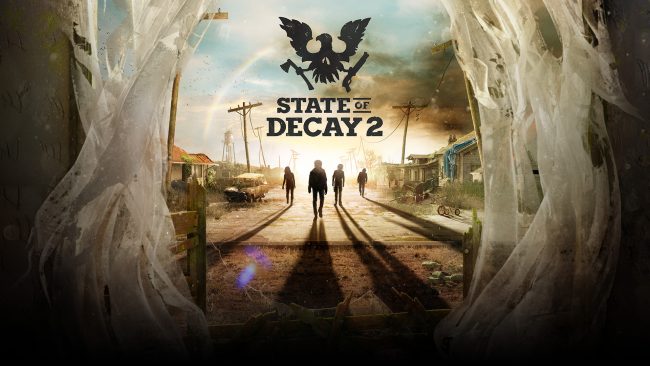 State Of Decay 2 is a lot like the first game, but with some new things thrown in as well (including some bugs that they need to address for future patches). I played most of it offline so I could get some experience before jumping into the multiplayer, which I heard was laggy and full of issues — we’ll get to that later.

You still have player stats like in the first game; you have cardio, wits, fighting, shooting, utilities, medicine and more. Each character has his or her strengths and weaknesses. For instance, a soldier would have good cardio and shooting skills but lower medicine and fighting. Every character you play as, and every survivor out there is useful, so rescue them, trade with them and reap the rewards. But beware crossing an enclave of survivors, or you may find yourself dead.

You can also pick from one of three locations to set up home at the start of the game. You do have a base to build and secure and lots of things to develop within it — such as a garden for morale and a shooting range, or maybe you would prefer a gym. Don’t forget to build a sniper tower for essential added defence from that pesky braindead hoard either.

Almost all of your time is spent out exploring the world, searching a house for useful items, storing them in your backpack and then turning the place into an outpost. This does get a little repetitive, and it does feel like a grind to get resources to keep your party alive. But overall it’s not that bad. 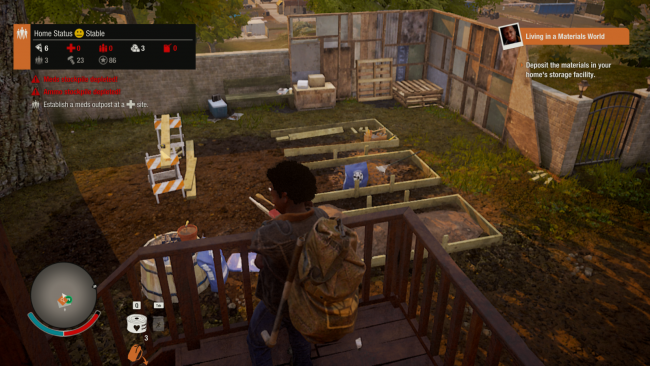 Your inventory space is limited so when scavenging take what you need and run it back to base, then run out again. You’re also not limited to the house you start at — far from it. If you’re out exploring the wilderness and discover what looks like a more suitable place to call home, go pack your stuff, and off you go. Combat has a similar feel as in the first game which was clunky and at times awkward, but it’s not as bad this time around.

Back to those stats for a second…

If you’re sprinting around like an Olympic athlete (or at least wishing you were one), you’ll need to work on your cardio. Otherwise you’ll find that bar drops faster than a Sumo wrestler down a flight of stairs. But you could end up with a character who has asthma — that will make you change your entire approach to certain situations.

Work on your shooting too, and you’ll be more proficient with firearms. There are so many things to work on with every character, but you’ll also find some have high stats already for some things and that help goes a long way. But wait… after all that running, fighting and looting, you run into a problem: fatigue.

If you’re out there for a day or two running around like Mo Farah, that cardio/stamina bar will get smaller. You’d better get some rest because every time you use a crowbar, knife, axe or bat, it eats up your strength, and you need that to run as well as attack. If you find or take snacks with you, they will replenish your bar and ensure you can stay out past your bedtime. 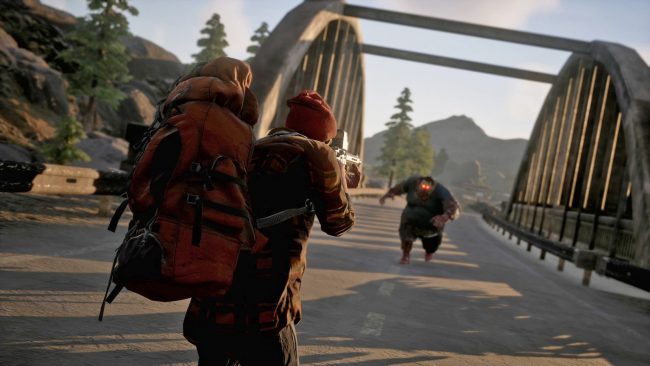 There is also a day/night cycle to deal with. When night comes, this game is dark… and I mean really dark. With only a small cone of light provided by your torch, it adds a sense of claustrophobia too. There have only been a few other games I’ve played that make sure you suffer at night — Emily Wants To Play is one that springs to mind.

Turning the gamma/brightness up does help a little, but that also spoils the fun and sheer terror you’ll experience when travelling at night. As for the zombies, there are six different variants, and each of them can end your life before you know what’s happened. Juggernauts are possibly the worst — they are the toughest and will rip you and your party apart.

Now for the multiplayer. It’s simple to start an online game of State Of Decay 2 — you can join your friends or make a private match. But beware… as I mentioned earlier, there are lots of bugs — and I do mean lots. There is rubberbanding going on all over the place. Cars can take a heap of damage from seemingly nowhere, and be on fire a moment later. They’re fond of flying too, flipping over several times from what was seemingly a simple crash.

There’s a chance you’ll fall into, or through the scenery too. Undead Labs are prepared for this though, and you have an option to backtrack your character a little way to unstick them should it happen. And believe me, you’ll be using this.

All in all, State Of Decay 2 is a lot of fun to play. Yes, some might see it as repetitive, the three map areas feel a bit generic at times, there are connection issues for multiplayer, sometimes zombies spawn in the air, cars kill you for a slight scratch, and combat can tricky. But you know what? all these issues are easily overlooked because this game is well… really fun.

State Of Decay 2 is FREE with the Xbox Game Pass or £25 for the basic copy. I really enjoyed playing this game and will continue to play it. Give it a chance and see what you think.

8/10. These brains are worth feasting on.