Is There A Hidden Meaning To Piranha?

Joe Dante’s horror/monster movie, Piranha (1978) doesn’t seem an obvious place find a state of the nation text / subtext, but in its jaunty, quick-witted attempt to cash in on the Jaws phenomenon, it does just that. 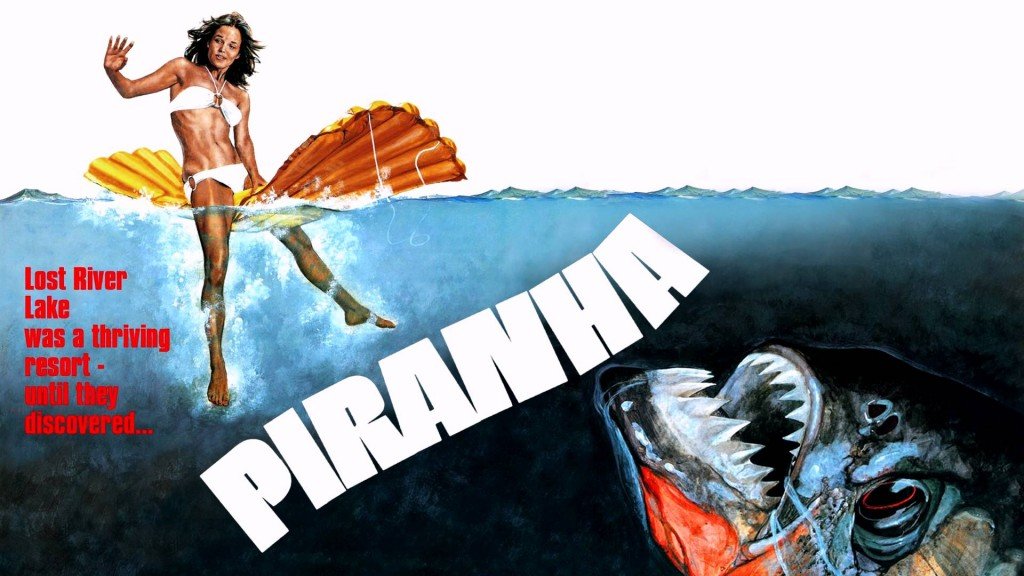 Dante owns up to the fact that this film is sniffing around Spielberg’s territory in the opening credits, having the sassy skip tracer, (a missing person’s investigator in English), Maggie McKeown, playing a Jaws-based video game.

In his book Easy Riders, Raging Bulls, Peter Biskind explains how Hollywood never truly felt comfortable making downbeat European art house films like One Flew Over the Cuckoo’s Nest or hip counter-culture films like Easy Rider. In the book’s final chapter, Biskind explains how the studios fell in love with the unstoppable money machine that was a rubber shark.  Spielberg’s film, through a well crafted screenplay and superior filmmaking, took a creature feature into the big league and changed American cinema forever.  For better or worse.

And yet, however much it tried to emulate its bigger, more powerful and rather straight-laced big brother, Piranha never quite breaks out of its B-movie mould. However fanciful it was to have a great white shark in the cold waters off the east coast of America, perhaps genetically refined, intelligent Piranha fish from the Amazon was just a bit too wild to be truly credible.

B-movies are where American stars and directors used to cut their teeth (so to speak).  Jack Nicholson started in Roger Corman films, for example. And after Piranha, Joe Dante would go on to have commercial success with Gremlins.  James Cameron was actually fired from Piranha 2, and we all know what happened to him.

What makes this low budget film fun to watch is the sparky script by John Sayles, with its tongue half in its cheek and its swipe at the US military industrial complex.  With well-rounded women characters being not just teenage lust objects or lambs to the slaughter, Piranha is unusual for the era and genre.  It also mirrors the emerging ecology movement concerns with a straight forward ‘don’t mess with nature’ message.

If you like to find subtexts in horror and believe that Night of Living Dead is a commentary on race relations, or Day of the Dead is a Marxist tract on consumers becoming zombies, than perhaps you could believe that the brutality of The Texas Chainsaw Massacre could have been a response or a reflection of the appalling images piped into homes across the USA during the Vietnam war.

It’s not too big a leap of faith to say that Piranha’s subtext could be how the military, when there are no wars to fight, continue to be a destructive, demented shoal of death hell bent on destruction, just waiting for some twit to let them out of their tank…

…or it just could be a fun B-movie about fish with sharp teeth.