My favourite movie genre is, of course, horror. My second favourite is one I like to call “god-awful-horror-movies-that-starred-super-famous-actors-when-they-were-nobodies”. Catchy, I know. 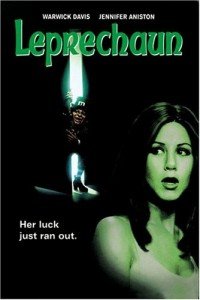 Of course, all actors have to start somewhere and I’d never bash someone for putting themselves out there… However, some of these trash horror films are so shocking (not in the fun way) that I’m pretty sure these big-name actors will be paying somebody to keep them off their IMDb pages right now.

If horror fans are known for taking a sick pleasure in watching all things gruesome then it’s no surprise that we find an even more twisted joy in watching big time celebrities, who have since abandoned our beloved genre, gallantly trying their best in movies that are so bad, even we can’t bare to look.

The movies, understandably, aren’t too well known (except, perhaps by us horror buffs), but these monstrosities are out there, lurking in the deep dark depths of Netflix – and what are horror fans if not amateur monster hunters? So I found them for you.

An old Gaelic myth turned into 2 hours of Warwick Davis terrorising people with his irish based puns. What could possibly be laughable about that?

The movie opens with the painful stereotype of a drunken old Irishman named O’Grady but it only gets worse from there. The film then reaches its peak as the Leprechaun pogo sticks a man to death. I’ll repeat that. He pogo sticks him. To death. And who’s that screaming and beating this formidable Leprechaun with a random bit of wood? It’s Jennifer Aniston!

Oh Jen, if only you’d resisted the siren’s call of a cheap slasher for just one more year – Leprechaun blessed the world with its existence in 1993, Friends premiered in 1994. Ohh, so close.

Bradley Cooper also found his big break in The Hangover just one short year after his horror attempt came out. In fairness, despite that cringe-inducing title that you can’t possibly read without doing the big bad voiceover-man voice in your head, it actually does have a half decent script.

Unfortunately for dear Mr Cooper, the film was produced in those awkward years where horror filmmakers had discovered that they could create CGI gore but hadn’t yet realised that they really really shouldn’t. (Final Destination 3D anyone?) And so we are left with digitally created eyes popping out of heads and bleeding victims whose blood is added post-production.

The result is not good. There’s actually a bonus celebrity in this one because Vinnie Jones stars as The Butcher – however the man was already long-famous by 2008 so I kind of get the feeling he just did it for giggles.

Now, 1974’s The Texas Chainsaw Massacre is a bona fide classic, and the 2003 version, in my opinion, is a rare example of a remake actually doing the story justice. HOWEVER, there are 3 lesser known attempts at rebooting the franchise that happened in the space in between the two.

Credit where credit is due, at least these failed attempts gave the 2003 filmmakers a pretty solid idea of what not to do. You know, like maybe don’t give the bad guy a weird mechanical leg with sound-effects straight out of Red Dwarf!?

This film is a real 2-for-1 bargain on the celebrity front. As an actress who made her name by representing realistic women in Bridget Jones, we get to instead see Renee Zellweger playing the classic scared blonde virgin “with a body to die for.”

Then we have Matthew McConaughey, an actor who has recently tackled themes as complex as wormholes, AIDS and drug abuse, instead playing the super duper complex character of “redneck with a pickup truck and a shotgun.” It’s not hypocritical, it just predates their Hollywood branding.

It’s the sort of film that ITV4 would air on a Sunday afternoon for your dad to fall asleep in front of. And in terms of fear factor, it makes Snakes on a Plane look like The Hills Have Eyes.

I added this movie to the list for superstar Jennifer Lopez’s role in it so you can imagine my sheer joy upon watching it to find Ice Cube cracking a “Yo Mamma” joke and Owen Wilson being crushed by ol’ Snakey. At least they all have each other to get through the cringiness with!

Doing a dodgy horror film is a right of passage for American actors – like a Hollywood version of playing a gangster in The Bill. Plus we get a healthy amount of so-bad-they’re-good film nights from them, so let’s not be too harsh on the poor actors. It can’t be helped that the movies they hitched themselves to turned out to be… well… a bit shit.

We can’t all be as lucky as Johnny Depp, who also followed the trend of launching your career with a horror movie. Only this time of course, it turned out to be one of the greatest ever.

So next time a horror film is released that seems like nothing more than 2 hours of your life you won’t get back, instead of trying to forget it ever happened, why not place your bets on which one is gonna end up being the big star that denies it ever happened?