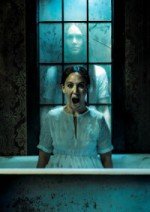 As part of the London International Mime Festival, Dutch production outfit Jakop Ahlbom Company are performing the UK premiere of Horror on the 25th and 26th January at the Sadler’s Wells Peacock theatre.

The story is set in a deserted mansion… a young woman returns to the place of her bleak childhood. No longer able to suppress memories of her cruel parents and strange sister, she is forced to confront the past and some terrible truths.

With its eight-strong cast, Jakop Ahlbom’s imaginative homage to the horror movie genre is ingenuously gruesome, genuinely scary and frequently very funny. Referencing Gothic spine-chillers as well as more recent frighteners like The Shining, Rosemary’s Baby and The Exorcist, Horror will have you shuddering at the edge of your seat. Swedish-born Jakop Ahlbom recently directed his first opera, staged at Deutsche Oper Berlin, and his dance film Off Ground, starring Louise Lecavalier, won the the prestigious Prix Italia TV Award. Lebensraum, his previous show for the Mime Festival in 2014 was a spoof of Buster Keaton films which garnered rave reviews and played to sell-out houses.

Don’t miss his latest cinema-inspired new drama, a journey into fear and fun, with all the mystery, gore and logic-defying illusions you could wish for.

You can book tickets here, and check out the trailer below: