With the London Horror Festival Playwriting Competition’s 2018 winner, Goodnight Mr. Spindrift is about to have its first full stage production at the Old Red Lion.

We checked in with playwright Nancy Netherwood to chat about horror, theatre and the two of them combined.

What is Goodnight Mr. Spindrift about?

The play is about a couple, Archie and Isaac, who have put themselves forward for 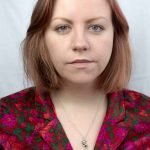 ‘certification,’ a government-mandated exam that assesses their suitability as a couple.

If they pass, they unlock a better standard of living; if they fail, they can never see each other again.

The strange, intense tests, conducted by examiners Iris and Valentine, push them to their limits and force them to confront some uncomfortable truths about their relationship; a relationship that may not survive the night.

What does Goodnight Mr. Spindrift mean to you? 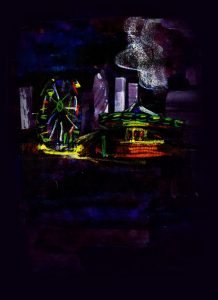 I wanted to write about things happening in the UK at the moment that scare me – the housing crisis, the rising costs of living in London, the promotion of conservative, “traditional” values in reaction to austerity, the worrying habit our government has of sneaking dangerous policies through when we’re not really looking, classism and trauma and how they can be internalised and turned on ourselves.

But I think it’s really about how intense and amazing and terrifying it is to be in love.

Being in love can make you think and feel a lot of things that make you doubt your sanity and I sort of wanted to explore that times a hundred – how much does your anxiety and insecurity about your relationship intensify when you’re being put under unbelievable pressure?

I’d say that’s the core of the play.

What do you want audiences to get out of Goodnight Mr. Spindrift?

I want to challenge people’s expectations of horror theatre – I want them to be invested and drawn into the eerie, frightening world of the play but I also want to get them angry on behalf of these characters and themselves about oppression and abuses of power.

This is a political relationship drama as much as it’s a horror play.

I also hope it reminds them that there is no “perfect” person for them, and other people don’t get to define your relationship. And that they come out wanting to tell the important people in their life that they love them.

Why is horror theatre important to you?

As a writer, horror is one of the most powerful, exciting ways to explore the issues I’m 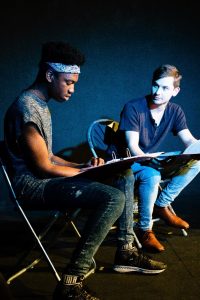 interested in – mental illness, trauma, gender, heredity – and it’s so frustrating to me that it’s often dismissed as trashy or unimportant.

It can be, sure, as any genre can (and there’s nothing wrong with that!) but some of the deepest character development, cleverest satire and most unforgettable images I’ve experienced have been in horror.

It allows us to understand our deepest fears and darkest traumas in a way that naturalism sometimes can’t, and the immediacy of theatre really adds to that.

As an audience member, I just love watching horror theatre.

It’s so much more intense and physical than literary or film horror, and there’s nothing like the bodily shiver of something terrifying happening in the same room as you. Especially in a blackout.

What’s the best piece of horror theatre you’ve ever seen?

So many, though a lot of my favourites aren’t technically horror.

Headlong’s adaptation of 1984 is one of my favourite shows full stop – it’s very eerie and oppressive but subdued for most of its run time, but the room 101 is pure horror.

Similarly, Grimly Handsome, which played in the Royal Court’s temporary space The Site in 2017, walked a very weird genre line, but was undeniably weird and quite frightening.

Alistair McDowall’s X is an existential sci-fi nightmare that uses some classic horror tropes (think spurting neck wounds and a very creepy child crawling out of a cupboard) and the very stylish musical adaptation of American Psycho stays gruesomely true to the novel.

I saw Berberian Sound Studio at the Donmar Warehouse recently which absolutely blew me away – live foley and cleverly deployed stage blood are the keys to my heart.

Definitely catch that one if you get the chance!