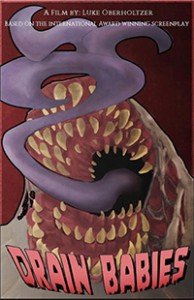 As most of you probably know by now, here at the LHS we tend to focus on covering projects that are born in this here green and pleasant land.  But then every now and again, something darkens our desks from across the pond that we just can’t ignore.  Drain Babies falls into this category.

Why?  Well — and bear with me here — it proclaims to be the “King of Giant Sperm movies”.  I’m sure you’ll agree that this increasingly popular sub-genre is currently busting at the seams with quality films, so it’s fantastic that we now have a definitive “best in show” that the cinematic history books can point to.  Especially before Hollywood start buying up the rights and rolling out the big-budget remakes.  Mark Wahlberg to play “Little Swimmer #1”?

But seriously. Ish.  Drain Babies is a gross-out comedy horror from the warped mind of Luke Oberholtzer, whose script is building a fair bit of buzz in his native US.  Here’s the concept in his own words:

Rick Little, an 18-year-old virgin, skirting the dreaded “friend zone”, works up the courage to ask Heather, the girl of his dreams, to prom… until he unwittingly creates a sewer dwelling sperm monster that terrorizes the community. Rick sets out with his two best friends in a race against time to uncover the truth and stop the monster before it destroys everything they’ve ever loved.

Drain Babies mixes The Blob, Scream and 80’s B horror with the humour and camaraderie found in American Pie and The 40 Year Old Virgin.

There’s even a proof of concept trailer you can watch.  Unsurprisingly, it’s a little NSFW.  You have been warned.

Whether its through warped perversion or the sheer power of intrigue, we’re actually keen to see where this goes.  Here’s hoping it turns out to be the first in a long line of Troma-style cult hits, rather than just a… erm… big pile of wank*.