Irving Undead – a one-man play starring award-winning actor James Swanton (the demonic spirit in Host) – will be revived this October. 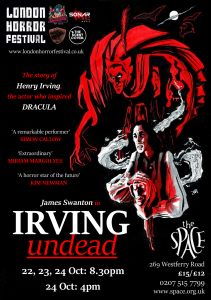 The play, which tells the true story of the Victorian actor Henry Irving, is getting four showings at The Space, from 22 to 24 October, as part of the London Horror Festival. The evening show on 24 October will also be available as a livestream.

Swanton’s previous one-man plays have gone on to the West End (Sikes & Nancy at Trafalgar Studios) and even been turned into feature films (Frankenstein’s Creature at FrightFest). But none of them have been as personally important to him as Irving Undead.

‘I’ve been intoxicated by Irving’s life and art for the last eight years or so,’ says Swanton. ‘My earliest acting influences were the likes of Christopher Lee and Vincent Price and Boris Karloff, so I’ve been thrilled to discover that the tradition of horror acting had an almighty precedent in Irving’s Lyceum Theatre.’

Swanton is no stranger to horror acting – so much so that Kim Newman has referred to him as a ‘horror star of the future’. But Swanton is clear about where the tradition began.

‘There’s no doubt in my mind that Irving was the most frightening actor who ever lived. Irving’s best-loved parts tended to be strikingly macabre: not only his signature role of murderous Mathias in The Bells, but the Flying Dutchman, Eugene Aram, Louis XI, Richard III, Macbeth… Did I mention Mephistopheles in Faust? Despite becoming so respectable a figure in later life, Irving was always subversive at heart.

‘Irving’s résumé amounts to a canon of semi-forgotten horror characters – and this makes him the perfect figure to resurrect at the London Horror Festival.’

One character with which Irving is forever associated refuses to die. Irving is still regarded as a key inspiration for Dracula, who made his first appearance in the 1897 novel by Bram Stoker, Irving’s long-time business manager. 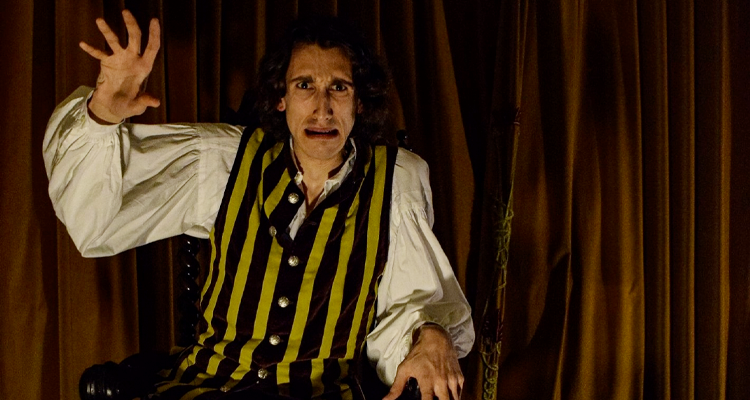 ‘It’s a very complicated subject, what inspires any artist,’ muses Swanton. ‘We know for sure that even if Stoker didn’t think Dracula was Irving, he certainly thought Irving should be Dracula! Stoker was bitterly disappointed that Irving never took up his suggestions to play the part.

Book Tickets for Irving Undead at The Space theatre.