Sam returned to The Pleasance in Islington for his fifth and final review of this year’s London Horror Festival: Cheekyita’s comedy horror Him Indoors. 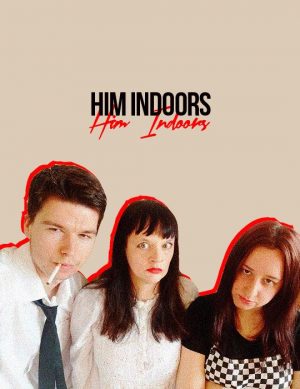 Sold as “The Mighty Boosh meets The Wicker Man” (with demonic eels), the story starts with a smooth, suave and very, very serious American journalist (performed by Tiberious Chris) following a rumour of a woman who swallowed a tiny human to, wait for it, Tittitutar Town.

What follows is a step-by-step investigation into the mysterious cause of the two-inch man, the effect he’s had on the woman he inhabits and the wider influence this has had on the residents of Tittitutar Town (performed by Sonya Doubleday and Nina Atesh).

A show like this makes a reviewer really question what it is they’re looking for in a production. 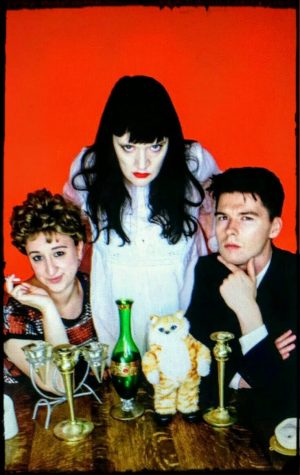 Did I enjoy it? Absolutely, yes.

A woman talks to a two-inch man without any explanation, clouds sing pop songs for no reason, two shop attendants dance to a robot cat because they could; absolutely nothing followed any set of rules that I’m used to and I laughed out loud constantly.

The little man in the woman’s stomach even sends her photos of his house being built in her intestines because “he has the Internet”.

It ends with an ‘exorcist party’!

There’s no doubt Doubleday was the star. She managed to be incredibly funny without giving off the slightest hint that she was anything other than incredibly serious and, if anything, I spent a lot of the show waiting for her to come back on again.

Verdict: All in all, Him Indoors is the kind of absurdist comedy that makes you forgive and forget slightly clumsy tech, and I’ll be watching out for anything new from Cheekyita with my finger hovering above the ‘book ticket’ button.