LHF Review: I Am Monsters!

Now, even though Hellraiser is not one of my favourite films, it definitely played a very important role on my horror journey – as did Nightbreed and of course, Clive Barker. 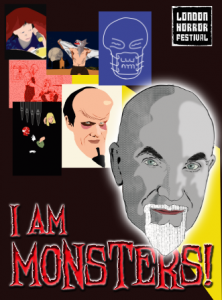 As a young person who’s only real experience of horror was through Stephen King, coming across the “future of horror” in Barker was a big deal. Therefore, for someone whose love for horror has grown so much, having the opportunity to watch Nicholas Vince’s one man show I am Monsters! was, again, a very big deal!

Vince becomes a roller-coaster conductor and we, the audience, buckled up for one hell of a ride. He took us back in time to his childhood and teenage years, and then to the making of both Hellraiser and Nightbreed.

These two films provided Vince with arguably his most celebrated roles of the ‘Chatterer’ Cenobyte in Hellraiser, and ‘Kinski’ in Nightbreed.

As we moved through I Am Monsters!, Vince explored his relationship with Clive Barker, how he came to know Neil Gaiman, and how he started to work for Marvel. We also got to hear him read from some of the most iconic horror / fiction books of all time – including a very raunchy passage from Dracula.

The show was part of the London Horror Festival and took place at the Pleasance Theatre in Islington – a charming and cosy place. The audience filled up the first rows of the theatre, and it all felt like a bunch of kids sitting around a campfire as the older, cool guy told us his war stories. Although there were a few problems with the sound, the show itself had no flaws.

Nicholas Vince was able to work the duality in keeping the audience in awe, but still managed to be down-to-earth and still kind of relatable – even though his repertoire is not that common to achieve. I am Monsters! is a must for the avid horror fan, and I hope he brings the show back to London soon!