With Hallowe’en in the air and the London Horror Festival in full swing, Sam stopped by its new venue to see Blackshaw Theatre’s Scare Slam: its fifth annual night of spooky stories.

The main stage of The Pleasance Theatre in Islington is an impressive fringe auditorium, purely because it’s always, always, always bigger than you expect. Whoever decided to stage Scare Slam in its 200-seater main space was ambitious but it worked.

Back for their fifth year, Blackshaw Theatre has brought us horror in its most traditional form: people telling scary stories around a campfire.

(Only without the campfire. Health and safety gone made or what?)

Faced with a simple microphone on a stand, I settled into my seat for a night of all things spooky, and once again wished I hadn’t sat so close to the black curtain on my right.

Our story selection from the night offered a smorgasbord of succulent scares.

First onstage was Ellie Pitkin, our host with the most, our MC, our guide and protector throughout tonight’s hauntings (provided her grandmother’s dolls didn’t curse you first — that was a genuine possibility). 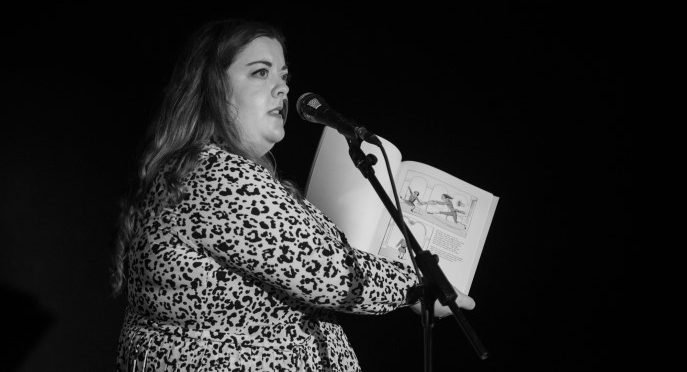 Some stories were more traditional, like Duncan Gates’ The Sad Kid in the Corner, with its chilling climax captured in a very candid performance from Gates, and Mike Levanzin’s The Summer of 66, offering a nostalgic flashback to 1960s Liverpool; a tale as tragic as it was terrifying.

Some experimented with form, like Nikky O’Hare’s Bed for Sale, Excellent Condition (performed by Natalie Winter) or Andrew James Brown’s The Bistro: the former being performed by the light from a phone alone; the latter presenting a tray of Parma ham (or was it?).

Some delved deep into Irish folklore, like Eleanor Verner’s paranormal parable, which added demon dogs to my already personal fear of normal dogs.

The two that stood out the most, however, were George Morris’ Her and Reece Connolly’s Twinkle Twinkle.

The former was a self-confessed “shitty ghost story” performed with such incredible dedication that it was anything but. I believed his story so much that I became phenomenally uncomfortable and I shall now forever wake between one and three o’clock in the morning and believe that something is watching me.

The latter presented an almost entirely humorous monologue as if it were deadly serious that built in its madness, twisting into a truly twisted conclusion that’s still twisting my brain as I write. I can’t even begin to place my finger on where Connolly’s story came from but I want to know and I want to know now.

All was wrapped up with Pitkin’s reading from the beloved Heinrich Hoffman’s children’s classic Struwwelpeter (Google it. I dare you) and we all returned home for a night of (not very) sound sleep.

Verdict: Successful for its simplicity, Scare Slam was an intimate night of scary stories at their finest. I’m ready to buy my ticket for next year.