The LHS is back at The Unrestricted View Horror Film Festival!

We are absolutely delighted to announce that The London Horror Society is back once again with our own night of terror at the upcoming Unrestricted View Horror Film Festival 2017. 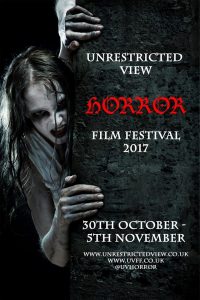 This will take place on Wednesday, 1st November at the Hen and Chickens Theatre in Highbury. The festival itself will run from the 30th October – 5th November.

The evening will be topped off by the screening of Cannibals & Carpet Fitters. This feature film is the follow up to the short of the same name that we screened last year at this very festival — and ended up winning the ‘best short film’ award!

Tickets are only £8 for the whole evening, but they WILL sell fast.  So make sure you grab for yourself by clicking here.

Take a look for yourself at what we have in store:

Their flirtatious conversation inspires her dark side but she gets more than she bargained for.

The Jitterman is all about how fear can control you, as a babysitter is terrorised by a malevolent spirit.

Terry starts working in an isolated toll booth on the Yorkshire moors, following his predecessor’s disappearance. His suspicions intensify throughout the night, finding out more disturbing details from the local odd-balls driving by.

…struggling to cope with extreme boredom, a desperate voiceless companion and a mystery he’d really rather not have to solve…

When Kurt takes a shortcut he enters a supernatural realm and is forced to sacrifice a little part of himself.

Jack loves a bargain. When he buys suspiciously cheap parts to build his dream shed, he and long-suffering wife Helen find they’ve got more than they bargained for: a killer shed with an appetite for blood.

A comedy horror about a man’s twisted love for his shed… that eats people.

A group of carpet fitters are sent on a job to an old Country house in the middle of nowhere.

However they soon discover it’s a trap set up by the savage, cannibalistic family, The Hannings. The carpet fitters are forced to fight for their lives or risk ending up being the evenings dinner. Unfortunately they are not quite your typical heroes!