We are absolutely delighted to announce that The London Horror Society has curated its own night of terror for the upcoming Unrestricted View Horror Festival. 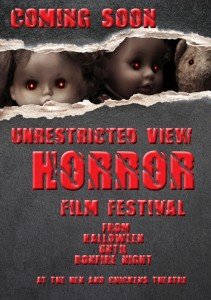 This will take place on Wednesday, 2nd November at the Hen and Chickens Theatre in Highbury. The festival itself will run from the 31st October – 6th November.

The evening will be topped off by the screening of one of the feature highlights of this year’s Frightfest festival – the utterly incredible and extremely hard-hitting Cruel Summer.

Tickets are only £8, but they WILL sell fast.  So make sure you grab for yourself by clicking here.

Take a look for yourself at what we have in store:

He needs to know who killed her but an unseen hand may be guiding his dark fate.

Hand It Back By Robbie Gibbon

15-year old Ryan is desperate to be part of the local gang even if this means stealing. After his first bag snatch, he is shocked to discover he has unwittingly stolen a 300-year old magical severed hand.

Now unable to get rid of the hand, Ryan is forced to learn some important life lessons. Only when he begins to appreciate the hand and finds the strength to resist peer pressure is he able to free himself from its power.

Is Peter a risk to himself or is something more sinister about to be unleashed?

Dean & Colin are two carpet fitters who are called out to a job in the middle of nowhere by a sweet elderly lady Mrs Hanning.

The Stomach By Dan Dixon/Ben Steiner

Frank’s had enough. A spirit medium whose unique and grotesque method of channeling the dead is putting his own life at risk, he wants out. But others, in this world and the next, have plans of their own.

Silently Within Your Shadow By Scott Lyus

As their relationship grows, Lucette’s obsession for ventriloquism and her dummy Hugo starts to strain her relationship with Jace.

To Lucette, Hugo is more than just a dummy — he’s her best friend and represents her ambition as an artist. To her, he’s very much real. But to Jace, Hugo is just a puppet, or is he?

Accepting an invitation to a barbecue turns a woman’s life upside down… forever.

In the tradition of Bennett, Roald Dahl and Saki it explores the theme of satan in the suburbs.

Bill is a middle-aged lecturer and antiquarian book specialist who arrives at Montague Castle to catalogue the library’s more interesting volumes.

But Bill has other things on his mind for his time away from his young family. He intends to spend a night of passion with Jess, one of his undergraduates. What better way to impress a girl than to have a night alone with the run of a castle? Only they aren’t quite alone…

That’s all about to change when enraged teens Nicholas, Calvin and Julia find him, each with their own agenda for wanting to see Danny suffer.