The LHS at The Unrestricted View Horror Film Festival!

We are absolutely delighted to announce that The London Horror Society is back once again with our own night of terror at the upcoming Unrestricted View Horror Film Festival 2018. 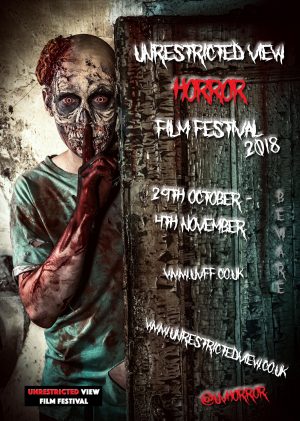 This will take place on Wednesday, 31st October (yeah that’s right — the Halloween slot!) at the Hen and Chickens Theatre in Highbury. The festival itself will run from the 29th October – 4th November.

The evening will be topped off by the screening of the incredible Book Of Monsters. This film by the supremely talented Stewart Sparke wowed audiences at the recent Frightfest film festival, and its epic combination of gore, scares and humour is sure to bring the house down!

Tickets are only £8.75 for the whole evening, but they WILL sell fast.  So make sure you grab for yourself by clicking here.

But for all London Horror Society members, you can grab 25% off by simply entering the code UVHORROR.

Take a look at what we have in store:

Four friends, well aware of the irony and cliche involved, visit the abandoned Carpenter Hill Hospital for fun, for laughs and for scares.

But none of them can know the true darkness that waits for them, a force they find themselves inexplicably drawn toward…

Three enslaved girls are immersed in beautiful surroundings, hidden beneath this beauty lies a dystopian society pushing the girls to perfection.

An off duty police officer attends an unusual call, in this twisted short with a moral sting in the tail.

It aims to use horror tropes to subvert the audience’s expectations, and deliver a twist that’s designed to leave the viewer considering a debate as old as the justice system itself… how far should you go in the name of ‘justice’?

From award winning filmmaker Naeem Mahmood comes  a mind-bending nightmare about the dark side of the music industry.

The cast is drawn from all areas of the pop culture landscape, including a soundtrack that has been produced by Nick Rhodes of Duran Duran.

When single mum Karen and her baby visit their elderly neighbour Doris, Karen soon realises things are not at all what they seem. Doris has plans for Karen and the baby and enlists a group of elderly cohorts to see her plan through.

A short original film full of deranged and quirky characters. Expect the unexpected in this weird and disturbing story of neighbourly love, friendship and murder, but mainly murder.

An unhappily married couple ignore the grotesque, dripping stain that is growing on their ceiling.

As their marriage gets worse, so does the drip until they can no longer ignore it…

A grieving man, Emeka, is trapped in a time loop by the demon known as The Trespasser.

To survive, he must confront this demon and his past relationship with his Grandmother. With each death he seeps into his own mind, forcing out harsh memories from his past.

In a poisoned sea, on a forsaken rock, a holy sect seek to bring about a new era, but Morgan discovers their intentions are not wholly pure, and there’s more to the Island than rocks and mud…

An atmospheric animated Eco Horror confronting human insignificance at the end of the world.

A district nurse, played by Gemma Whelan (Game of Thrones, The Crown) is assigned a new patient living alone in a dilapidated bungalow.

The nurse soon discovers that her dying patient, and the home she inhabits, are hiding a dark secret.

Sophie’s 18th birthday party becomes a bloodbath when six terrifying monsters descend upon her house, intent on devouring the party guests and killing anyone who tries to leave.

As her school friends are torn apart and eaten, Sophie must rally a band of misfits and take up arms to send their party crashers back to hell. To survive the night, Sophie will face her destiny; monsters are real – and she’s the only one who can stop them.