It’s BACK! The UK’s original and largest festival of horror in the performing arts returns to London in its new home at the Old Red Lion Theatre for three jam-packed weeks this October. Scaring the living daylights out of audiences since its inception in 2011, the London Horror Festival is a celebration of the ghoulish, the thrilling and the downright macabre through the medium of live performance. 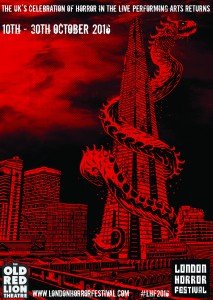 The London Horror Festival continues to support new writing and provide a platform for emerging talent in the horror theatre scene, with ‘Badass Women’ – a short horror play writing competition designed to create more empowering female roles. Dozens of entries have been received from across the UK and the top 3 shortlisted plays will be performed on the opening night, with an exclusive prize for the winning entry and special guest judges!

For something a bit different after dark, stay up late for two exclusive midnight performances of award-winning ‘Ex-Theologist turned Illusionist’ Philipp Oberlohr’s ‘séance’ – a critically-acclaimed interactive experience inspired by the tradition of Victorian Séances and the Spiritualist movement.

Littered with award-winning performers, original work and heaps of emerging talent, the London Horror Festival 2016 is sure to impress horror and theatre fans alike!

To grab yourself tickets to any of the shows, head to the Old Red Lion Website.

In the meantime, here’s a handful of the shows that we’re really looking forward to:

Our 5 Top Picks For The London Horror Festival 2016

Fred Strangebone’s mind becomes a sideshow tent of unsettling curiosities. Peel back the flapping canvas door and behold the freaks within.

A one man variety show of character comedy, clowning and spine chilling verse.

After a string of grisly murders, Detectives McKeith and Jones have two prime suspects… and they happen to be 10-year-olds… As featured on BBC3 and BBC Radio 4, horror-comedy duo The Twins Macabre present their darkest, most twisted show yet!

Greywing House sits precariously on the coast keeping watch over a cruel and tumultuous ocean. Miss Amelia has prepared your room, and awaits your arrival to introduce guests both past and present.

Award-winning performer Molly Beth Morossa intertwines storytelling, poetry, cabaret and original music by Daniel Cross (of Little Death Machine). This examination of isolation and loss through a classically gothic lens is sure to carry you out into deep, dark waters.

“Do I look like someone who cares about what God thinks”