While Hammer Horror had a hit with The Curse of Frankenstein, it was still trying to find its feet when it came to their horror style when The Abominable Snowman debuted. Their previous success with titles like The Quatermass Xperiemnt and X The Unknown came from Sci-fi films with horror elements, rather than straight-up horror.

Hammer decided that using the talents of director and writer team, Nigel Kneale and Val Guest, would be a great way to get success. The film about the famous Yeti was greenlit and released in the US as The Abominable Snowman of the Himalayas. 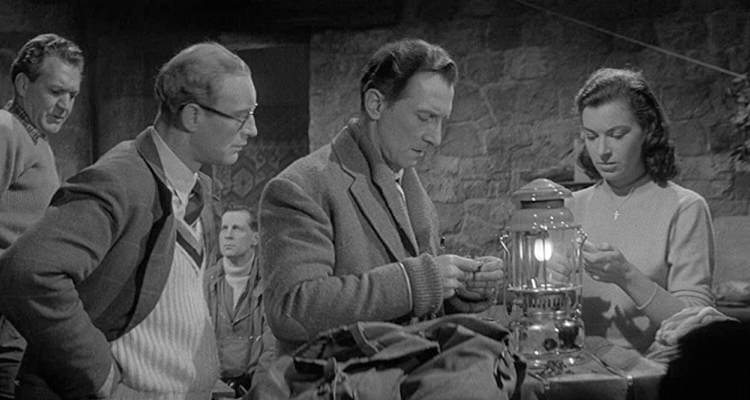 1957’s The Abominable Snowman is inspired by a spate of conjecture in the early 50s of sightings of a manlike primate called a Yeti. These claims of sightings came from many expeditions to the Himalayas, including Sir Edmund Hillary’s.

John Rollason (Peter Cushing) and Peter Fox (Richard Wattis), both botanists, are guests of the kind-hearted but enigmatic Lhama (Arnold Marle) in a Tibetan monastery, Rong-ruk. Lhama has extra-sensory abilities and often nags the scientists about their Western ways, to the point that he interferes in John’s relationship with his wife Helen (Maureen Connell).

Tom Friend (Forrest Tucker), an American adventurer, arrives to discuss the possibility of going on a small, well-financed mountain climb to an area where they could see an Abominable Snowman and bring it back to civilisation. Helen objects and is unhappy with this unexpected change in John’s research. Rollason is not aware of Friend’s desire to sell the Abominable Snowman to a carnival show, something he would object to as he is a scientist who wants to study and learn from the Abominable Snowman. Rollason also hypothesises that it is an intelligent creature with quasi-hypnotic powers, hiding away until the man finally devastates itself. 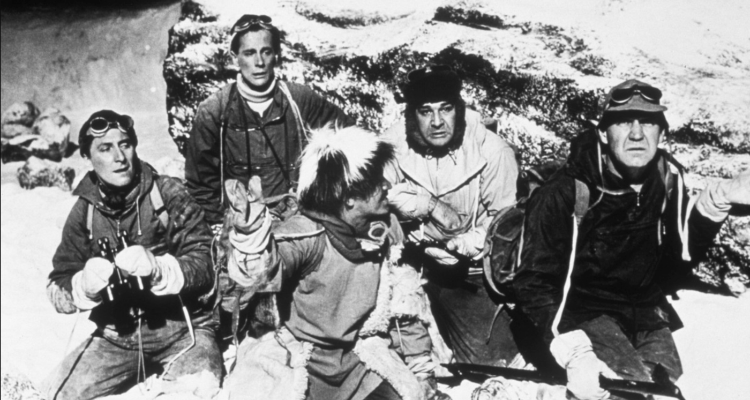 In the snowy mountains, the expedition is faced with a set of calamities and the party are haunted by their own concerns and anxieties. Apart from Rollason, the team is neutral when it comes to the creature and their primary concern is the sellability of the Abominable Snowman to the audience back home. What the animal looks like is immaterial, the ambiguity of the beast is the marketing gold.

The film has a dependable performance from Cushing but a voluble performance from Tucker. Cushing’s most dramatic moment comes as he argues about the Yeti’s place on the planet. The portrayal of Friend’s as “the ugly American” could be a subconscious (or conscious) reaction to Kneale’s dislike for Brian Donlevy’s version of his adored Quatermass character. Friend has all the characteristics that Kneale hated in Donlevy’s Quatermass, contrasted with Dr Rollason. Maybe Kneale’s had always wanted Cushing as Quatermass, and this was the closest the Kneale could get to that being a reality.

The portrayal of Helen sometimes borders on sexism. “Smart” outsiders come to a previously unexplored area, attempting some financial gain and leaving the defenceless women behind, is a tale that is eternal and still painfully important. On the most basic level, The Abominable Snowman theorises that Man is evil, but that is a simplistic way to view the film.

The Abominable Snowman belongs in a group of black and white Hammer films that modern audiences seem to have forgotten, such as The Stranglers of Bombay and These are the Damned. You may have noticed the repetition of sets and exteriors in early coloured films due to the costs and time associated with the lighting for colour films, most apparent in Dracula: Prince of Darkness and Rasputin, The Mad Monk. Black and white films, without these extra costs and time, can afford to have more various location shots.

For the time and the studio involved, The Abominable Snowman does not have the enthusiasm many of its counterparts has. As far as I am aware, The Abominable Snowman is the only film that implies that the title character is intuitive. And who knows what this mythical creature is capable of unless hunters are ever successful in this most elusive hunts. The film is influenced by the Atomic Age concerns, a clear message about man’s arrogance being their downfall. Another strong theme of the film is what it means to be “civilised”, which makes sense as this is when cracks appear in British imperialism. 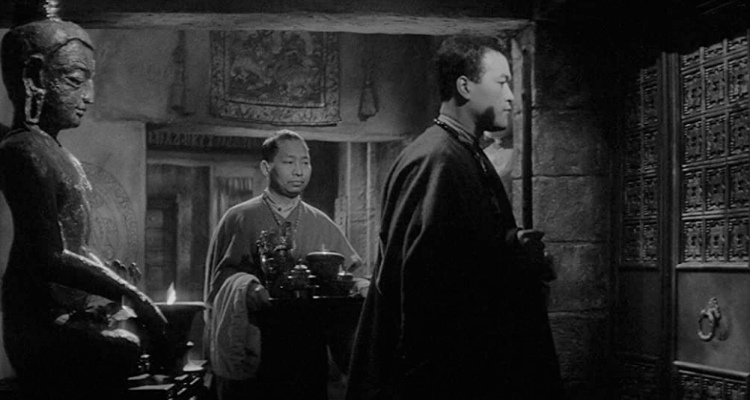 The monastery setting is visually dazzling and transports the viewer to a distinct realm. There is an excellent interlocking of the English set with the Pyrenees mountains’ shots, a decent substitute for the real Himalayas. It all comes to life with the beautiful black and white cinematography.

Overall, the film suffers from inadequate tension and only really worth watching for Cushing’s talent and the Eastern-themed music and chants that give the films its sense of curiosity and imminent catastrophe.