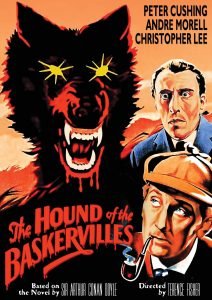 The titular Hound comes from the Hall of Baskervilles, owned by the malevolent Sir Hugo (David Oxley), who has locked away a young farm girl. When she escapes, Sir Hugo hunts her down and murders her on the moor with his sacrificial dagger. Sir Hugo’s end comes at the Hound’s fang, a vast savage beast. It is unusual for the curse’s origin to be shown in films like these, but enthusiasm makes this an attention-grabbing cold open. It can come across as a spoof to today’s eyes, but Sir Hugo has a real-life counterpart, Richard Cabell, a 17th century of Buckfastleigh, who was a horribly malevolent man. The Hound of the Baskervilles follows Holmes (Peter Cushing) and Doctor Watson (Andre Morell) as they are employed to protect Sir Henry Baskerville (Christopher Lee).

Sir Henry is the latest line to inherit the Dartmoor family estate, and the demonic hound curse, as he returns home from South Africa. The curse seems to prove itself real as a tarantula emerges out of the boot that Sir Henry is holding. Instructed to remain still, the spider proceeds up his arm and up to his neck. Just as it looks like Sir Henry is doomed, Holmes uses his cane to strike the spider off the arachnid is crushed.

Here was get some poetry from Holmes – “The powers of evil take many forms. Remember that, Sir Henry, when you are at Baskerville Hall. Do as the legend tells and avoid the moor when the forces of darkness are exalted.” Following the novel, Holmes exits stage left, and we spend the majority of the film with Sir Henry and Watson until his return at the climax of the film. This may seem confusing to anyone not familiar with the original source.

The Hound of the Baskervilles seemed like it was written for Hammer, although it was altered to suit the studio’s interest. You can see that from the opening scene, not straying too far from the original source, but enough to make it ‘Hammer’. Such as the cleavage of Cecile Stapleton (Maria Landi), gothic setting, rare events and possible perverts. 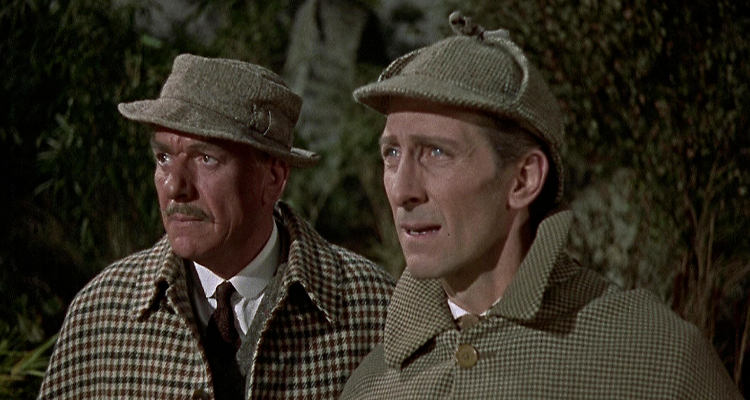 Cushing’s Holmes is strict and self-confident, where magnifying glass seems like an extension of his arm and not a prop. He is also happy to take on every case that comes his way, no matter how obscure. In Peter Cushing’s Monster Movies, he talks about his love for Conan Doyle and therefore, it makes sense that he gives one of the closest versions of the novels’ character. In many ways, Cushing’s Holmes resembles Benedict Cumberbatch’s performance – unintentionally impolite and lacks the understanding of normal social cues.

Holmes is not entirely indifferent, “My professional charges are upon a fixed scale,” he tells Sir Mortimer. “I do not vary them, except when I remit them all together.”
Holmes is as logical as always; he would not act malevolently, he is an impassive character, but he is not spiteful. Cushing’s Holmes can ignore the emotional state of those around him, instead going straight to the point, even if it is embarrassing. His version also has lovely fidgeting habits and is a tricky detective. 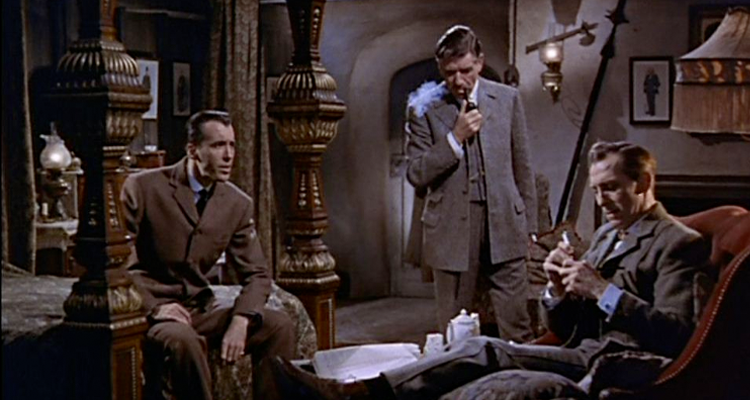 There is one moment where we see a prudish exchange between Holmes and Watson about the right-hand drawer while they argue back and forth about what should be in there. When it is not there, Holmes can not believe that he was wrong. Watson also tells Holmes off for the way that he treats Sir Henry, where Holmes tells him “stop talking nonsense”, which seems harsh. While I love Jeremy Brett’s drug-addled and irrational version of Holmes, Cushing excels in a character’s role with many forms.

Lee is excellent as edgy Sir Henry and does take some of the shine away from Cushing’s Holmes’ serene portrayal. It is great to see Lee break away from the villain typecasting, even if it’s an odd choice, especially for a Hammer film and something that would plague him later in his career. Lee plays Sir Henry with noble grace to begin with, but as the film progresses, we see him frozen with fear. He also plays the romantic lead against Landi’s good-looking intense Cecile, the daughter of a local man web-fingered Jack Stapleton (Ewen Solon). This makes him the victim of malevolent forces rather than the cause of it. Lee is excellent in a role that is not evil and more of an informal character. This gives Lee the rare opportunity to kiss the girl rather than bite her neck. Noteworthy Lee does play Holmes in Sherlock Holmes and the Deadly Necklace, Sherlock Holmes and The Leading Lady and Incident at Victoria Falls.

Morell’s Watson is one of the most accurate depictions of the character, with honesty and none of the sullen silliness of Nigel Bruce’s version and some of the character’s later adaptions. It is a skilled performance of an iconic supporting character. There are also some excellent strong support from Sam Kydd as the coach driver and John Le Mesurier as Baskerville Hall butler Barrymore. Terence Fisher, as the director, once again flexes his muscles with this film dealing with obliquely sexual undertones. Never specific, just strongly hinted at. 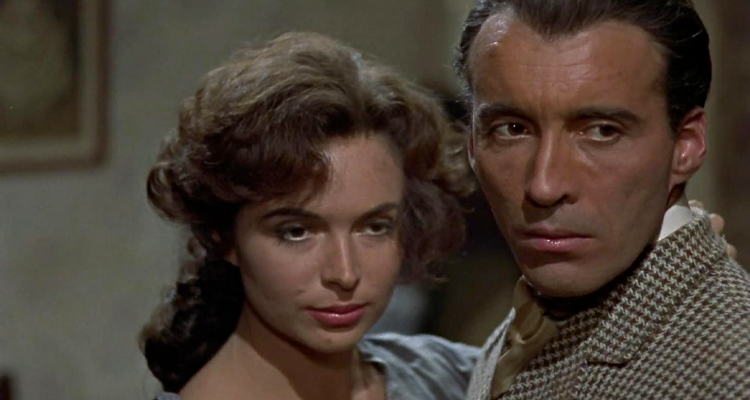 The Hound of the Baskervilles is superbly shot, but the Hound itself is one of the downsides to the film. When we finally get to see it at the end, its presence is not terrifying at all. Maybe it was because of this that the film was a letdown at the box office, scrapping any future Sherlock Holmes films for Hammer. Usually, a Sherlock Holmes film’s failure can be blamed on the actor playing the titular role, but this is something that Hammer did not get wrong. This is Hammer Horror’s gothic masterpiece and well worth a watch, especially if you are a fan of cool geniuses like Hugh Laurie’s House and Benedict Cumberbatch’s take on Sherlock.