Following the black-and-white success, The Quatermass Xperiment, and the luxurious Technicolour updates of Frankenstein and Dracula, it came as no surprise that the subsequent worldwide success came from The Mummy. Taking its style from Bray Studio and from here on, there was no doubt that Hammer becomes associated with horror. The Mummy follows Stephen Banning (Felix Aylmer) and his son (Peter Cushing) as they are being hunted by an ancient, merciless mummy of an Egyptian priest, Kharis (Christopher Lee). This happens after waking the mummy from his tomb in Karnak in 1896, despite the warning of a local man Mehemet Bey (George Pastell). 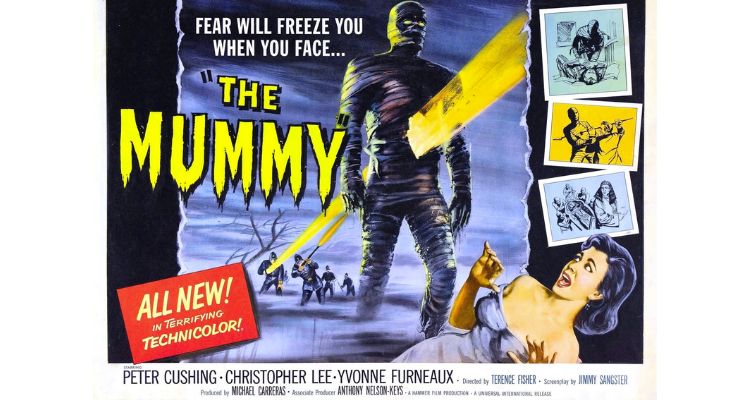 Bey returns to England and calls Kharis, whose body has been mislaid in a boggy swamp. As he raises, he vows to take revenge on those involved on those that defiled the tomb of his love, Princess Anaka (Yvonne Furneaux). The towering, lanky, and decaying mummy casts sharp shadows all over the English countryside. Dr Stephen Banning tries to warn people of the impending doom, but no one takes him seriously after his breakdown. Eventually, he is strangled to death in his padded cell by the mummy. This is not just a remake of the 1932 Boris Karloff’s The Mummy that wrier Jimmy Sangster brought to the screen, but elements of The Mummy’s Hand, which gives us more of the bandaged monster, The Mummy’s Tomb and The Mummy’s Curse. Hammer’s The Mummy has the same gothic ambience and brutal violence as the studio’s other works, but is probably the weaker of the three Universal monster updates, but so nearly succeeds. That does not mean that it is not a decent film.

Michael Carreras was the producer this time around, and his love of making a film an event makes this The Mummy great. The film feels more spectacular than the other two Universal upgrades, with a more extensive cast and Franz Reisenstein’s heroic score. Bearing in mind, this is all done in a few sheds in Windsor; it makes the film a considerable achievement. The set design by Bernard Robinson was impressive, and the cinematography by Jack Asher is beautiful. The discreet direction by Terence Fisher shows everyone in their best light. While The Mummy still has the feel of a Hammer film, it is distinct from The Curse of Frankenstein and Dracula. It has a feeling of originality, innovation, thrills, and erracticness in a reasonably obvious plot. We know who is not going to make it to the end of this film. 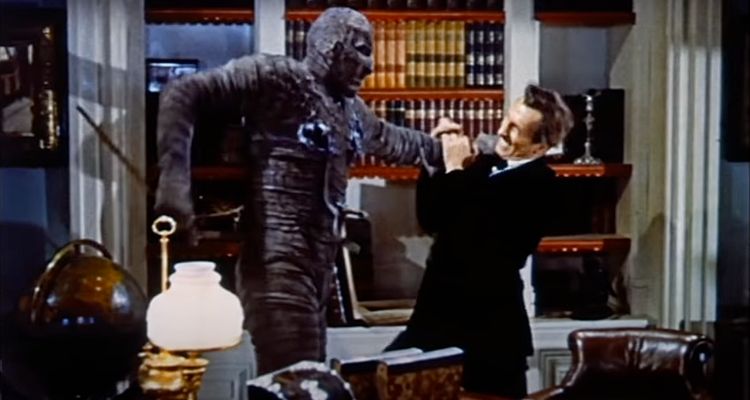 It is a bit slow to start as we establish the characters before the introduction of the mummy. We have a pretty extended flashback to ancient Egypt in the middle section of the film. The flashback was Kharis attempt to bring back his dead lover Ananka and the terrible punishment when he is caught in the act. The flashback was not really necessary, and better editing would have accelerated the pace, which would be needed as the mummy killed its first victim. The scene puts the brake on the action and makes it start all over again.

What it does give us is the mummy showing signs of hesitancy, admiration and fragility, told through Lee’s haunting eyes. As in many of the early Hammer films, The Mummy has some formidable confrontation. The cast is an essential part of the film. By having both Cushing and Lee, their scenes together feel like Van Helsing vs The Mummy, but that is not necessarily bad. Although Cushing does seem to give it everything, as he always does, and gets involved in the action, this isn’t one of his better performances. Especially compared to his turn as iconic and distinctive Van Helsing and Baron Frankenstein.

Out of the two actors, Lee comes out of this film better, playing the mummy seriously, without any hints of a limp or with unravelling bandages. Kharis in Lee’s hands is a nimble, brutal monster that breaks bars and breaks people. It is Lee’s training as a mime, along with brilliant, dazzling makeup, that cleverly leaves nothing but his eyes visible, where we can witness Kharis’ yearning and sense of disaster, giving the character its full dimensions and a tribute to his talents. The mummy is brutal and stealthy, but still gives off an aura of tragedy. We, the audience, can see the mummy as likeable and the only reason for him being a murderer is love. 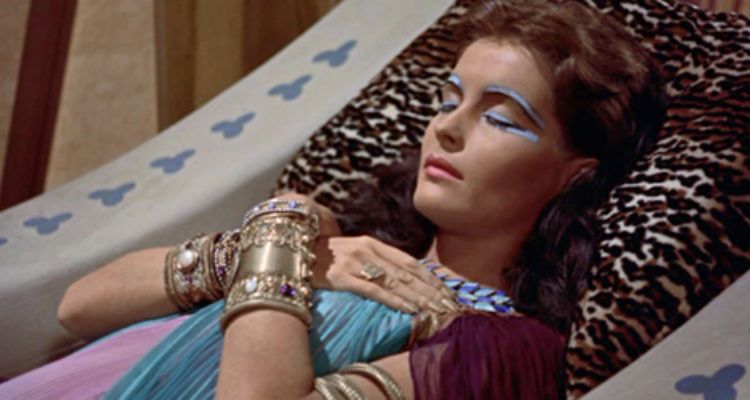 Lee’s awe-inspiring on-screen presence makes him a fearsome mummy, and one of the most brilliant scenes involves the mummy rising out of the swamp. While there is not a lot to The Mummy, it is efficient.  It’s not one of my favourite Hammer films, but it is one of my favourite mummy films. It is bleaker, with more action but gives us an exciting, formidable mummy, voiceless with expressive eyes, almost robotic in his desire to kill. People who have a love for both Universal and Hammer films will enjoy The Mummy. For modern audiences, the acting may come across as over-the-top and feels a little silly.

The Mummy is streaming now on Shudder.