Horror was not something that was often shown in my household growing up, as it was believed that it would damage me too much. 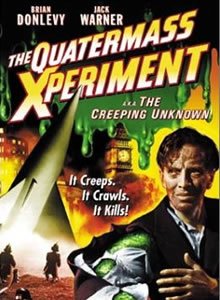 But, as I now am witch and horror writer, keeping me away from it clearly worked!

One of the few things I was allowed to watch was Hammer Horror. When you consider how risqué some of those films got, it seems a bit of contradiction, but there you are.

Because of this, I have such a soft spot for these films. So, I would like to highlight the good, bad and the downright weird that is Hammer Horror.

I will be doing just that in this new series of “Love Letters”.

To start off, let’s look at The Quatermass Xperiment.

Hammer Film Productions started in 1934, but it was not until 1955’s The Quatermass Xperiment that the production company became a fright machine, giving them the reputation that they have now.

Co-written and directed by Val Guest, the film knows what it wanted in regards to shadows, beast alteration, period distrust and animation science. All of these give the film a bureaucratic feel, while indulging in an eccentric premise concerning wickedness from another world. 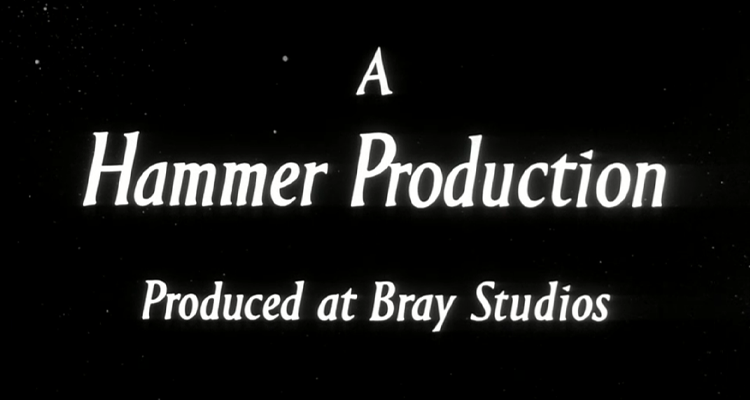 The film was deemed disgusting, frightening and too adult that no-one under the age of 16 was allowed admittance, earning it an X certification from the BBFC.

Hammer marketing helped make this a hit by incorporating that X Certificate into the title, wearing it as a badge of honour.

When released in the USA, it was named The Creeping Unknown.

The premise of The Quatermass Xperiment begins with a space mission failure. Professor Bernard Quatermass (Brian Donlevy), a once-great rocket scientist (but now a bit of a bully), rushes to the crash site of the first human-crewed rocket. 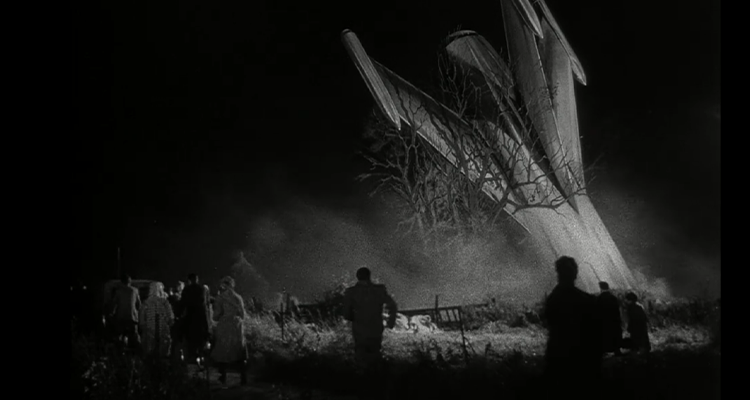 Astronaut Victor Carroon (Richard Wordsworth) emerges from the sealed cockpit, clearly in a compromised state. The other two members of the crew are nowhere to be found, leaving behind only their empty space suits.

Within the rocket, a strange jelly like substance is found.  Taken to the lab by Dr. Gordon Briscoe (David King-Wood), it is determined to be dead cell tissues from an animal or human. 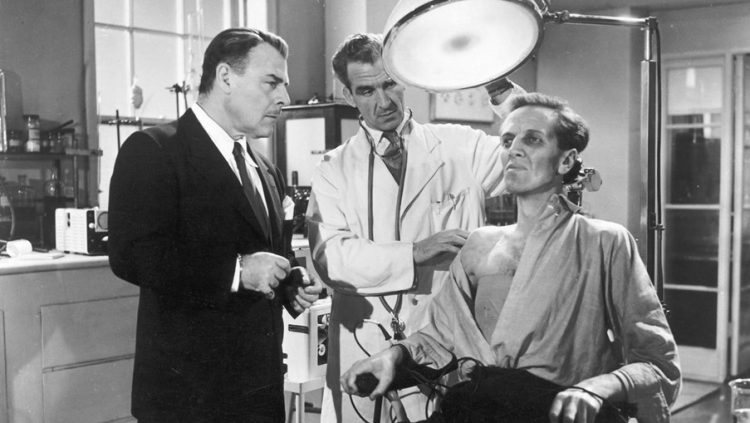 Carroon starts to display weird growths on his hands, which eventually will overwhelm him. When his condition starts to worsen, he is taken to a clinic and put into isolation.

His wife, Judith (Margia Dean), believes that brusque Quatermass is using her husband for his own purpose and plans to take him into her own care. She hires a private detective Christie (Harold Lang) to save Carroon from the hospital and bring him to her. 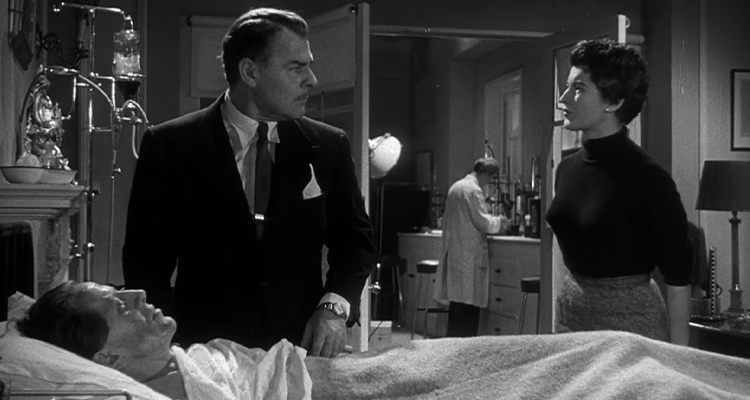 Unfortunately, this backfires. The disturbed astronaut kills Christie and makes his escape. He goes on to kill animals at a zoo and a chemist when he tries to get some medicine.

Carroon hates what he’s becoming, but he is compelled to feed and kill. Interestingly, this is an entirely silent role. Wordsworth shows his discomfort and struggle through only facial expression and body language.

When the film recording recovered from the rocket can finally be analysed, Quatermass and colleagues notice that something got inside the craft. The Professor’s theory is frightening; an unknown entity entered the spaceship in flight, ate the other two astronauts and possessed Carroon’s body. 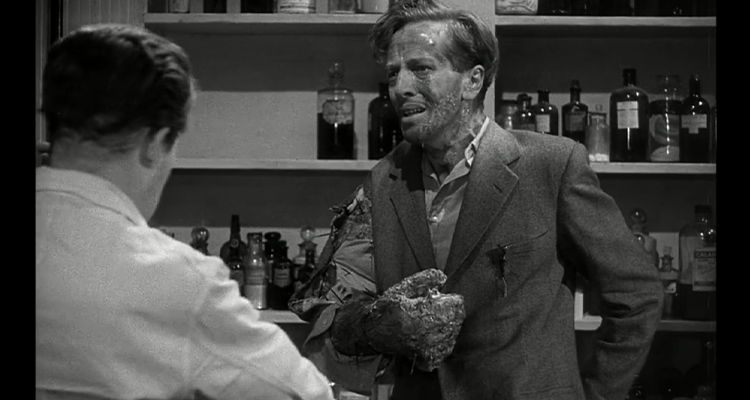 Quartermass is left with no choice but to get the police involved via Inspector Lomax (Jack Warner) to try to locate him.

They eventually discover a pile of gooey matter which may once have been part of Carroon. Clearly something evil is happening.

Bringing the matter back to the lab, they witness its exponential growth. It appears that the alien life that has possessed Carroon’s body intends to take over the world and time is running out.

The Quatermass Xperiment was released in 1955, before human-crewed flights to outer-space. It plays on the themes that were so prevalent in 1950’s sci-fi horrors, brought on by Cold War paranoia. If we send humans into space, what could they bring back with them?

The film is more than just a horror sci-fi, however. It is also detective story, and both sides of the chase are explored. 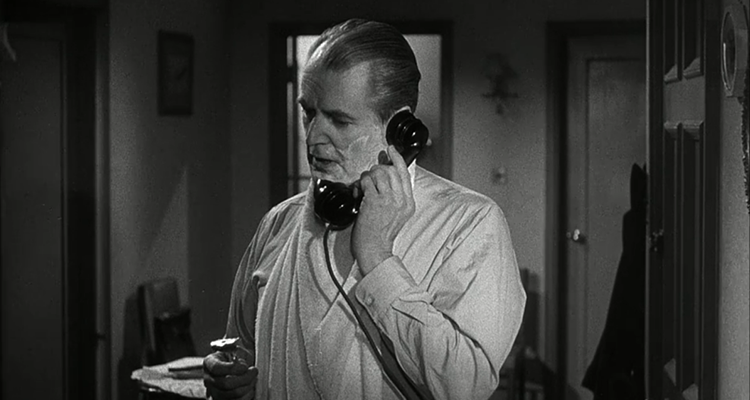 The importance is placed on the scientists. The time spent on showing the transferring of stuff between beakers and the pinching of the skin, gives the film a sense of believability.

Quatermass is more of a direct, unempathetic object. He barks at people while beating through administrative barriers. He is a template that evolves into Hammer’s Baron Frankenstein. 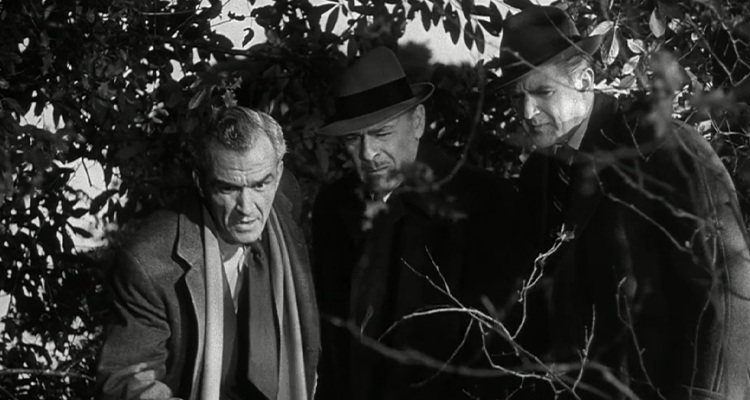 At the same time, Judith is efficient as a spoiler element, committing to rehabilitating her husband from home, oblivious of the danger he poses.

Val Guest keeps the film moving but it is not at the expense of ambience, which is well suited to the bleak black and white cinematography.

The music from James Bernard, who would go on to score many Hammer Gothic horrors, adds to the film’s suspense.

The Quatermass Xperiment is an eerie and enjoyable sci-fi horror. It is worth checking out – even if you are not a fan of Hammer.

The Quatermass Xperiment is streaming now on Amazon Prime.