My Neighbor Totoro – God of Death?

I think we can all agree that Japanese animation giant, Studio Ghibli, produce some of the most beautiful and emotive films the world has ever seen.

Although incredibly popular in Japan, it was their films Spirited Away and Howl’s Moving Castle that really brought them to the attention of the West. Quite simply, founder and frequent filmmaker, Hayao Miyazaki, is a genius.

One of Studio Ghibli’s most popular films for younger children is 1998’s My Neighbor Totoro. Although, here, this film is maybe not as popular as Spirited Away, the titular Totoro is as recognisable in Japan as Mickey Mouse. In fact, Totoro even serves as part of Studio Ghibli’s logo.

My Neighbor Totoro is a film about two young girls, Satsuki and Mei. To be closer to their ailing mother, they move to the Japanese countryside with their father, and there they meet and befriend a giant spirit of the forest named Totoro.

On the surface, the film is fun and playful, and is a happy children’s animation. The subtext, however, is much deeper.

My Neighbor Totoro deals intelligently with themes of grief, loss of innocence, and the potential harmony of the modern world with that of the spiritual one and nature.

However, there may be even more to it than that – something much darker if you dig deeper. 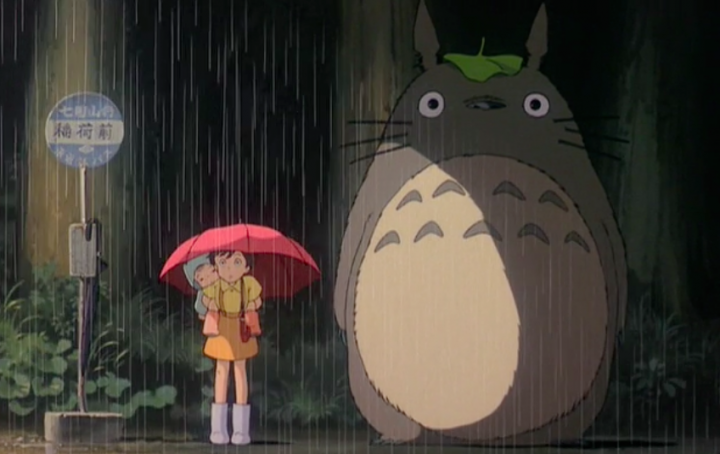 I know, I know. But this one is a little different to the normal internet baseless speculation. This one really does have some grounding.

It’s worth noting that Studio Ghibli is on record as stating that this theory is absolute nonsense. And yet the theory persists…

In the last act of the film, Mei overhears how sick their mother is and runs away. The search party finds a shoe by a nearby pond. Satsuki denies it belongs to Mei and turns to Totoro for help to find her.

When she is found, they go to their mother’s hospital and watch her through the window from a tree. In the end, their mum recovers and all the children play at home.

The theory, however, turns the happy ending on its head. It claims that Totoro is actually the God of Death and can only be seen by the dead and those who are close to death.

In this theory, Mei actually drowned in the pond and Satsuki, not able to face the truth, lies that the sandal isn’t her sisters. She then goes to Totoro, who allows her to pass into the realm of death to be reunited.

The mother thinks she feels them at the end because she is near death herself. The ending takes place in the afterlife, where they are together forever.

That’s an interesting theory if nothing else, just based on the girls (and possibly mother) being the only people to see Totoro in the film. However, there is plenty of possible evidence to give it credibility. There’s also plenty that’s a stretch too far. I’ll be concentrating on the better ones here.

First up are the soot sprites (Susuwatari). These cute little black balls live in the old house that the family move into. 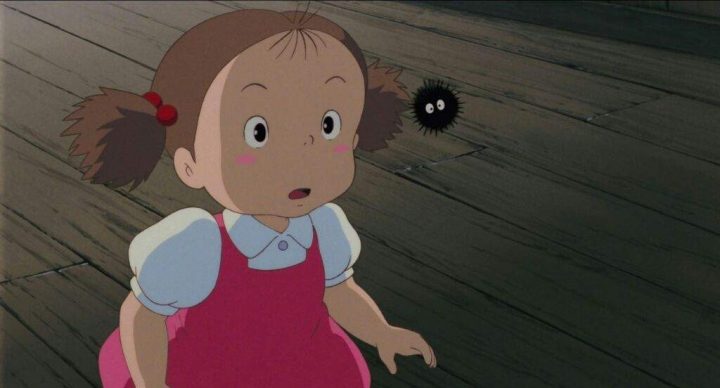 Towards the mid-point of the film they fly away, presumably because of all the noise made by the house’s new residents. Some people believe that these sprites represent spirits in Japanese folklore, such as Shinigami, that appear to people who are close to death.

However, if this were true, surely their dad would have become much more protective of them? But that doesn’t happen, and Mei and Satsuki continue to have free run of the fields and forests around their home. (Top parenting there.)

The example that I think is possibly the strongest evidence revolves around the Cat Bus. The Cat Bus is exactly as it sounds; a giant furry cat that is also a bus, serving the spirits of the forest. 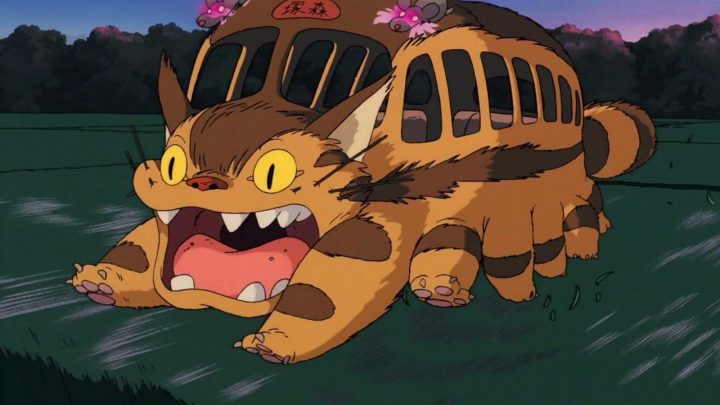 They first meet Cat Bus when they are waiting in the rain for their dad at the station, only for Totoro to appear and wait with them for his furry ride.

The so-called ‘evidence’ here is that one of the destinations on the front of Cat Bus translates to literally ‘Grave Road’. Now, this one I can’t confirm, as I can’t read Japanese, but several sources online quote it as evidence.

It could of course be complete rubbish, but if it were true, why on Earth would it be put into a children’s film, unless they were hinting at something else?

The next piece of supporting evidence, to be honest, I do find a bit of the stretch.  I’ve personally never noticed this, but apparently at the end of the film Satsuki and Mei do not cast shadows. And who has no need for shadows? Ghosts!

What other explanation could there be? Well maybe the animators just forgot to give them shadows, or maybe the scene was set at noon? I believe Studio Ghibli actually responded to this one by saying they felt that shadows were not needed in this scene.

This one’s a no from me, but it’s possible.

We’re back to the cute little soot sprites now. Just consider for a moment that they do indeed represent spirits that appear to people who are close to death. And, let’s just assume for a moment, that Totoro is a death God.

There is a scene in the film, where Satsuki is running to Totoro so she can find Mei. She is literally running towards death. And, guess what? Those cute little soot sprites appear one last time on the path she’s running on. Spooky!

The last element of this theory that I find really compelling is when Satsuki finds Mei towards the end of the film.

Mei is sitting by a collection of stone pillars that are used as memorials for the dead. If Mei were dead, would it then follow that she would be attracted as a spirit to a place like this? 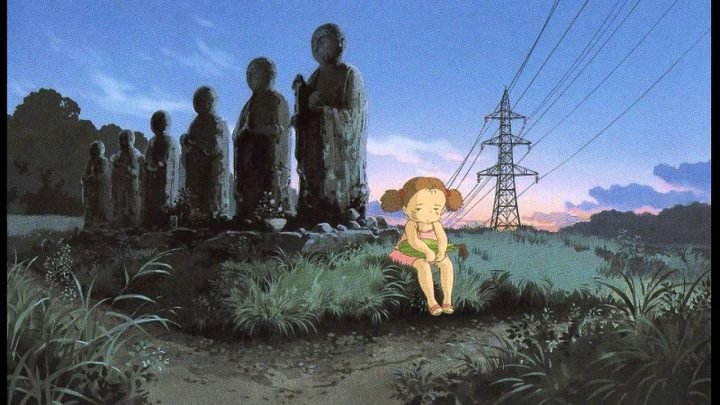 It could, of course, just be a massive coincidence and means nothing. She could have been found anywhere, but she was found in a sort of graveyard. The really interesting thing is that when you add all these things together, it becomes difficult to dismiss the theory entirely.

Overall, I don’t buy it. I think My Neighbor Totoro is exactly what Miyazaki says it is, a film based on his own experiences of being evacuated to the Japanese countryside as a child.

For me, the two biggest supporting factors of the theory are the translation of the Cat Bus destination and where Mei is found. But, that really only adds up to one piece of evidence.

If she’s sitting on the grave road, it makes sense that that’s where Cat Bus takes Satsuki to find her. It’s also important to remember that Japanese culture has a strong connection to the spirit world, ancestors, and honouring the dead. So, Mei being found in a graveyard is more comforting than scary.

And what becomes of the soot sprites? Well, they suddenly found themselves homeless and, when they leave, they do fly towards the forest. I think they just decided to make their new home with Totoro.

To me, Totoro is a big furry lovable forest spirit. But, give it another (or first) watch and decide for yourself.

The theory, although most likely nonsense, gives a whole new creepy viewing experience to the film. And, who knows, it may be true after all… 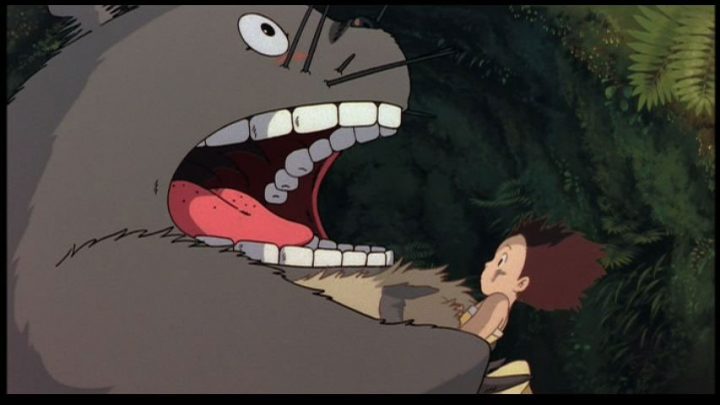