“The Unfinished Tales” are a series of monologues, released every other Friday, focused on ghost stories. Each monologue is its own unique story; from cursed photographs to the creaks and cracks of noises in the night, each story has been crafted in collaboration with the actors involved.

There are many different meanings and reasons for ghosts; some have business still left on earth, some just want us to know they’re there and some aren’t what they appear. After all, death isn’t always the end… 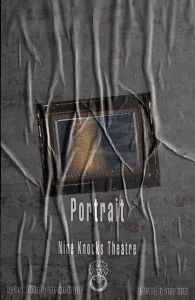 Portrait follows the story of Chris (played by Conor Ferns), a young man who has just finished cleaning out his recently passed Grandfather’s house. When cleaning the house, he discovers a strange framed picture he has never seen before. As he returns to home, it soon becomes apparent the picture is not what it first appears and that something has followed him.

Daisies follows the story of Stephen, a father recalling the events of both the loss of his wife and the birth of his son. After eventually coming to terms with the loss, a few years later Stephen is thrown into a world of fear and anxiety when it seems his wife has come back.

Rainbow follows the story of Jamie, a young girl dealing with the recent loss of her brother, Lewis. Both Jamie and her family are devastated by the loss and would do anything to speak to him one last time. But when Lewis’ voice starts coming back through the radio at night, they begin to wish they couldn’t hear him.

Nine Knocks was established in late 2019 with a focus on horror theatre – a genre they feel doesn’t get enough recognition and love. The company was created with the intention to change this. Since their establishment, they’ve strived to create work that frightens, excites and leaves an impression on audiences long after the lights come back on.

In 2020, Nine Knocks created an online adaptation of Henry James’ classic ghost story The Turn of the Screw as part of ‘Online@theSpaceUK’ – a festival established to showcase works that were unable to perform at the Edinburgh Fringe Festival. Amazing reviews were received from both audiences and critics, with the show going on to be awarded an ‘OnComm’ from OffWestEnd.com, which recognises excellent online works created during the first covid-19 lockdown.

Nine Knocks love creating horror theatre and it’s something the entire creative team is passionate about and driven to expand upon. They hope to continue creating exciting works, with plans to keep releasing work both online and at festivals and theatres wherever possible.