M.R. James is a name steeped in history, horror and expectation. The author of countless classic ghost stories, James created many of the modern ghostly tropes that we still see in literature and cinema today. Adapting his work has been a long tradition in Britain, with the BBC themselves having cultivated a crop of bone chilling tales derived from his classic works of horror that pepper the screens during the festive period. 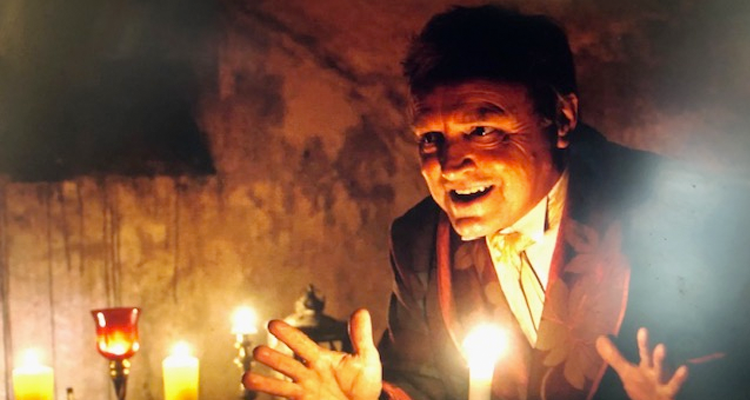 Lost Hearts, here adapted for the stage by Michael James Ford and Stewart Roche of The Curious Ensemble, is a tale that I have long regarded as one of his finest. So, my expectations going into this filmed performance of a stage production had to remain tempered with hope and braced for interpretation.

Thankfully, with the wonderful setting (filmed in the gorgeous Roundwood House), interesting performances and brilliant sound design I felt as though I had travelled back in time to the 1900’s to bear witness to one of James’ darker stories.

Set in London, 1903, we follow Stephen Elliot (Kyle Hixon) as man struggling to hold his life together. In danger of succumbing to a dangerous opium addiction, Stephen avails himself of the services of psychiatrist Doctor Olsen (Michael James Ford) who, through the use of hypnosis, digs into the past trauma that Stephen has buried deep within himself. 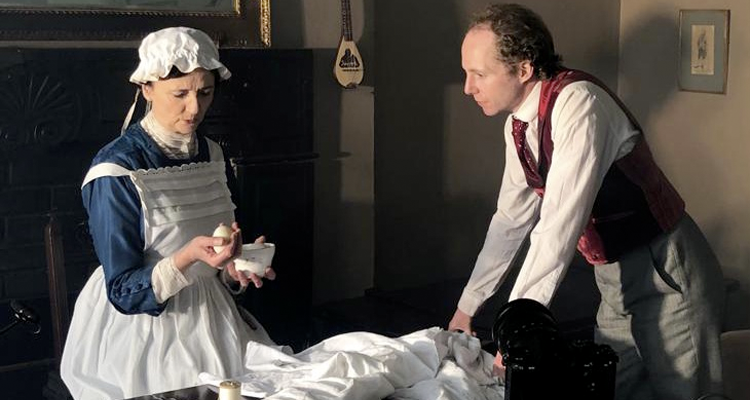 Travelling back through time, we witness events that have led to Stephen’s modern unravelling when he lived as a boy with his Uncle on the enormous grounds of the solitary Aswarby Hall. Haunted by the ghosts of previous inhabitants, Stephen slowly uncovers the truth at the black heart of his malady and in the process confronts a dark, unspeakably occult secret hiding beneath the opulence of Aswarby Hall.

Ford and Roche’s interpretation of Lost Hearts hits all the right beats; running at under forty-five minutes, they keep proceedings moving quickly and really make the most of the gorgeous grounds they are able to film in. From sun-kissed green fields to dark, dank and ominous cellars lit only by candle-light, the piece looks terrific throughout.

The minimalist cast all pull double duty and rise to the challenge well. Michael James Ford plays both Doctor Olsen and Stephen’s avuncular uncle, and it is to his credit that it took me a moment or two to realise. His bombastic performance as the Uncle stands in sharp contrast to his measured portrayal as Doctor Olsen, a man of science forced to confront the boundaries of his own belief. Bairbre Ni Chaoimh doubles as Dr Olsen’s assistant and as the kindly housekeeper who looks out for Stephen when the night terrors become all to tangible. She is a sympathetic presence who brings a sense of safety to proceedings, even when safety seems very far away.

In the central role, Kyle Hixon has a lot of work to do as Stephen Elliot. Spending most of the runtime portraying an eleven-year old boy, I was initially concerned that the idea of a fully grown adult playing a child may stray too far into Dear Evan Hansen territory, but the conceit that we are watching the memories of the adult Stephen play out actually makes this decision quite a deft one. The part calls for an actor to portray a broad range of emotions that may prove challenging for a younger actor, and after a moment or so of concern I was engaged with an interesting performer pushing outside his comfort zone. 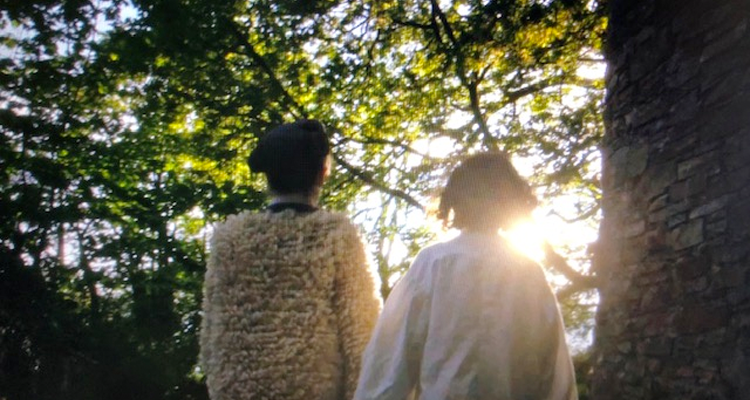 The music in Lost Hearts is wonderfully suited to the piece. A two-man performance (Philip Dodd and Donal Wallace) of violin and cello create a striking mood, the sharp pinching strings able to offset their more sedate moments when the horror truly gets going. And the overall sound design of the story builds the world around the performers well, with horse carriages trotting along just out of site and the spine-tingling laughter of invisible children arriving when least welcomed.

Anyone familiar with M.R James’ work may know what to expect going in, but sometimes a lot of joy can be found in enjoying a well told tale regardless of its familiarity. Lost Hearts is a favourite of mine, and after viewing The Curious Ensemble’s piece it may become a favourite of yours too.

Lost Hearts will be streamed by Dunamaise Arts Centre on 1-3 October and by various venues around the country. Also keep an eye out for live performances later this year.