Set in 1645 Essex, The Witchfinder’s Sister follows Alice Hopkins as she returns home to Manningtree to stay with her brother Matthew, after the death of her husband. Mathew has changed since his sister’s years of absence, and under the shadow of the death of their mother, Alice discovers her brother’s dark new profession that has afforded him wealth, power and infamy across the towns and villages of Essex. 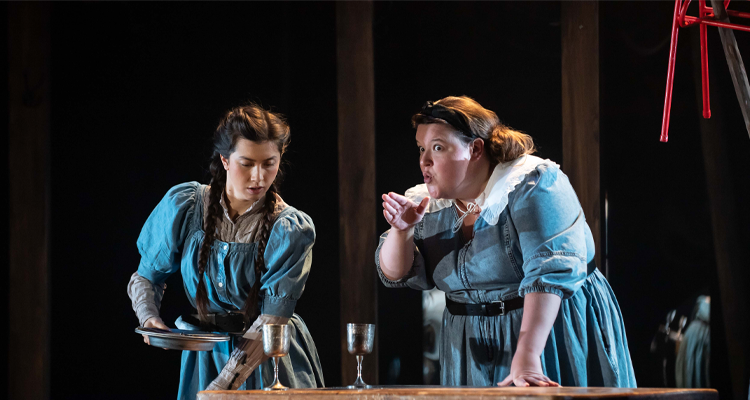 Matthew Hopkins is of course the infamous Witchfinder General, who presided over more deaths of accused withes in the course of two years, than in the entirety of the previous 100 years. And though many people will know Hopkins’ story from the Tigon Horror film starring Vincent Price, for the people of Essex, tales of Hopkins run deep in the collective psyche as a tale told across generations. Coming from Essex and as a connoisseur of witchcraft and the occult, I was extremely excited to watch this new play.

The first half of The Witchfinder’s Sister was excellent and had me suitably hooked by the interval. Each character was given space to slowly unveil to us who they were and what their motivations may be. We were shown the fraying relationship between George Kemp in a relatively minor role as Mathew Hopkins and Lily Knight as his sister Alice. Jamie-Rose Monk as stern housekeeper Mary played wonderfully juxtaposed to the naive and youthful maid Grace played by Miracle Chance. We also question the motherly Debra Baker as Bridget and watch as we start to doubt our trust in her. 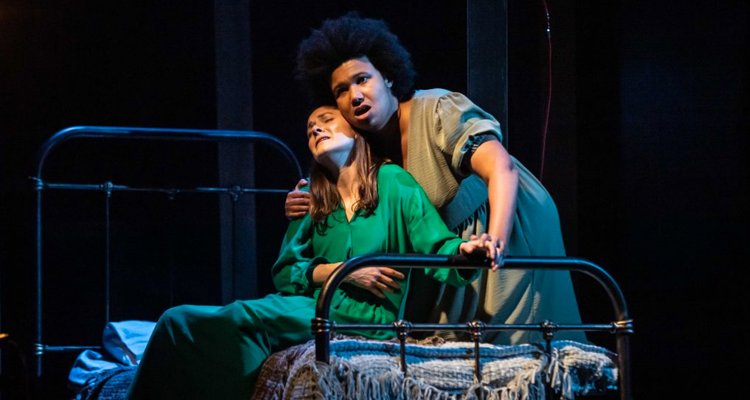 But, for me, the second half seemed more confused and with less direction, almost visiting the cast of characters in a predictable rotation, I lost track of the thread of where I was being lead. The highlight here was the inclusion of Anne Odeke as Rebecca, who though had a passing background role in the first half, didn’t become a character until the second. She gave the second half purpose around which the other players orbited. I would have loved to have seen her introduced earlier in the performance.

The stage design was a marvel – an incredibly clever use of the space gave depth and height to the proceedings. Though quite minimalist, it was easy to imagine the different locations. The witch trials themselves took place in the background of the stage, almost like a shadow of the main front performance. There were, however, some oddities here. The choice of electric lamps and modern clothing for only 2 characters set in 1645 was a strange one. I also found the seemingly random inclusion of some red chairs around and above the set distracting as I tried to work out what it was trying to say. I have my theories, but it did not help keeping my attention every time I noticed one of these oddities.

The lighting design deserves special mention. On a few occasions, scares or moments of extreme stress were punctuated by dazzling white lights. I loved the control of lighting showing us the isolation of characters, segmenting different areas or even showing us the differences between daylight and candlelight. The sound work was also very good and I got a chill every time I heard the chattering of names of the accused witches being whispered around the audience. The sound largely complimented the production, raising tension and anticipation. Though once again, it seemed to lose its way in the latter stages of the second half, transforming to an 80s synth soundtrack reminiscent of Stranger Things. 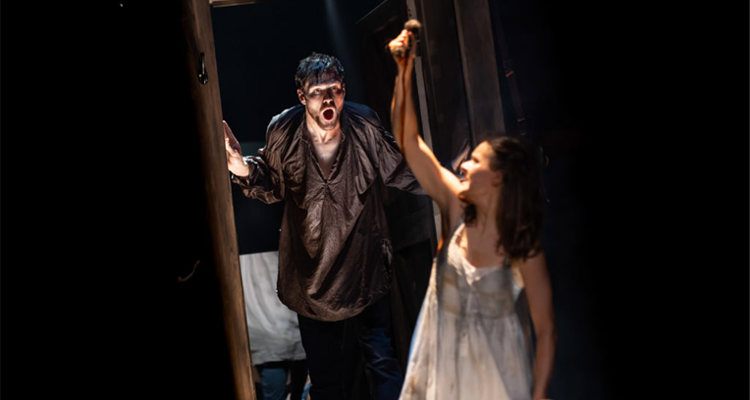 I very much enjoyed the scares in The Witchfinder’s Sister. There are a couple of good jump scares awaiting you (though in my opinion there should have been more), but also some truly harrowing emotionally intense scenes that left me feeling very uncomfortable. In this regard, one of the best scenes is saved for the very end and makes for a ‘was it / wasn’t it’ witchcraft scenario. I must commend Lily Knight for her powerful performance here.

Vickie Donoghue’s adaptation of The Witchfinder’s Sister (by Beth Underdown) is very much a play of two halves. There is much here to admire and enjoy, though there were also some very strange choices in the production that left me bewildered. That aside, it was a thoroughly enjoyable play, and if you are looking for an atmospheric, emotionally charged production that’s rooted in history – then The Witchfinder’s Sister comes recommended.

The Witchfinder’s Sister is running until the 30th October 2021 at the Queen’s Theatre Hornchurch.