Hunter follows struggling writer, Ryan Mitchell who has his big break when he gets the greenlight to work on his comeback project – a sceptic’s guide to the supernatural. 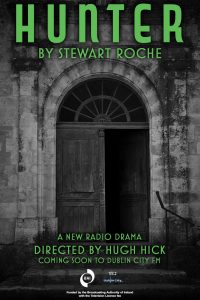 After assembling a team of ghost hunters, he embarks on a mission to find undeniable proof of the existence of ghosts. However, increasingly disturbing incidents and warnings from beyond the grave shake his convictions and make him question everything he sees. And everything he can’t.

Written by Stewart Roche and directed by Hugh Hick, Hunter is a chilling radio play that takes place over three episodes and features a cast of well-known voices, including Aonghus Og McAnally, Lesley Conroy, and Michael James Ford, who bring the script to life with interesting and entertaining characters.

The three-part structure works well with each episode setting a foundation and leaving just enough questions and intrigue for the audience to eagerly switch to the next episode.

Roche is more traditionally known as a playwright and this is his debut radio play. And it is a brilliant first foray into this world.

The characters are well defined, and the accents differ enough to easily identify the assorted characters. I particularly enjoyed Ryan’s agent, Millie who is spot on as a “typical agent” and instantly identifiable. She provides comic relief to the proceedings and quickly gets us up to speed. Dr Fraser is also a wonderful character as the head of the ghost hunting team. He is quirky, funny, wise, and stubborn. And his rant about soup from a can made me laugh out loud. I feel like he’s based on someone we all know and love. I could happily listen to a radio play just about him and his ghost hunting adventures.

The sound design by audio-dramatist and composer, Roger Gregg is used sparingly at exactly the right moments, whether it’s the creak of a door, the crunch of gravel or the howling of the wind setting the scene as the team come across spooky spectres.

“…it should scare the hell out of you…”

After listening to all three episodes, I’m left with some questions, particularly around Ryan’s relationships with Thompson’s daughter and Laura. I also wasn’t clear how Ryan came up with the idea for his book. We’re aware that he was an alcoholic so obviously he’s been through a lot. I would’ve liked more of Ryan’s back story as he’s the protagonist, but I ended up more interested in Dr Fraser.

The ghost stories the characters shared, alongside the unfolding of the main ghost story and the use of Ryan as a narrator, were inspired dramatic choices. And the ending is understatedly spooky.

“I don’t believe in ghosts…”

Halloween may be over but, as the dark nights are now upon us, I highly recommend turning off the lights, settling in front of the fire, and listening to this play through headphones. There are enough jolts, scares, and unease to ensure you head to bed feeling thoroughly unsettled.

All 3 episodes are available at soundcloud.com/hughhickproductions.