Nothing gets our blood pumping more on a beautiful, sunny Sunday than the prospect of sitting in a dark cinema watching some grizzly goings-on.  Which was why we were delighted to accept an invitation to check out a showcase of 3 films by the hugely talented Martin Stocks: The Clown Attacks, The Ex, and his latest: Toll Booth.

It was great to be able to check out Martin’s work alongside his loyal cast and crew. There’s something quite awesome in having the same group of people work together on multiple projects — it lends an air of consistency to the films which certainly showed here.

We’ve actually already had the pleasure in screening The Clown Attacks at a London Horror Society short film showcase towards the back end of last year. We loved it then, and we still love it now!

This ‘silent’ film tells the story of a clown (played magnificently by Andrew Shire – a mainstay in Stock’s work), who is having a rather hard time being himself amidst the much-publicised “Clown Attack” phenomenon.

What follows is a delightfully dark 5 minutes of farce, with strong performances throughout. A huge nod must go to Ed Harris (no, not that one…) whose creepy score carries the story perfectly.

Next up was The Ex, which is co-directed by Gareth Brown.  This is again more comedy than it is pure horror, but that’s certainly Stock’s strength, along with the rest of the cast  it seems! Andrew Shire once again stars in an altogether different role this time around, as a chap on a first date who is seemingly suffering with some rather extreme nerves… or are they?

No-one likes to be compared to an ex at any point in a relationship, but what if said ex was actually trying to sabotage your date from beyond the grave?  Hardly one you’re going to tell your mum about is it.

Again, Shire steals the show with his impeccable comic timing and a brilliantly expressive performance. A strong script also provided some genuine laugh-out-loud moments, along with a neat, dark little twist at the end. 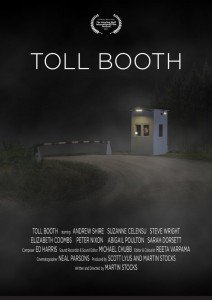 Toll Booth is Stock’s latest short, and probably his most accomplished too.  This film features his biggest cast and most challenging scenarios to date, and the end product certainly suggests he can step up to the plate.

The film is focused on Terry (yep – Andrew Shire again), who, following his predecessor’s disappearance, is sent to work in an isolated toll booth somewhere in what I imagine to be rural Yorkshire.

As he starts to explore his new surroundings (his curiosity mainly fueled by boredom), Terry starts to get the feeling that there’s something rather sinister lurking in the surrounding fog…

The story starts to unfold when the supporting cast begins to roll up to the window to pay their rather reasonably-priced £1 charges.  Again, performances from all corners are strong, and the pacing keeps you suitably intrigued until the very end.  Harris is also on hand to provide a great score, which only adds to the suspense!

You can now check out The Clown Attacks on YouTube — be sure to give it a watch! The Ex is now hitting the festival circuit, with Toll Booth sure to follow.  We’ll be sure to keep you in the loop as to where you can catch them near you!