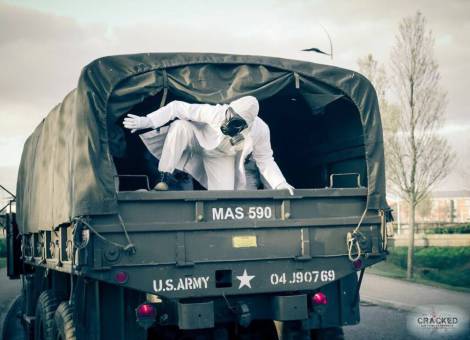 Brutal, disgusting, mind-bending, exhilarating and demanding; that’s how I would describe Cracked in five words, although words don’t justify the plethora of emotions that were evoked. You may remember the name from my preview of what’s being dubbed as the UK’s most extreme survival event, but now I have experienced the terror and somehow lived to tell the tale.

After becoming obsessed with the infamous McKamey Manor, my mind was determined to find something closer to home that would potentially traumatise me for life. That’s when I discovered Cracked: Survival Experience, a horror event that combines mental and physical elements, to create a unique game and experiment where you really have to push yourself to your limits.

The build up to the event has been incredible, with creators Blake, Rosalie and Darren trying to get inside our heads, play mind games and pit us off against one another. Being able to communicate with our other competitors has not only created a family vibe, but it gave Cracked a chance to really understand our personalities and play on our fears.

Whilst traveling to the pick up point in Wakefield, I was genuinely terrified with my heart pounding and my hands getting so clammy I could barely roll the million fags I smoked before hand. We were then thrown into the deep end as the most badass truck arrived, and out jumped the crew donned in gas masks, white overalls and doctor uniforms. Cabled tied, hooded and disorientated we were taken to the secret location that was definitely in a place where our screams would never be heard. I did wonder if my Dad was right about it actually being a snuff movie… 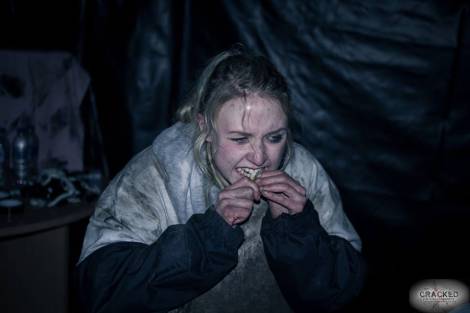 What made this event so thrilling was the fact we knew next to nothing about what we’d be put through, and once there, I think we all realised that this was a challenge that would be really bloody hard. Forced to play physically persevering games, along with games of luck, stamina and how strong your stomach is, players were eliminated one by one.

I’d like to say how many thoughts were running through my head, but there were none. My mind was so focused on getting through the freezing, sodden and disgusting games that it was blank, completely devoid of anything relevant. One particular game was so rancid that I definitely ended up with sick running down my chin, and tears of pain running down my cheeks. At this point I wish I’d completely lost my sense of taste and smell, it was a putrid situation.

Competing as one of the last three contestants left me breathless, sobbing and exhausted with battered and bruised knees paired with some nasty friction burns on my face. Never in my life have I had to exert my body and mind to such gruesome extents, but it’s a game of mind over matter, and will power carried me into the winner position. I may have won the games, but I called the safe word once and I was unpleasantly and unwillingly put into a few of the deranged experiment pods. 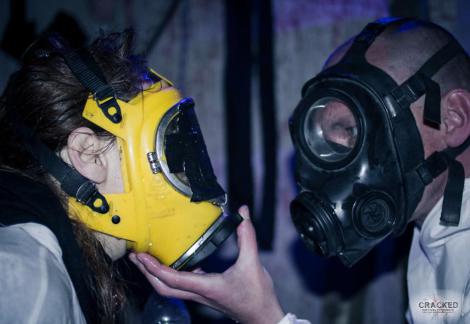 Cracked is an experience like no other. It’s an eclectic mix of adrenaline, physical endurance, mental torture, mind games, trickery and excitement. This intense horror event is not for the weak minded, armed, legged or stomached. You need balls to participate, and a twisted mind to find it as awesome as I did. I’m currently having withdrawal symptoms and would offer unlimited tea in return for someone to tie me up, hood me and treat me like we’re in a Hostel movie.

The creative team, Blake, Rosalie & Darren, behind the event exceeded my expectations with Cracked, and proved that they have real talent when it comes to producing an extreme haunt in the UK. This is not an imitation of similar haunts in other countries; this is an original idea, executed incredibly well. The rest of the actors involved really know how to portray the tormentors as they man handled us, made us feel worthless and laughed in our faces when we pleaded for them to stop. 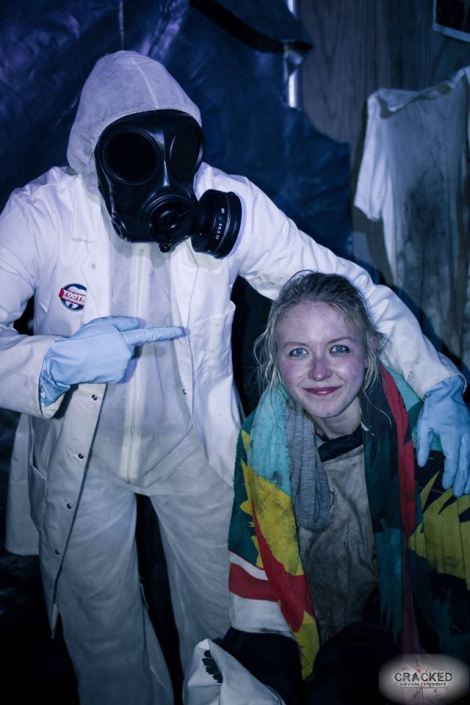 If you’re looking for the most brutal horror event in the UK, then you’ve just found it. Unfortunately, Cracked has closed it’s doors for now, but there is no doubt that they’ll be rearing their perturbed heads again when they bring more carnage to willing victims after such a successful first run.

I’ll be waiting in a dark, revolting box with my hands, feet and mouth bound for the return of the best and worst experience I’ve ever had in my life.