This year, a number of undisputed horror classics will celebrate a milestone birthday, including George Romero’s iconic Night of the Living Dead, Ingmar Bergman’s The Hour of the Wolf, and Roman Polanski’s first Hollywood film Rosemary’s Baby.

These films, alongside many others, can enjoy their mid-life crisis as they gracefully turn 50, safe in the knowledge that they still manage to scare us.

Polanski’s film, which is the focus of this review, was based on the bestselling book of the same name written by Ira Levin a year before its cinematic release. The story follows Guy and Rosemary Woodhouse (John Cassavetes and Mia Farrow) as they move into a new apartment in a building whose history is nothing but gory – cannibalism and murder are just the cherry of the cake.

But despite the building’s reputation, Guy and Rosemary decide to move in and soon enough befriend an elderly couple, Minnie and Roman Castevet (Ruth Gordon and Sidney Blackmer), who at first seem very friendly with their only flaw being their overbearing friendship, which becomes a joke between the Woodhouses.

However, out of nowhere, Guy starts to actually enjoy the older neighbours’ company, and as a result, Rosemary starts to sense something is wrong… and she couldn’t be more right. Minnie and Roman are a part of a Satanist group that promised Guy good fortune in his acting career if he gave up Rosemary’s first unborn son. He accepts the trade and allows his wife to be raped by Satan in her sleep, thus being impregnated with Satan’s brood – Adrian.

However, because the film plays with ambiguity, neither Rosemary nor us — the spectators — are certain of those suspicions, and Polanski unfolds the mystery throughout the 136 suspenseful minutes of the feature.

Throughout the years, Rosemary’s Baby has consistently appeared in lists of the most important and influential horror films in history, like Steven Jay Schneider’s 101 Horror Movies You Must See Before You Die, Rotten Tomatoes’ Top 100 Horror Movies and The Guardian’s The 25 Best Horror Films of All Times. It has also been the subject of many reviews and articles about horror genre, especially due to its grotesque plot, which Roger Ebert described as “unthinkable danger”. 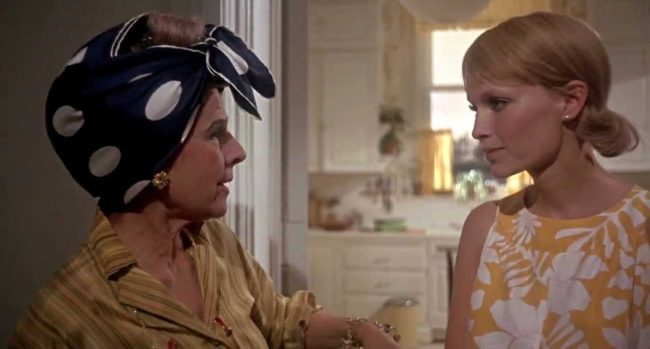 Nonetheless, some theorists and critics have put forward the idea that Rosemary’s fears are a product of her mind, explaining everything with the possibility that she suffers from schizophrenia. This idea is supported by the unnerving atmosphere that is created by the realistic setting and the impossibility to actually pinpoint the origin of the danger.

Despite these different approaches to the plot, both the film and Levin’s book offer more reasons to believe that Rosemary’s fears are real rather than being derived from a mental disease. After all, despite the fact that of all of her suspicions could have a reasonable explanation, together they entail a succession of coincidences that are completely unnatural. Moreover, the film provides a closure and confirmation to Rosemary’s fears when she encounters her child for the first time.

The use of the diegetic scenario combined with the calm colour palette, musical score, performance style and dialogue type eases the spectator into the film and story. But as the narrative unfolds, Polanski disrupts the feeling of easiness by the suggestive use of objects, the claustrophobic cinematography, the deterioration of the protagonist’s state, and the growing sensation of displacement created by Rosemary’s suspicions and the other characters’ behaviour.

Thus, he creates an atmosphere in which the viewers are constantly asking themselves whether Rosemary is having a mental breakdown, whether Roman and Minnie are indeed Satanists, and whether Guy has actually joined a cult. But the film withholds the answers until the very end, therefore leaving Rosemary with a constant sense of eminent danger and evil, but more importantly, with a sense of self-doubt that extends to the audience. 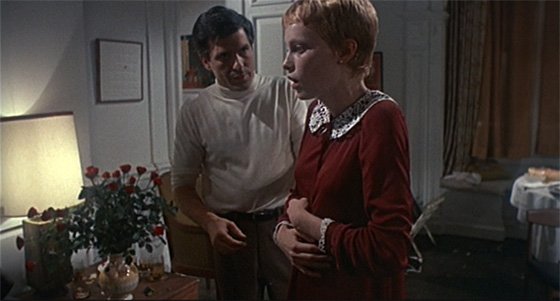 Since we are immersed in Rosemary’s point-of-view and no other character is explored or developed the way she is, we believe her and we stand by her side. Also, as she is cut off from her friends and becomes more and more isolated, we become her only companions, walking with her throughout the uncertainty of her own destiny. Therefore, every suspicion Rosemary has is heightened by our alliance to her, and we make the conscious decision of standing with her.

Rosemary’s Baby is not the traditional horror/scary film as it is not traditionally frightening, nor filled with gore; and there are no jump-scares or the sight of a monster. But it is unnerving exactly because of that. We sense something is not right, we understand why Rosemary is becoming more and more nervous, yet we cannot explain the reason or the origin of our worries.

By the end of the film, our suspicions are confirmed when Rosemary sees her baby for the first time. Although we don’t see it for ourselves, when we see the reaction shot of Rosemary’s horrified face after seeing her child for the first time, it is possible to make out that Adrian is indeed a monster. Moreover, during the same scene, the characters of Minnie and Laura-Louise (Patsy Kelly) call Rosemary’s attention to Adrian’s hands and feet, hinting that there is something abnormal with it.

Bizaarely, the ending caused an angry reaction from so many people because of its ambiguity and lack of gore. But for me and many others, that’s exactly why the film works so well. Polanski doesn’t feel he needs to prove anything, the image of Adrian that we make up in our minds is worse than anything he could have done on film 50 years ago.

Mia Farrow’s desperate portrayal of Rosemary plays perfectly well when in contrast with John Cassavetes’s representation of Guy, as he stands ashamed and unable to look his wife in the eye. And even 50 years later, even though we still haven’t seen Adrian’s eyes, feet and hands, we are terrified by his existence.

Rosemary’s Baby started a chain of films with Satanist storyline; moreover it settled the trope of “something-bad-happened-in-this-place-but-nevermind-this-let’s-move-in-anyway”. Watching this film in 2018 is still deeply unnerving, and it will leave first-time spectators with a feeling of true discomfort. Happy 50th Birthday to a true horror masterpiece!