In the words of John Matrix (Go home now if you don’t know who that is) “WRONG!”

80s cartoons were not harmless fun. You may remember them as 30 minute pops of rainbow colour action that taught morals, but there were some true moments of horror to be found. I suckled at the teat of 80s cartoons.

I was raised on a steady diet of 90s cartoons. And by the 2000’s, I probably should have grown up and stopped… but like HELL I did! So with that, I give you part 1 of my 3 part look at the scariest ever kids cartoons; My Top 5 Scary 80s Cartoons for Kids.

Right… Hear me out! Super Ted is really scary (though I concede this may just be me).

For those of you who don’t know, Super Ted was an abandoned defective Teddy Bear from a toy factory, brought to life by an alien ‘Spotty Man’ and then given ‘special powers’ by ‘Mother Nature’ on a space cloud.

Clear so far? Every week Super Ted battled baddies and generally saved the day from some minor inconveniences. But… there were some horrible episodes and some horrible concepts within the cartoon.

Secondly there’s the fact that Super Ted has to rip off his own skin in order to transform. Now I’m not over emphasising this here (and bear in mind I was 2-5 when this aired), but in order to transform into Super Ted, he literally unzips his front and leaves his skin on the floor (normally with that weird grin across his face).

Let’s not forget some horribly uncomfortable episodes, too. The main one that sticks out for me is Super Teds Dream from 1984. Just horrible! Bulk as a giant baby menacingly crawling towards Ted as he desperately tries to transform but can’t, peeling off layer after layer of skin to no avail. Thank goodness it was just a dream. 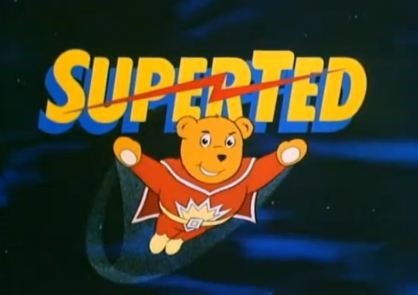 This one boils down to one simple thing; Mumm-Ra.

Think about it… Mumm-Ra (apart from being one of the most awesome baddies of all time) is a rotting mummy. He also happens to have the ability to turn into a muscle-bound super zombie by invoking the ‘Ancient Spirits of Evil’. If that isn’t scary and cool in equal measure, I don’t know what is. In his mummy form he’s creepy. In his powered form he is scary.

The premise: Lion-o Lord of the Thundercats escapes the destruction of home world Thundera under the guidance of ‘know it all father figure’, Jaga. Somehow he ages to adulthood on his journey through space (while no one else ages at all) and then leads his group of survivors against the forces of evil on their new home, Third Earth.

The Thundercats face many enemies and many trials over the course of the series, but none are as great as that of Mumm-Ra. Unfortunately, despite how scary he is, Mumm-Ra has never been particularly successful in his plans against the Thundercats.

I prefer it when he is in his pre-transformed state and, for me, his weaker ‘mummy’ version is the creepier of the two. He has a very sinister voice and, sliding in and out of his sarcophagus in the black pyramid with his hood partially covering his face, is also the stuff of nightmares.

Mumm-Ra’s process of transformation is also worthy of a chilling note. The incantation, the glowing eyes of the canopic like Ancient Spirits, and a wind from nowhere that blows his robe open to a degree befitting a classic Carry On film.

Now say it with me; “Ancient spirits of Evil… transform this decaying form… to Mumm-Ra, the Ever Living!! Yarrrrghhhhh hahahah!….” Ahem, excuse me. 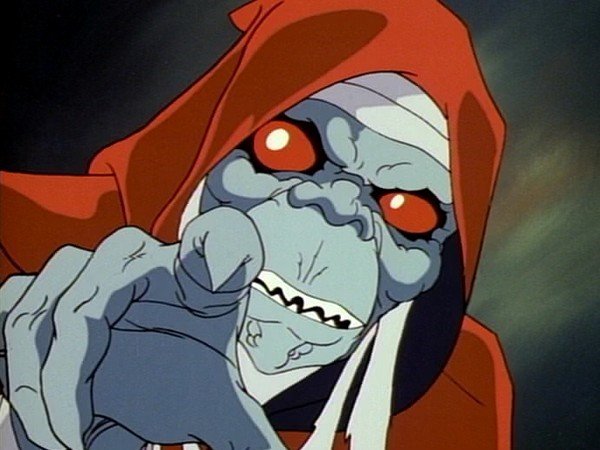 Ah Dungeons & Dragons. I absolutely loved this cartoon. Yeah, bad guy Venger was pretty scary, but that’s not why D&D is on this list. D&D had some really scary episodes that dealt with some very grown up themes.

After riding a Dungeons & Dragons ghost train at the local fair, a group of teenagers are transported to the real life realm of Dungeons and Dragons. They instantly meet primary and secondary antagonists, Venger and Tiamat, the multi headed dragon, and are given magical weapons by the frustratingly vague Dungeon Master.

Each episode following is the gang trying to get home. They have multiple opportunities to do it, but are always stopped at the last moment from ever getting back. That’s right, they never make it home.

There are frequently very scary moments in Dungeons & Dragons. In episode 5 of the first series, In Search of the Dungeon Master, Eric goes off alone and meets a zombie in an extremely depressing swamp. The Prison Without Walls gives us a shrieking plant monster and yet more zombies, and Quest of the Skeleton Warrior introduces us to Dekkion, the agonisingly horrible Skeleton.

But all of that is nothing compared to the series 2 episode The Dragons Graveyard. Here the gang literally discuss murdering Venger. They snap and have had enough of Dungeon Master’s bullshit riddles (and let’s face it who can blame them). Instead, they decide to lure Venger into a trap, whereby they will do all that is necessary to finally end it. Chilling. 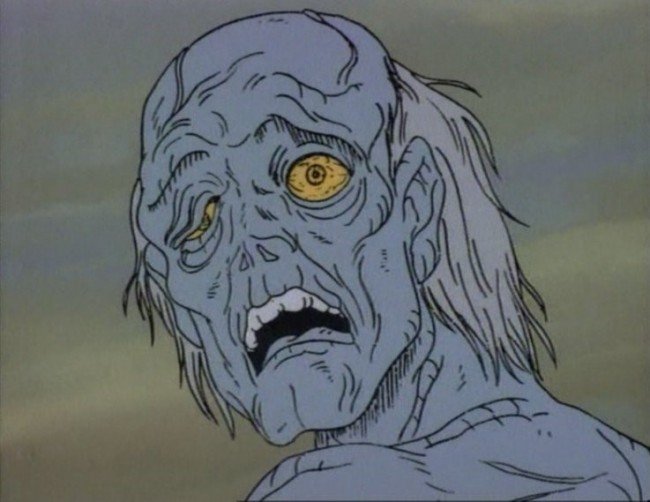 Here we go…. Now we are getting into some ‘Why the Hell would they make that for kids territory’.

Inhumanoids is a strange cartoon. Maybe it was more popular in America, but I don’t think it was particularly well received over here. On the face of it, what could be better than ‘meched-up’ humans fighting giant monsters? Well for one thing, apart from the monsters, it was just damn boring! Zzzzzzz

So what could be so scary for kids, I hear you ask? I’ll tell you. One of the monsters is a lovely yellow anthropomorphic Tyrannosaurus type thing, with red teeth and claws. His name is D’Compose. He has a really horrible voice that gives me chills just thinking about it. Oh and I should add that his head was skeletal and his rib cage was actually a cage that he could open, revealing the red goo inside.

As if that wasn’t bad enough, it doesn’t stop there. In one of the early episodes, D’Compose kidnaps Sandra and mutates her into one of the most scary cartoon villains I have ever seen. A giant mutated skeletal hag. Think of a cartoon Evil Dead and you get the kind of idea.

Yes, it is really as bad/good as it sounds. Oh, and one more thing… D’Compose likes to open up his weird gooey rib cage and carry people around in it like prisoner snacks for a mid afternoon human picnic… nom nom nom. 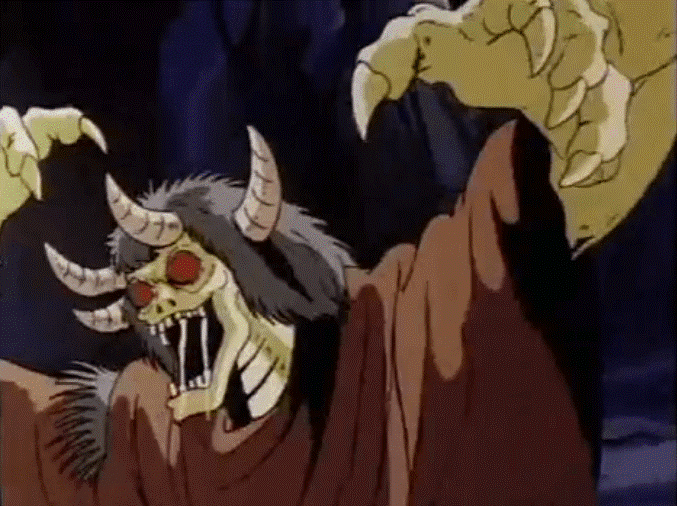 And so to our number 1… The Real Ghostbusters. Not scary is it? You couldn’t be more wrong! Have you actually watched it recently? It’s terrifying! But hey, I thought the same.

I saw it recently on Netflix (other streaming platforms are of course available) and thought I would check it out for a bit of nostalgia. And yes, there are lots and lots of jokey moments and episodes that are silly, but there are times when it really made me nervous to switch the lights off for bed!

The Real Ghostbusters was a cartoon spin off from the hugely successful 1984 film. The premise is largely the same, except there is no Louis or Dana, and Slimer has gone from adversary to extremely greedy, loveable pet.

There really are so many examples in the show (although the early series were far better and scarier) of moments of genuine fear felt by the audience. What’s strange is that, as a kid, I don’t remember ever being scared of this cartoon. And yet, as an adult, it has been petrifying me.

Notable examples include the giant poltergeist in Slimer Come Home, and the horribly voiced (in a good way) Sandman in the episode Mr Sandman, Dream Me a Dream. The scariest episode for me though was the series 1 fright fest; The Boogieman Cometh.

Whoever designed the look of this cartoon demon must have something very wrong with them! He’s horrible! A small body and a giant goblin head with pale blue skin and again, like so much of the scares in this list, voice work that chills you to the bone. Not to mention he spends the entire episode clawing his way out of wardrobe’s and terrorising children and adults alike! 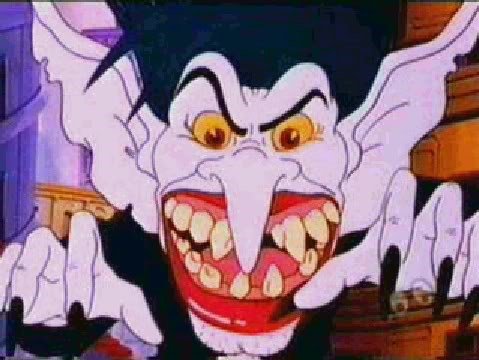