Have You Seen A Lonely Place To Die?

A Lonely Place To Die is a movie I had no idea about when I watched it a few years ago, but one I thought at least sounded interesting in its title.  That coupled with the fact that it stars Melissa George, who has done some pretty ok films (not because she’s good to look at!). 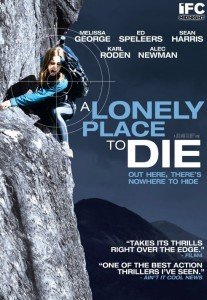 So, the reason I’m writing this piece is mainly to talk about and highlight a film which went under the radar for me, and stands out as a solid film to watch if you haven’t already seen it. There are so many underrated genre movies out there that just don’t get the big-budget Hollywood marketing push, and this is my pick for the London Horror Society as one that should have.

The premise of A Lonely Place To Die is pretty simple, if not a bit out there.  A group of experienced rock climbers, Alison (Melissa George) and Ed (Ed Speleers) join up with Rob (Alec Newman), Jenny (Kate Magowan) and Alex (Gary Sweeney).

On their way to a climb they accidentally stumble across a child, Anna (Holly Boyd), trapped in the middle of the Scottish highlands.  They decide to free her and discover she is Serbian with no grasp of English. Chuck in a couple of kidnappers wielding guns who don’t want the child to get away, and the chase is on. From that point on you are with the group, hoping not to get caught right in the middle of a ransom situation.

You’re treated to some spectacular views of the highlands, as you watch the climbers scaling the mountains.  The notion (and set up for the movie) is that danger looms if they aren’t careful, as summed up by the early quote: “complacency is a killer out here”.

The brilliant camera work allows you to get right in alongside them. The frantic pace of the film is carried well by the terrific actors. Melissa George is portrayed as the most resourceful and toughest of the bunch, and slowly becomes Anna’s protector.  Without giving too much of the plot away, A Lonely Place to Die does really get on the side of this young girl, and you find yourself really hoping that she avoids the clutches of her kidnappers and gets back to where she needs to be.

This is probably the greatest aspect of the film — you care for the survival of some (maybe not all) of the characters. The kidnappers; Mr Kidd (Sean Harris) and Mr McRae (Stephen McCole) play convincing, ruthless and driven kidnappers. You don’t know who is going to survive and who isn’t, and they won’t stop until they get the girl back.  There are falls, scares, jumps, bullets and an anxious fight for survival.

As I said before, it’s shot brilliantly and places you right in the highlands — it’s as if you’re there, willing on the climbers yourself.  It’s raw in its approach and jolts you into action at each event.  It has a simple but effective approach:  create a situation, build some characters to care for, chuck in some fireworks and sit back and watch what happens.  It’s a character driven survival flick which culminates in you really wanting the child to be ok.

You really don’t know what’s going to happen as the film pans out either.  Everyone is running around the woods dodging these kidnappers, and usually the hunter gets his prey. But there are still twists ahead.  Of course, there are some plot holes and the usual comments on odd decision making, but essentially A Lonely Place To Die works.

I don’t remember it getting much hype on its original release, and even if it did get some it wasn’t enough to showcase how good a film this actually was. I watched this and thought, why did I not watch this at the cinema?  Yes, it’s not a 10/10 movie, but it’s certainly one that would have looked great on the big screen.  The majestic scenery would have been immense, the stunts, falls and scampering through the woods would have been right there drawing you in.  At home with the lights off still kind of worked, but it’s really not the same, right? 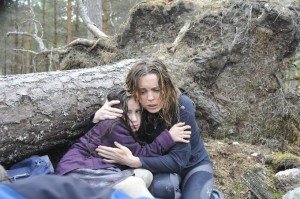 Admittedly, A lonely Place To Die isn’t an out-and-out horror movie.  It’s grim in what it portrays (a child buried alive, being held for ransom), and that alone grabbed me as a fan of the genre.

You’re happily watching a bunch of climbers do their thing, and based on the title you think “ok one of these guys is going to get stuck somewhere and the chase is on to get help before they die”. But then, you see them discover this kid, unable to speak English and scared out of her wits. What do you do?

I felt gripped by it, and really did wonder how it was all going to end.  How will the girl survive? The end sorts itself out really, and you do eventually start piecing together what is going to happen.  But there is a slight twist as to how the bad guys get their comeuppance.

Go watch this if you can, and ask yourself if you were in the climbers position, what would you do and how?