I think we’ve all been there, haven’t we? You’re having a great night out with your friends, you have a few too many shots, and then you find yourself locked in a cubicle with your head down the toilet. 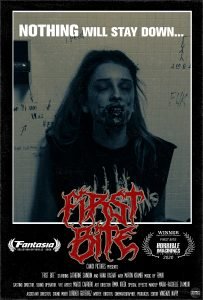 Well, that’s our first impression of First Bite when we open on poor Alex (Catherine Saindon) heaving her guts up in a rancid looking bathroom with heavy metal regurgitating through the walls.

As a metal fan, I know this bathroom. I’ve been in this bathroom. Everything is familiar from the graffiti to the gig posters plastered all over the walls to the dirty toilet to the barely legible band name (Columns?) on Alex’s top. The only unbelievable aspect of this set is that there’s toilet paper rather than an empty roll.

Her friend, Olivia (Hana Kashaf) is on the other side of the door, offering support but quickly becoming annoyed at her friend for cursing her.

Alex is so hungry but can’t keep anything down, even the granola bar Olivia helpfully offers her. There’s blood in the toilet bowl, blood running down her chin, and an open wound on her arm. Us horror fans know that can only mean one thing and pray that the bathroom door stays firmly shut. I don‘t want to spoil the ending for you but it’s safe to say Alex find herself satisfied by the end…

Short and anything but sweet, First Bite is Canadian Director, Vincenzo Nappi’s sixth short film. Also a writer and editor born in Montreal, Quebec, he is best known for his first short Is Your Daughter Home.

I love the grainy, almost fuzzy overlay to the film. It really adds to the whole theme of dark, metal, and death. There is a distinct lack of colour. The lighting is white on black and black on white with spots of colour such as red lipstick and a green light off to one side (and green always means evil).

There is a demonic voice that we feel only we and Alex can hear, calling her to the other side, the dark side. As Alex becomes more desperate and confused, the heavy beat of the music, the screaming of the singer, becomes almost hypnotic, drawing her down deeper into an unknown darkness.

At a mere six minutes, First Bite is a satisfying bite of horror. Short, compact, and giving a simple, contained premise and location allows the audience to jump straight into the action and the horrifying conclusion.

I thoroughly enjoyed it for the soundtrack as much as the plot, acting, and everything else, watching it several times in a row. It shows you how effective horror can be. For me, heavy metal and horror go hand in hand and, as a huge fan of both, First Bite only makes me crave a second, third, and fourth.

You can watch First Bite now on Vimeo.