The eighties are back (again)! It seems that no matter how many films we get which are set in the not-so-distant past, it is apparently not enough! I reckon most horror aficionados love a good film inspired by this era, and as a result it’s great to have so many films that relive this vibe, but somehow Sleep Tight has a different edge. 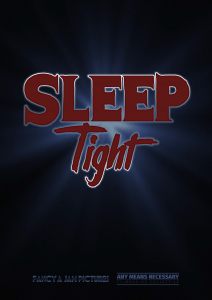 Lewis Taylor, the film’s director, believes that the majority of all remakes and homages are missing something. Or rather, they have something the older films don’t have – CGI, drones, and 4k resolution.

Not, Sleep Tight, though. This short tries to recreate that eighties feeling without all the fancy stuff – the make-up is real and the effects are all camera-captured. What you see is absolutely what you get.

The film’s logline is “it’s not the bed bugs who bite”, but I would perhaps change it to “what’s scarier than monsters? A lack of boundaries”. You see, while Sleep Tight is a fun film, it is also very sensitive…

The eight-minute story focuses on the relationship between Josh (Joseph Richard Thomas), a teenager who is confined to a wheelchair and struggles for autonomy, and his father, Frank (played by Mark Field), who is verging on a mid-life crisis.

Josh’s everyday struggles may seem simple to most of us, but for him, even going to bed is a chance to prove his independence. His dad, however, doesn’t fully support him – he’s on the fence between being a dad and being a friend whose banter is on the brink of insulting.

Contrasting with his determination to show he is growing up, Josh asks his father to leave the light on, which, if you have ever partaken in a horror film marathon, you might understand where Josh is coming from. But for Frank, this is just proof that his son is still a child. Frank turns off the light and the horror begins…

The cinematography in this film is superb. Utilising only one location and a confined space, it manages to create a sense of claustrophobia which maximises the tension. Of course, the fear Josh feels is exacerbated due to the fact that he is unable to leave his bed – leaving him completely confined in his corner.

The higher camera angles show just how small Josh is, how trapped he actually feels, and the lower portray how big and menacing the monster is. Sleep Tight is brilliantly directed and shot, with each frame maximising its own specific emotion. Be it suspense, fear, or humour – no shot is gratuitous.

Having said that, I think it’s actually all areas of this film that are on point. The monster’s make-up gives the vibe of a mix between Samara from Ring, Regan from The Exorcist and Jackal from 13 Ghosts. The sound design is just as important and the tension is built up and brought down by this as much as it is by the cinematography.

Overall, Sleep Tight is great fun – it is well made and it shows it was made with love by true horror fans. Every small detail of the film pays homage to another, and without a doubt these ‘Easter eggs’ are enough to fill endless baskets.

Sleep Tight can be seen at the upcoming London Independent Film Festival, on Friday 20th March 2020, in Shorts Block 7.