As I have mentioned before, Stephen King’s film and TV adaptations (unlike the source material) run the gambit of being either excellent, award-worthy productions, or as is quite often the case, complete trash. 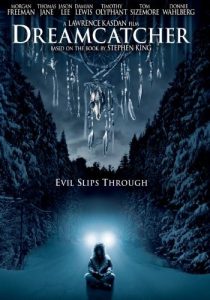 This film contains four life-long friends, arse monsters, supernatural elements and probably the craziest Morgan Freeman performance you will ever see. It is, of course, so bad, it’s good. This, ladies and gentlemen, is Dreamcatcher.

As I mentioned above, Dreamcatcher follows four friends, Henry (Thomas Jane), Beaver (Jason Lee), Jonesy (Damian Lewis) and Pete (Timothy Olyphant), who are on the way to their annual hunting trip at a cabin in the woods.

However, their pleasant trip goes askew with an onslaught of a blizzard and… aliens. But our heroes are far from ordinary, as they all have special abilities, given to them as children by a mentally-challenged pal Duddits (Donnie Wahlberg), as a reward for saving him from bullies.

Although for many of the group, these extra-sensory gifts become more of a curse than a blessing. For example Henry, a depressive psychiatrist, can read his patient’s minds, which often leads to them telling him more about themselves then they want to divulge.

Pete can find lost things, which tends to freak people out. Jonesy has a vast “memory warehouse”, where everything is categorised into mental boxes and filing cabinets – to the point where he must burn old memories to make space for new ones (this becomes important as the film goes on). Beaver’s gift is perhaps the vaguest, and appears to be some sort of precognitive ability.

To me, it feels like these are the children from Stand By Me, all grown up with some supernatural elements thrown in for good measure. But they must all come together to stop the maniacal military man Colonel Abraham Curtis (Morgan Freeman) nuking the town. But that comes later.

Jonesy and Beaver find a sick man in the woods and take him into their cabin. Then an omen seems to appear as herds of forest animals run past in what appears to be a state of panic.

Unfortunately, we soon discover that the patient is in fact infected by “shit weasels” (the film’s term not mine): a parasitic worm that grows about four feet in length and bursts from people anuses. So it begins.

Elsewhere, Jonesy tries to escape, but is stopped in his tracks by a gigantic alien that possesses him, leaving Jonesy’s real persona trapped in his aforementioned “memory warehouse”. The alien becomes “Mr Gray” and speaks with an upper-class English accent — this allows us to distinguish who is who in the dialogue between the alien and Jonesy.

It’s here we learn that Mr Gray wants to get to a New England aqueduct to taint the water supply with an alien virus. We are now introduced to Col. Curtis, whose job is to keep this alien invasion under wraps.

Curtis is a burnt-out, genocidal veteran of anti-alien warfare, who delivers his plans in such a soothing way (standard Freeman) that he appears almost sage-like. Freeman’s acting here is the epitome of the film. His motivation seems paper-thin, the speeches are scripted terribly, and even his outfit doesn’t work.

But he gives a brilliant performance, which makes his comradely and aristocratic persona seem underhanded. The fact that he and all of his fellow actors takes the flawed material so earnestly, really adds to the overall strange feel of the film.

So by now we have lost both Beaver and Pete to the “shit weasels”, Jonesy is battling Mr Gray is his mind, but Henry has so far managed to survive, and is rounded up with others in the area into a military-style quarantine zone.

It is here that he learns that Col. Curtis intends to kill everyone that has had exposure to the aliens. Henry quickly convinces a Captain Underhill to mutiny against Col. Curtis’ plan.

Cutting back to Jonesy, he has concluded that Mr Gray is searching for information relating to their old pal Duddits. On this realisation, Jonesy “calls” Henry through his mind, which Henry picks up through Underhill’s gun, instructing him to go to Duddits.

Once Henry and Underhill reach him, it seems that he is dying from Leukaemia. Together, they meet up with Mr Gray at the targeted aqueduct. Henry convinces Mr Gray to leave Jonesy’s body, which leads Duddits to reveal the fact that he is also an alien. During the resulting fight, Mr Gray pierces Duddits’ chest, which causes both them to explode and die. Jonesy and Henry kill the remaining “baby shit weasel” and save the day. 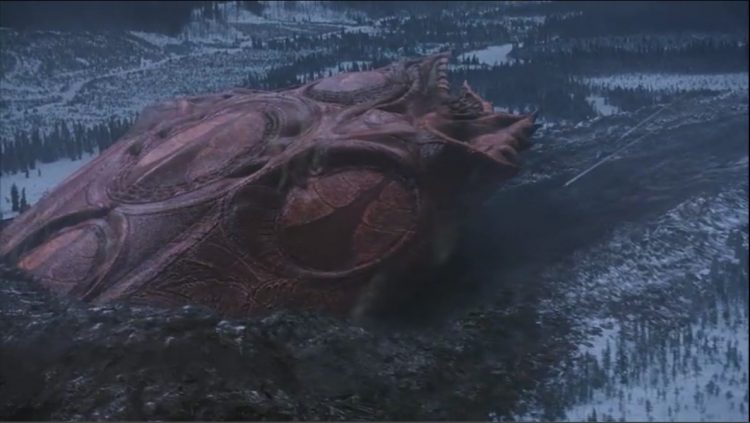 One of the main issues I have with Dreamcatcher is the constant exposition dumps that this film delivers us. I guess this is a common issue when translating a book with hundreds of pages into a 2hr film — there’s always the temptation to spell the finer details out unnecessarily, rather than build them into the visuals.

What makes this film “so bad, it’s good” for me is the acting talent that is attached to this film. The writers, directors, actors and cinematographers bring so much of their expertise to the production that the strangest scene of Damian Lewis talking to Mr Gray managed to rattle me a little.

There is also perhaps simply too much going on in Dreamcatcher, from the psychic phenomena, flesh-eating monsters, alien invasion, body snatching and government cover-up. It is absurdly plump and incongruous, and as a result lacks real focus.

But it is full of obscenities, sexual innuendo, blood and gore. And depending on how you feel about these tropes will strongly influence how you think about the film. For me, it all adds to my enjoyment of the film.

Dreamcatcher is a film that you will either store away in your pleasant “memory warehouse” forever, or burn it into the ether.