Frankenstein’s Monster has been used as a base for several films since Mary Shelley created the creature in 1818. But I imagine even Shelley herself never envisaged her legendary character ending up in a film featuring exploding prostitutes. This is  Frankenhooker. 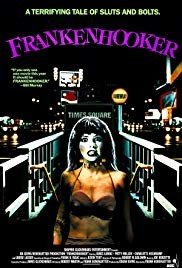 Frankenhooker is not your normal type of horror film, and that is to its credit. In the opening scene, you can not help but notice the nods to 1985’s Re-Animator — I mean, the main character is even called Jeffery (James Lorinz).

It starts by showing medical student Jeffery Franken experimenting on a brain with an embedded eye, while his family around him are having a barbeque. However this idyllic day ends with the love of Jeffery’s life Elizabeth (Patty Mullen), being cut down by a robotic lawnmower.

We don’t get to learn much about Elizabeth, except that her love of pretzels go “straight to her hips” — her mother has often badgered her about not having “a perfect body”. While it is throw away comment, it develops more weight (sorry) as the film goes on.

While Jeffery is mourning, his mother (Louise Lasser), tries her best to get him out of his deep depression with promises of sandwiches, but nothing seems to help mend his broken heart. But ping! Here is the lightbulb moment. He may not be able to piece his heart back together… but he could try it with Elizabeth’s.

Jeffery can complete his re-building of his former love because he has all the technology (thanks to his medical studies) in his back garden. But where could he find a stream of ‘spare parts’ as it were?  Well… I think you can probably see where this is going.  After all, the clue is in the name, right?

So he creates a drug called “super crack” to do the killing for him. This makes things very easy to administer, because all sex workers are already addicted to drugs! Sigh. 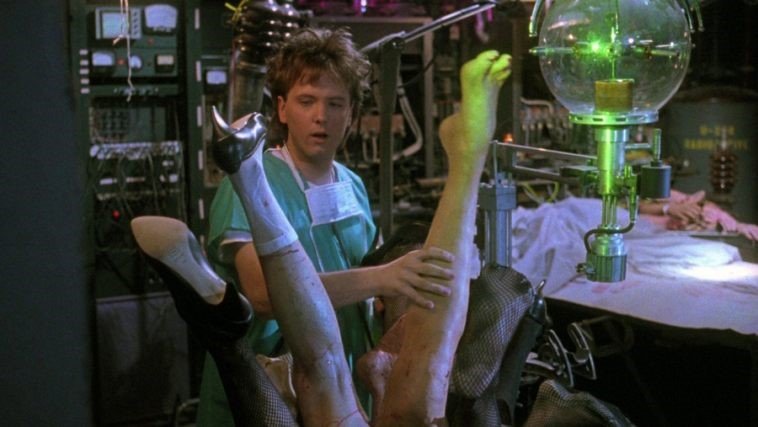 After the ‘explosive’ outcome of the “super crack”, Jeffery collects the body parts, and very kindly apologises to each of them. He also promises to put them all back together after he has completed Elizabeth.

The issues for Jeffery start to arise from the fact that the memories and personalities of the ‘donors’ now affect the new Elizabeth, signified by her new catchphrase: “Wanna Date?”.

This is where Frankenhooker‘s underlying theme of ‘double standards’ really start to shine through. It was fine for Jeffery to use a prostitute’s body for his needs, but it is absolutely not okay for Elizabeth to use her new body in the same way that the prostitutes did.

Eventually, Elizabeth’s original personality returns, and she challenges Jeffery over what he has done to her body, to which he explains that he “had to make do with what he had”.

And it’s here that it all starts to go wrong for Jeffery. Our pimp Zorro returns and lops off his head with a machete, in an act of revenge for killing his ‘girls’, and tries to steal Elizabeth.

She’s saved by a marauding bunch of spare reanimated limbs that never made the ‘cut’ as it were, and once safe, she turns her attention to rebuilding her now headless beau in the same way that he did to her. The twist, however, is that the re-animating serum is oestrogen-based, meaning that Jeffery has to be reanimated with a woman’s body.

As a result, Jeffery is, of course, missing his member. Again we are faced with the double standards that it was fine to use other people’s bodies to re-build Elizabeth, but not to re-build himself. We have a nearly identical scene with Jeffery discovering his new body as Elizabeth had when she found her new one.

I believe Frankenhooker is about female beauty standards, and the hypocrisy of men when the same rules are applied to them. Director Frank Henenlotter’s ideas soon outstrip the budget, but we still revel in the crazed tale put in front of us with the dark humour punching you in the face.

James Lorinz, who has an unbelievably wide range of ‘fierce stares’, and his New Jersey burr is apparent and monotone through the whole film — no matter how bizarre the situation is.

His deadpan delivery is for me why the humour lands. Jeffery explains how he uses a power drill into his brain to suppress the moral shame, and as he demonstrates this, you can not help but slither under his gaze. 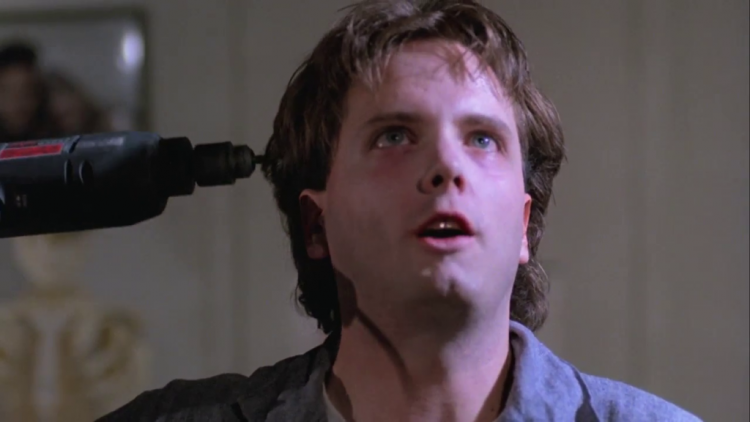 The film is brainless, unintelligent, and devoid of class. I mean come on, it’s called Frankenhooker… what did you expect?  But Henenlotter leads you through the story like a cat that got the cream. You can tell he’s in his element, and that’s weirdly infectious.

This is a loud, bizarre and mindless car crash that you can’t help but rubberneck while rolling your eyes. It doesn’t give you a break either, with every scene getting more and more deranged and funny.

But at heart, it asks the age-old question about what happens when misogyny dictates our perception of “beauty”. And as I mentioned earlier, Elizabeth’s revenge at the end is a fitting answer.