What do you do with Stephen King? He keeps popping up when it comes to the “so bad, they’re good” films. 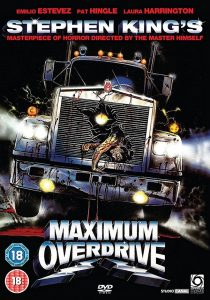 If nothing else, it shows how difficult it is to adapt Stephen King’s words into a film. But, hey, what could go wrong with a film when Stephen King himself directs it?

As the man said, “I just wanted someone to do Stephen King right”.

It has green goblin faced trucks, Lisa Simpson’s voice, AC/DC soundtrack, and was made with snowdrifts worth of coke. It is Maximum Overdrive.

The premise of the film is that Earth has passed through the tail of a comet, which (might) have caused machines to turn into homicidal maniacs. Their primary targets are their suppressor, the humans.

The film is then stationed at Dixie Boy Truck Stop, and the cast of characters are filled with Stephen King tropes.

We have the hardened South Baptist bible basher, Camp Loman (Christopher Murney) and the ex-con hero with a dark past, Bill (Emilio Estevez).

The only missing cliché is the alcoholic writer – unless you are counting Stephen King’s cameo.

The mismatched survivors are forced band together to work out how to defeat the killer trucks that are holding them hostage.

As mentioned, this happy junker film was Stephen King’s directorial debut, and every critic and their mum tore this movie apart. This, unfortunately(?), meant Stephen King would never direct again.

The thing is, Maximum Overdrive just might have been the film that Stephen King was trying to make. We know, from reading his fictional work ‘Danse Macabre’, that Stephen King is obsessed with the 50s. He is the person that would love films like Plan 9 from Outer Space and Robot Monster (both of which I will give the “so bad, they’re good” treatment). And that is exactly what he gives us.

So back to the truck stop and the last survivors of civilisation.

Yes, the pacing is off and the dialogue is painful. I could have done without the forced romance between Bill and Brett. None of the survivors have fleshed out personalities. A high percentage of the survivors ended up being nothing more than expendable truckers.

Even Bill, as the hero, has little to say or do. He drags in one screaming waitress after she goes outside to confront the trucks, and that is as action-driven as he gets. Bill’s big plan is filling the trucks with gas.

The true hero is the young lad who puts the escape plan together.  Although, to be fair to Bill, he does fire a rocket launcher which allows the survivors to escape to the docks.

Maximum Overdrive’s plot is full of conflicting events, some of which are huge flashing red lights. For one, Hendershot just happens to have a small arsenal concealed in the basement. This is a plot convenience rather than a part of Hendershot’s character. It is the fact that the weapons don’t come to life that is the real problem.

The inconsistencies get even more frustrating as one of the vehicles that trap them at the truck stop is military, complete with a machine gun which randomly fires.

Maybe the weapons only come to life if attached to a vehicle. Harder to gloss over is the two newlyweds who are chased by a truck on the highway in their completely unaffected car.

Maximum Overdrive is an uneven film in the sense that it never gives us unexpected jolts of horror. The horror is so comical, it’s delightful.

The circling trucks are meant to be horrifying, but anyone that drives motorways knows this is a standard scene. The trucks could bring the film to a screeching halt by driving through the truck stop itself. I mean, they get there eventually, but only after it has been abandoned.

I suppose it is not intended for me to be on the side of the trucks, but they do have more personality than most of the survivors. Hendershot is entertaining, but I struggle to understand his dialogue. Bill and Brett’s conversation is supposed to be romantic, but it is tortured. Either way, it works because they end up having sex.

It has some excellent ideas, corny dialogue, explosions and some gory moments when humans attempt to take on the trucks and lose.

The blood flows freely and the film is littered with dead bodies, the most disturbing being a dog with a toy car in its mouth. Like most “so bad, they’re good” films, this is not an intellectual piece. But what do you expect? It is about killer trucks.

Overall Maximum Overdrive is a camp classic that needs to be shared with a big group of friends.