Rubber is the classic tale of tyre achieving consciousness. Then meeting a beautiful girl 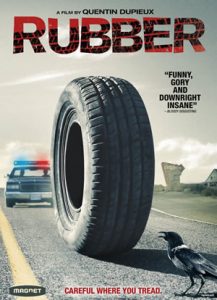 who doesn’t even notice him. Rejected, he then goes on a murderous rampage, all under the watchful eye of the audience.

A tale as old as time. Right?

Ok, I understand the plot is crazy, and I haven’t even covered half the chaos that is Rubber.

You think that a storyline this bizarre has to be incorrect. But hang with me, and I will explain why you’re wrong.

From the beautiful opening scene, you know you’re watching something unique.

A car barrels down the road, driving over several chairs, as if someone has murderous intent for a particular brand of flat-packed furniture.

When the vehicle stops, a policeman climbs out of the boot to deliver a speech to the audience; about how film mirrors life as things happen for no reason.

As the car pulls away we realise that the address isn’t directed at us, but to an actual audience who are given binoculars to “watch the film”.

Then they’re watching a tyre come to life. Wobbling about like Bambi.

Eventually, the tyre comes across an obstacle, a beer bottle and, for no reason, the tyre explodes it with the power of its… mind ?

This leads to an exploding tarantula, a crow and a man’s head.

And this is the downside.

We see lots of exploding heads for the rest of the film. It would’ve been nice to see some variety. An exploding arm or leg would be just as visually stunning. 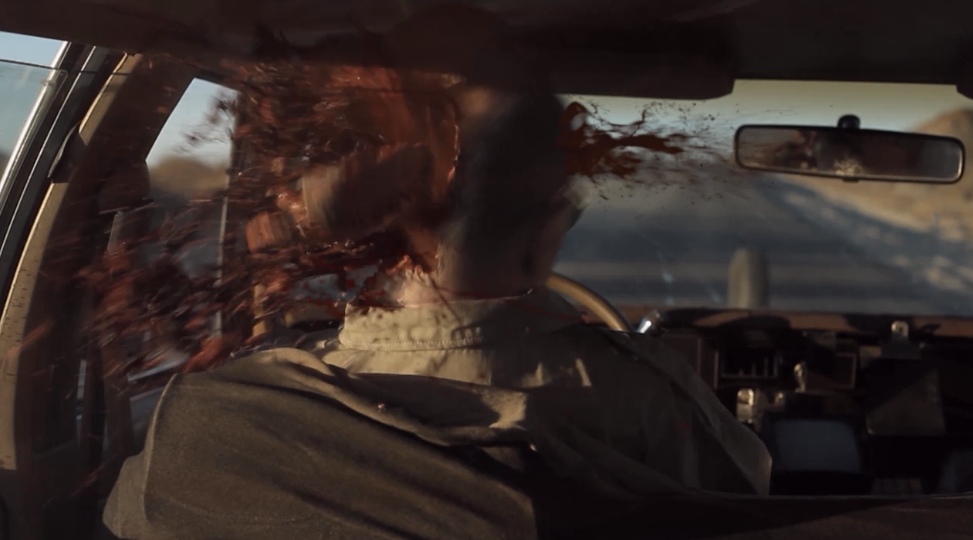 The special effects are better than they deserve to be. Each moment of tyre-rage is interspersed with shots of the landscape in meditative silences.

And in these pauses, the audience, both us and them, are given time to contemplate the meaning behind what we’re seeing or to turn to the person next to us and say “WTF?”

The audience in Rubber, like life, is mirroring the audience that is watching the film.

Genderising and anthropomorphising the tyre, shushing that person that insists on a running commentary, and someone insisting on silence.

The problem the audience in the film has is that they are so preoccupied with getting the best out of the situation that they fail to notice the lack of a barrier between their world and the film world. This is to their cost.

This film has no reason; a significant get out clause for director, Quentin Dupieux to not explain anything.

Robert, (the tyre’s name in the credits only), has no reason to become sentient and become a killing machine suddenly.

So the tyre has a name, and we are shown a flashback.

Robert is a character capable of making decisions, so memories seem like the natural next step, but we still need to use imagination to make our conclusions as to why Robert is doing what he is doing.

Why does a tyre kill?

It could be that the tyre represents the dying trade that America was a once strong industry in. Cars.

It was something that’s become a blight on the landscape, but it’s refusing to die and wants to keep rolling on.

Or Rubber has no reason. 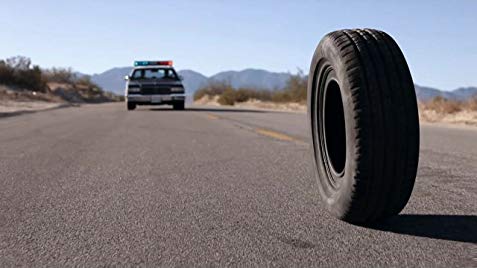 As a villain, Robert has a bloodlust that cannot be sated. The camera angle is sometimes so focused on the tyre that you can see it breathe.

The overall styling of the film is wonderfully shot in its simplicity.

Once it reaches the Motel, things become weird.

The audience in the film are once again our voice. They ask “Should the tyre not float?” when it sinks to the bottom of the pool, while another bemoans that “This scene makes no sense at all.”

The third act of Rubber enters weirder territory as the policeman from the opening explains that it’s all an act and everyone present can now go home.

The audience is no longer there. Therefore, the film no longer exists.

An excellent philosophical question wrapped up in absurdist packaging. Of course, it turns out the policeman is wrong about the audience being gone. So, the film continues.

Is Rubber a horror film?

It relies on absurdity to be shocking, not too far removed from what Sam Raimi does, especially in Drag me to Hell, which was released two years previously.

But what Rubber does is comment on the concept of taking a single idea and stretching it to breaking point. To make a feature-length film, much like David Sandberg’s Lights Out.

Rubber is a film that needs to be shared with a big group of mates so you can all laugh at the absurdity.

Otherwise, the film could feel like a drag around about an hour in.

Like I mentioned, the repetitive nature of the kills become predictable. But it’s worth sticking around until the end for the climactic ending.

There is also one of the best last lines since The Lost Boys: “One thing about living in Santa Carla I never could stomach, all the damn vampires.”

Rubber shoots for the moon with its ambition but never quite gets there. But it’s in the stars.

Rubber has to be watched to be believed, and it’s thoroughly entertaining.

It can never be accused of being a tiresome film.