So Bad, They’re Good: The Return of the Living Dead 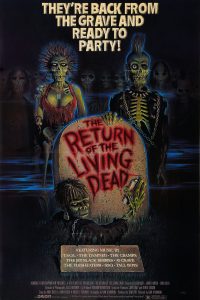 Rave around the graves, naked Linnea Quigley, the first time zombies want your brains, telling you its inspiration of right there in the title, and the Tarman… it could only be The Return of the Living Dead.

Once again, Dan O’Bannon has taken a genre and put his twist on it, and in this case it has bits of brains splattered all over the place. The Return of the Living Dead, with its mixture of satirised comedy and vulgar horror, was ripe to become a cult classic, giving the film a solid appeal to both horror and zombie fans. It also contains all the things that seemed to earmark it as a mid 80s horror film; punks, zombies speaking, over the top laughs and sticky special effects – obviously aimed at a specific audience.

O’Bannon merges heavy metal with nakedness and violence, with black humour from 1980s horror films being the cherry on the cupcake. O’Bannon had some new ideas about zombies, which did not catch on at the time but would become more of the norm decades later. George A Romero had given us the ‘rules’ when it came to zombies. The undead shuffle towards the camera in their endless desire for flesh (but maybe not brains), the protagonists try to defeat the monster and escape the nightmare, but their stupidity leads them to become a zombie themselves.

O’Bannon took those rules and threw them out of the window with careless abandonment. As a result, the zombies in The Return of the Living Dead run, leap, and have a better fitness levels than I do. By doing this, the film has added to the mythos of zombies. For example, there is a description by one of the imprisoned undead who explains that eating brains takes away the pain, which gives a reason for their specific meal choices. Another rule broken from Romero is that the zombies can not be killed with a simple headshot, making them exciting, introspective and startling. 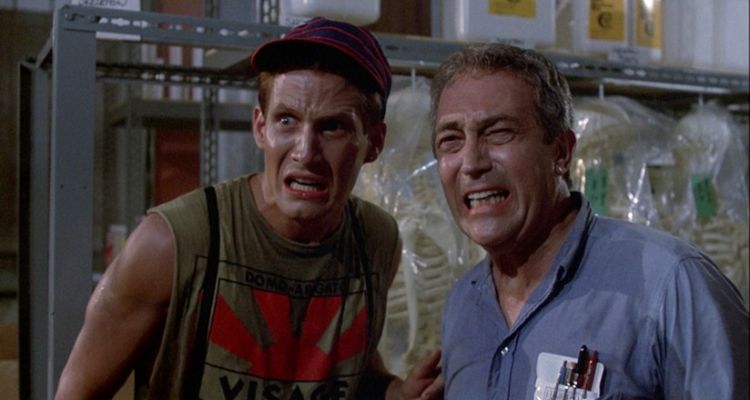 The original idea for The Return of the Living Dead came from John Russo with Tobe Hooper to be in the director’s chair. However, it was delayed due to legal issues with Romero’s lawyers over the words “Living Dead”. Once this had been settled, Hooper had left, and O’Bannon was now in place to bring us an utterly distinct film.

According to Frank (James Karen), the film explains that the original Night of the Living Dead was based on a real-life zombie attack. He relays this to his employee Freddy (Thom Matthews) in a medical supply warehouse. He explains that George A Romero had been told that he could do it as long as he changes some of the details, so no details of the source are mentioned in Night of the Living Dead. But before you know it, Frank and Freddy get infected by some harmful gas from government oil drums, and the gas reanimates everything in the warehouse. Frank calls Burt (Clu Gulager), the warehouse manager, for help, but none of the men decide to call the emergency number on the oil drums. Instead, they decide the best idea is to burn the zombie corpses, which releases more gas into the air, turning into rain. 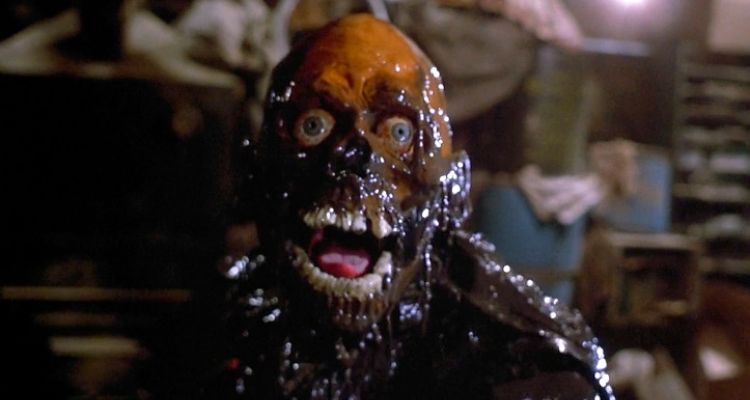 One of the best parts of The Return of the Living Dead is how it depicts humans becoming the monsters. The young apprentice and his boss are overrun by ghouls and the virus has infected the whole laboratory. Changing into a ghoul starts with a head cold and they go on to suffer from sharp muscular pain and shivers. At this point, one of their friends calls for paramedics. Unfortunately, they soon establish that these two are technically dead, and their body is going through Rigour Mortis. This does not go down well with the two involved.

The film has very few points that don’t hit the mark and the grisly special effects is definitely the film’s star. The laboratory has some exciting collections, including ‘split dogs’, cross-sections of dead dogs preserved like a Damian Hurst artwork. 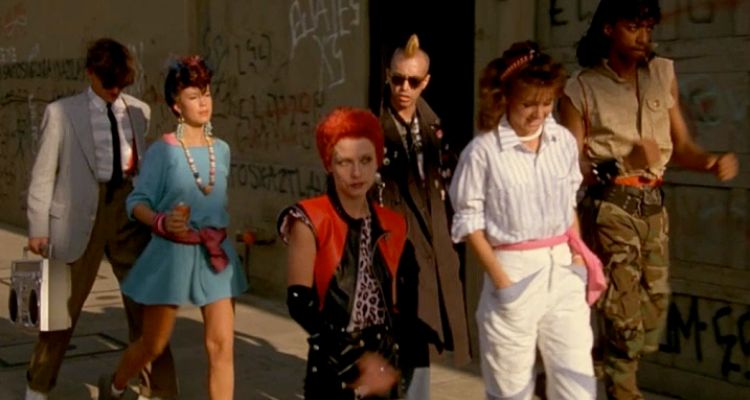 The infected rain comes into play later, when we follow some punks at a cemetery whose sole purpose is to be zombie fodder. The rainwater trickles down to the graveyard, which causes the dead to be reanimated, with skeletal bodies bursting out of the ground to a heavy metal note. It is not the best moment of the film and could have been handled better.

What many people remember from the film is Linnea Quigley as punk, Trash. Trash is infatuated with death and sadomasochism as she sexily strokes her thigh and explains that she is anxious about being engulfed by an old man (Foreshadowing much?). This gets her in a state that she starts to strip, which is followed by the line: “Somebody get some light over here Trash is taking off her clothes again.” And Trash never gets dressed again after leaving her clothes behind as the zombies’ attack, leading to a lot of full-frontal nudity.

There is often a sexual element to 80s horror, but this does feel awkward watching it now. However, Quigley talks about her roles in In Search of Darkness 2, Shudder’s 80s documentary on 80s horror films, and for her, the most annoying part of this film was the amount of time in make-up. 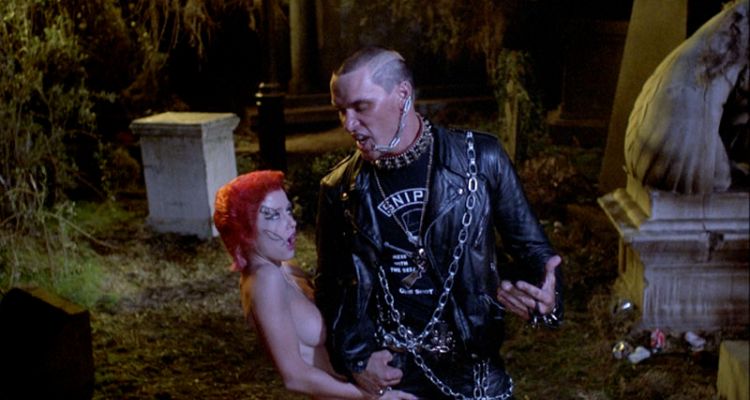 So is this a good film? It is undoubtedly the high end of ‘so bad, they’re good‘ films, many may not even consider it bad. The film does not let up when it comes to entertainment value, with gory moments and humour. The acting is on the campy side with Karen and Matthew flicking from annoying to amusing as they slowly transform into zombies. You will run the gamut of emotions from shock, irritation, laughter and dread. Sadly, we did not get more films like this from O’Bannon.

You just need a whole group of horror and/or zombie fans, a great sense of humour and no desire for a deep plot, then you would definitely enjoy The Return of the Living Dead.

The Return of the Living Dead is streaming now on Amazon Prime with a MGM subscription.