The Strange Airbrushing Of Stranger Things

Apologies people, but the 1980’s were a bit shit. There – I said it. For those of you reveling in Stranger Things nostalgia, I’m sorry, but you’ve been sold an airbrushed version of the era.

For anybody who lived through the seventies with its doomed two-fingers to the system, the music, culture and fashion, the eighties were seen as a time of capitulation from this ideal. The raw energy of punk blew through the halls of disco leaving distraction in its wake, and a confused aftermath of post-punk and synth pop.

The eighties was when mass consumerism thrived. The electronics boom was upon us, but in the UK, radio licensing laws forbade the use of walkie-talkies within any range and CB radios were outlawed too. 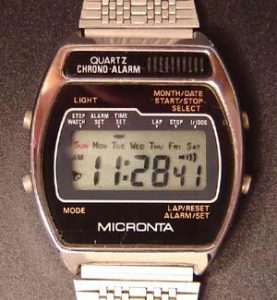 Anybody who ever went into RadioShack (lionised in Stranger Things by the heroic Bob character), can tell you that it too was a bit crap…  Micronta Quartz anyone?

That was the digital watch my parents bought for me for my birthday and it was overpriced mediocrity.

Here in the UK we had a successor to RadioShack, and it was called Amstrad. The less said about their products the better.

Now I get to the fashion and haircuts!

Perhaps a small town in the US would be immune from stone-washed jeans, feather-cut and crimped hair, cut off finger gloves and too much eyeliner, but small towns in the UK were not. I know, I grew up in one.

I am of course referring to the mullet.  And this abomination didn’t feature in Stranger Things. Not really anyway. Even Billy’s haircut did not show it in it’s true hideous glory.

I would imagine that every small town cop in America would be gorging on Magnum PI and Miami Vice and would be wearing a tonsorial tribute.  The police force in this show is far too millennial to be true to the decade.

OK rant over.  Stranger Things was great fun, but but unless you lived through the eighties and are old enough to remember it you can’t help but see the white-washing of the decade that taste forgot.

For every Clash Combat Rock, think of ten Howard Jones!