Come And Support Us At ‘What’s The Bloody Question’!

It’s been a while since it’s last outing, but the kitschest horror panel quiz show in town is back, and hitting The London Horror Festival… Take your seats for What’s The Bloody Question! 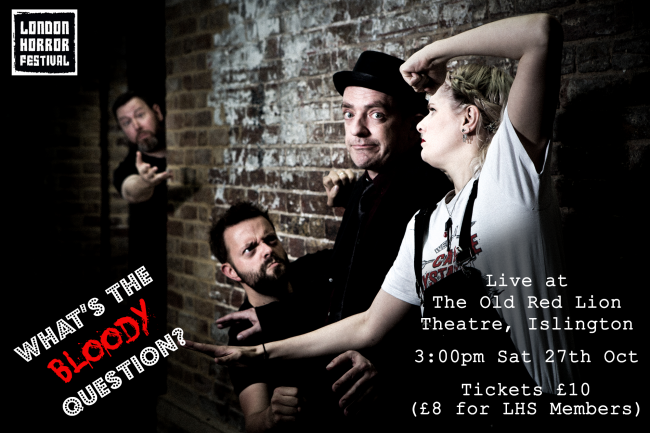 For those of you late to the party, here’s the run down…

Two teams pit their horror wits against each other in a battle of knowledge, skill, creativity and… well, probably play-doh actually.

Will the mysterious Questionomicon continue to vex our valiant competitors? Will presenter Tony Sands be able to harness the sheer power of the Dice Of Doom? Will The Score Keeper, Damon Rickard have enough fingers to calculate the points?

All will be decided on the day of reckoning. Or as it’s sometimes known to mere mortals… Saturday, 27th October at 3:00pm.

Now, I’m sure you’ll be pleased to know that team London Horror Society is currently leading the head to head battle. But that doesn’t mean we’re being complacent.  We want as many home fans as possible! To make this happen,  LHS members like you can now get £2 off every ticket, using the code BLOODY.

Really hope to see you there!