How To Survive a Horror Film 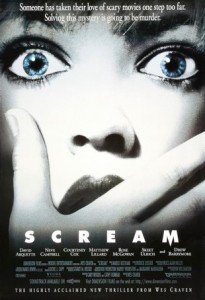 I’ve always been a fan of Horror, and one of the most famous Horror films (well to me anyway), is the Scream franchise. A little known fact was Wes Craven originally had the intention of calling the film ‘Scary Movie’ due to the serial killer copying other horror films; Hence ‘The Wayans Brothers’ with their parody Scary Movie).

I also remember watching the first of the series a while back, and thinking that one of the reasons I liked Scream so much, was because the characters knew they were in a horror film, which added a bit of humour. This is something a good chunk of horror films lack (a bit of a shame really, as to me, it adds a bit of extra depth to the film).

My favourite character had always been Randy, played by Jaime Kennedy. Mostly because he’s a nerd like me, but he always gave the rest of the cast inside information on how to “survive” a horror film.

Which got me thinking; in everyday life, how would we know if we were in a horror film, or about to walk into one? After all, life is full of little surprises and you never know what’s around the corner (Apart from numerous clichés).  Basically, my imagination has decided to run wild (as usual) and prepare you, the reader, with a few tips on how to survive that horror film you unknowingly are about to step into.

Now usually, horror films involve a group of people, however big or small. Monsters in horror tend to take people out one by one. So you must always stick together — unless you’re Arnold Schwarzenegger or Rambo.  I don’t want any of this “I’ll Be Back” and going in all guns blazing trying to be the Hero. Just face it, you’re not Clint Eastwood.

Talking about guns, they are a waste of time. If you notice in all films like Scream, Halloween and other slashers like A Nightmare on Elm Street, there’s always a sequel. So the villain cannot die from simple bullet wounds, regardless if that’s a shotgun or rocket launcher. Zombie films are an exception, but let’s face it, who actually uses guns against monsters that walk two miles per hour. Which ironically, I never understood in The Walking Dead, why Daryl turns up on a noisy Harley Davidson and begins using a crossbow to be SILENT? The zombies are going to know where he is from a mile off, regardless of what weapon he has.

Thirdly, if you do happen to find yourself alone in a house at night, shut all your doors, windows and curtains. That way if you do hear a creak, you know someone is in your house, so get that machete at the ready. And also, if there is an intruder, please do not shout “Is anyone there?” If there is, you’re unlikely to get a reply.  “Oh yes it’s me, the serial killer. I’ve just got back from the shops, fancy a cuppa?”

Finally, technology.  It will always let you down. When finding yourself in a sticky situation, your mobile phone will have no signal. That goes with all landlines as well. No phone will ever work, one way or another. And that goes with other electronic devices. If you find yourself investigating a Blair Witch, have some form of Paranormal Activity, or simply filming a sabotage of The Gallows, please do not film it on your camcorder. Be honest with yourself, what idiot would film themselves being chased by a monster instead of doing a runner? Just prepare yourself for a fight as running won’t help either. In all horror films, the damsel in distress always trips over thin air, along with the monster that seems to walk faster than you can run.

That’s it for now. A few tips to get you on your way to staying alive. Remember, no guns; no splitting up; no electronic equipment, and always check under your bed and in the closet, for you never know what’s lurking in the shadows. Sweet dreams.