Also known as High Tension (or Haute Tension), Switchblade Romance is a hidden gem of a horror movie and yet another from across the seas that I’ve come to write about. This time, French director, Alexandre Aja, also known for The Hills Have Eyes (2006) and Mirrors (2008), takes gore to a whole new level. 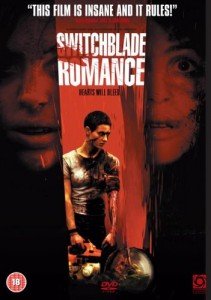 I remember watching this film about ten years ago and it being one that lingered in my nightmares. Not so much for its originality – because that’s one area it slacks – but because of the superb plot twist.

The movie starts like any other; two girls (Maria and Alex) go home for the weekend to Alex’s parent’s house. A short introduction and BAM there’s a killer on the loose and both parents are dead. My favourite scene is when the father is beheaded using a sideboard. Genius! I read that they actually cut several minutes of the film due to the copious amounts of gore Aja uses throughout (is there such things as too much gore?)

The killer is a creepy little guy who doesn’t show his face to the camera but leaves little to the imagination when it comes to death scenes. Beheadings, mutilating limbs, shootings and stabbings, this movie has it all.

We watch as the heroine, Marie, fights to save the life of her best friend Alex and for her own. Her actions are pretty realistic, she even manages to call the police at one point but frustratingly isn’t able to give them her location and for some strange reason they aren’t able to trace the call.

I don’t want to reveal the twist so I’m not going to discuss the plot anymore but if you like the gore of Hostel (2005), the creativity of Identity (2003) and the killings in Wrong Turn (2003), then give Switchblade Romance a shot. 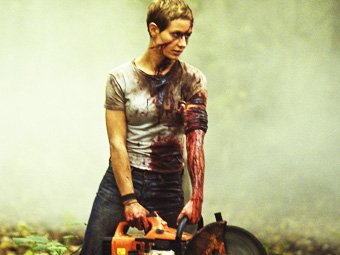 Writing this, I have just come to realise that the movie was released the same year as Identity which has a fair few similarities too. An odd realisation when the director has already been accused of plagiarism but for the similarities to a book.

To reacquaint myself with the plot and characters to write this review, I watched the movie again. Now, since my first introduction to Switchblade Romance all those years ago, I have read Dean Koontz’s, Intensity. WOW – I genuinely don’t know how there wasn’t a law suit filed. The first few scenes in particular treat the fictional novel as a screenplay!

Sitting watching the film I had to do some research and indeed many forums and reviews already link the two and claim that Switchblade Romance is indeed a plagiarised version of Koontz’s book.  Koontz himself allegedly said that the only reason he didn’t sue was that he didn’t want his writing to be associated with it.  Fair play to him.

Although Switchblade Romance is a lot of fun — and I certainly recommend watching it if you haven’t already done so — it may grate on you slightly if you have read Intensity as, in my opinion, Koontz’s writing and plot is exponentially better and you won’t be able to ignore the similarities. That being said, if you enjoy slasher movies with a twist and don’t mind some pretty gruesome gore scenes, then this could be the perfect hidden horror to add to your movie list.