The Creepiest Christmas Imagery in Horror

What safer image is there than Father Christmas coming to your house late at night, eating the cookies you’ve left for him, choosing whether you’ve been nice or naughty, and leaving a little present for you? That definitely sounds… creepy!

The horror genre has played with conventions and well-known images since the beginning of time. But there is something extremely eerie and deranged about using an image that is used around the world to convey happiness and safety to twist expectations and taint the spirit of Christmas. The red and thick outfit Father Christmas wears works as a camouflage for the smeared blood. The incessant Christmas carols hide the sound of screams. But what conveys more horror is the contrast of the bright, red hue gushed on the white snow: safety and idyll contaminated with horror and despair.

This image so terrifying yet comforting for horror fans during dark Decembers… So, here it goes: my top 5 creepiest Christmas imagery in horror films!

Directed by Michael Dougherty the 2015 Krampus, although based on the Austro-Bavarian folklore, tells a very real story of a dysfunctional family (played mainly by comedy actors such as Adam Scott, Toni Colette, and David Koechner) that causes a young boy, Max, to lose his festive spirit. Max’s rejection of the holiday cheer is reason enough for the ancient demonic spirit, Krampus, to punish the family. 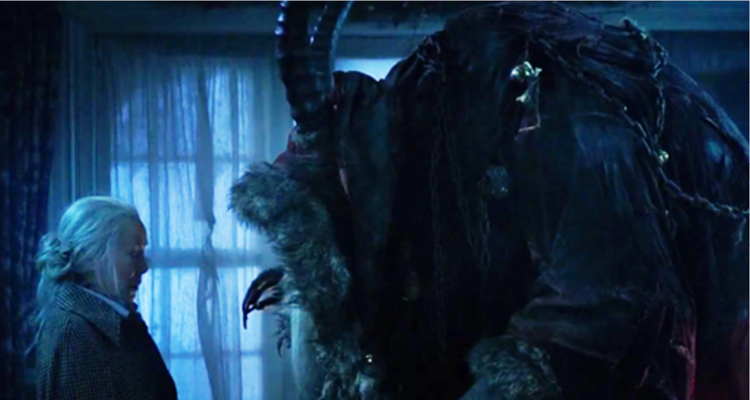 Krampus features on the fifth position of this list due to its bleak and cold depiction of Christmas decorations throughout, which is enough to maintain the viewer tense for the duration of the film; and for its portrayal of the monster. Coming out of the chimney, clearly alluding to the iconic way that Father Christmas comes into our houses, the film first shows Krampus’s horns and long fingers as the bright festive decorations give way to dark colours and smoke; hooves destroy a ceramic figurine of Father Christmas and a tall creature appears. Perhaps not the most frightening monster in horror films, but a good endeavour in the holiday/horror subgenre, especially with its monstrous, killing toys hidden in the presents the children receive.

The 2016 holiday horror directed by Zack Kahn was not on my radar until earlier this December when I watched it on Amazon. Better Watch Out plays with a lot of subgenres and expectations, especially as its protagonist is the dutiful, but not so innocent babysitter, Ashley, who takes care of Luke during Christmas Eve. 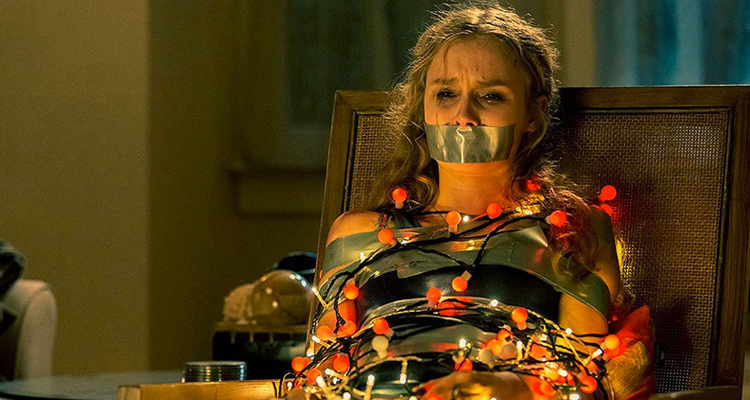 It is a mixture of Home Alone (1990) and When A Stranger Calls (1979) (hopefully that’s not giving too much away), but what sold the film to me is how fun it is. More importantly, though, what granted the film the fourth position on this list is the use of Christmas decorations, more precisely Christmas lights, to torture. Unlike Krampus, which makes use of bleak colours to dim the cheerfulness of the holidays, in Better Watch Out the colours always pop, creating the homey atmosphere into a killing ground.

Available to rent on Prime

In my opinion, Silent Night, Deadly Night is a great slasher! Charles E. Sellier Jr.’s 1984 horror follows Billy who, as a child, witnessed his parents getting killed by a deranged killer dressed as Santa during Christmas Eve, into adulthood as he copes with his trauma that resurfaces every year during the holidays. 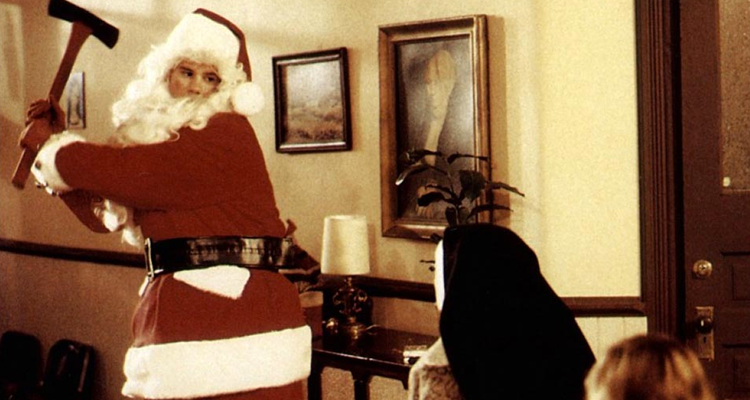 This film has all of the slasher elements of the 80s: unnecessary nudity, sex, a deranged maniac, and a child-turned-killer – all with a mix of religion. But what allows the film into this list is the depiction of Father Christmas, a homey and warm figure turned into a deranged killer. This is not to say that Silent Night, Deadly Night is the first film to depict a killer Father Christmas (as we saw in And All Through the House (1972), To All A Goodnight and Harry: Christmas Evil (both 1980). But what we see here are two generations of killers who dress as Santa Claus and who kill people who have been ‘naughty’ (at least in their own insane minds).

The decapitated body on a sleigh and a semi-naked woman hung on antlers are just extra flavours in this slasher!

Although not the best of all Black Christmas movies, the second instalment directed by Glen Morgan in 2006 is perhaps the goriest, and hence was granted the second position on this list. The original Black Christmas, directed by Bob Clark in 1974 (which has been reviewed by me a few years ago and which my fellow LHS writer chose as his top Christmas horror) holds such an importance in horror and in the slasher subgenre, as it introduces the extensive use of POV shots, a group of sorority girls who fight back, and the sexually disturbed killer. 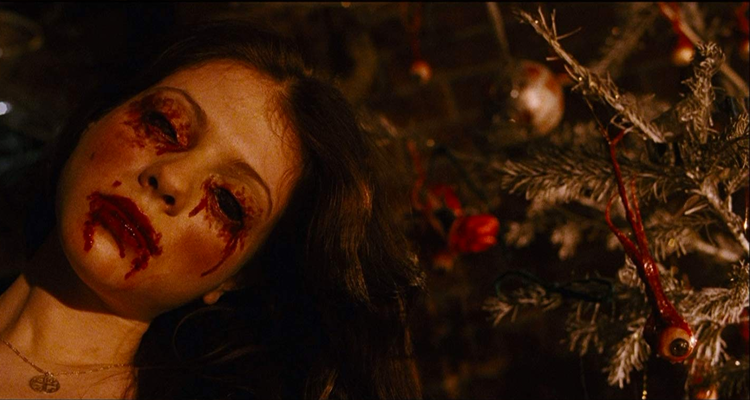 The film also makes perfect use of the Christmas holidays with carol singers, festive decorations, and fake holiday cheer. The 2019 loose remake, directed by Sophia Takal, offers a #metoo twist to the narrative (always keeping in mind how feminist the 1974 film is) as well as a supernatural element to it. The 2006 Black Christmas…does not do half of that. It brings together a group of teen actresses who were rising to fame – Mary Elizabeth Winstead, Michelle Trachtenberg and Lacey Chabert -, the noughties’s MTV aesthetics and its insistent need to create a backstory to the killer(s). Nevertheless, there is one specific reason why Black Christmas 2006 is on the second place here: its use of eyeballs as Christmas tree’s ornaments!

1 – The Nightmare Before Christmas

I am never sure whether The Nightmare Before Christmas is a Halloween or a Christmas film; nevertheless, I am giving it the first place on this list. The 1993 film directed by Henry Selick is creepy in many ways, but its twisted depiction of Christmas by characters who have ever only known Halloween is the stuff of nightmares (pun intended). 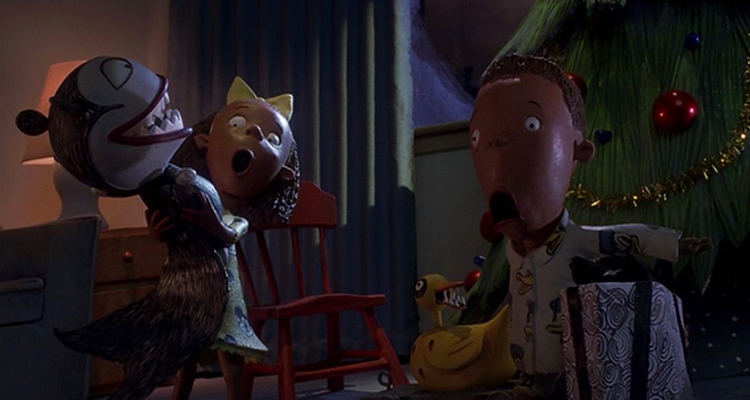 Jack Skellington, the Pumpkin King, feels a void in his life and goes on a quest to find something else that life has to offer, only to lose himself in the Christmas spirit. When he goes back to Halloween town to explain to everyone what Christmas is and to convince them to commemorate Christmas, everyone is surprisingly keen to take this other holiday on board.

The twist, though: how do people, who have only known scary things, understand Christmas if not taking everything the wrong way? The scene when the children are opening their presents only to find evil and scary creatures inside the boxes has haunted me since I was a child and for its creepy and spot-on portrayal of the holidays, The Nightmare Before Christmas holds the first place on my list of THE CREEPIEST CHRISTMAS IMAGERY IN HORROR FILMS!