The Evolution of Horror Launches New Partnership with Genesis Cinema

The Evolution of Horror podcast is creating a new season of film screenings in partnership with the Genesis Cinema in London, which will show horror classics paired with a ‘curated special feature’ such as an introduction, quiz or discussion panel, and an opportunity for the audience to mingle with like-minded horror fans.

‘Evolution of Horror Presents…’ launches on 26 April, and the first film to be screened will be Eraserhead (dir. David Lynch,1977). Tickets for the inaugural night are on sale now. 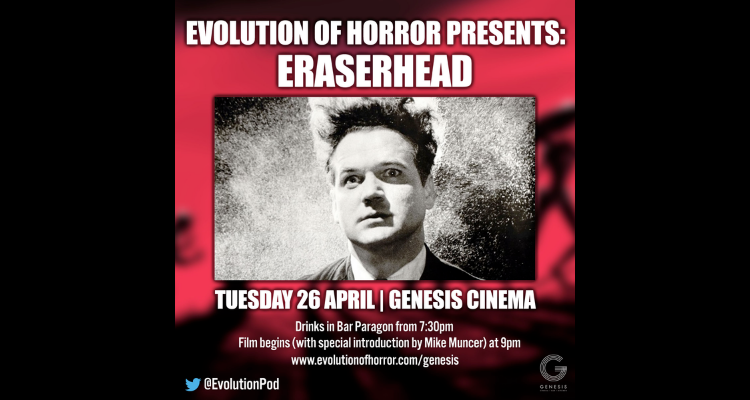 Mike Muncer, creator and host of The Evolution of Horror, said about his latest venture: “We couldn’t be happier to be working with the brilliant team at Genesis to present regular horror films on the big screen. “The Evolution of Horror” has hosted successful screenings before and audiences have been keen for more, so it’s exciting to be able to hold ongoing evenings where we’ll show a range of horror titles covering different subgenres, decades and directors.

“Eraserhead is the perfect film to kick things off. Anyone who listens to the podcast will know I’m obsessed with David Lynch, so his debut film seemed like an obvious choice, and we wanted something that would appeal to people who already love the Genesis as somewhere to watch cult cinema.”

Genesis Cinema said of the new partnership: “We are big horror fans and so we couldn’t be more thrilled to be starting this partnership with the amazing team at the Evolution of Horror podcast. Lynch seemed to be the perfect choice to kick things off with both ours and EOH’s audiences and we cannot wait for it!”

David Lynch’s 1977 debut feature, Eraserhead, is both a lasting cult sensation and a work of extraordinary craft and beauty. With its mesmerising black-and-white photography by Frederick Elmes and Herbert Cardwell, evocative sound design, and unforgettably enigmatic performance by Jack Nance, this visionary nocturnal odyssey continues to haunt American cinema like no other film.