My Top Future Horror Films Of 2016

You’ve all seen them. You’re sitting in the cinema, about to enjoy the latest and greatest scream feature only to have the previews for upcoming attractions race across the screen. It’s at this time I usually make sure I’ve silenced my phone and merely think of my place in the universe, but I’ve happily been served up fresh slices of horror for my never-ending appetite. Some of my top future horror films for the rest of 2016 are coming sooner rather than later, but you can’t blame me for being excited.

I have selected five for your perusal today.  Some are based on YouTube clips, while others are sequels. Others are inspired by previous films in the genre, while some just leap into the unknown and try to drag us along with them. I’m happy to say I approve of each of these movies so far, as they all seem to have quality directors, producers, and movie studios backing them. 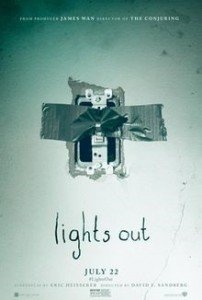 If you don’t know who James Wan is, he’s the man behind The Conjuring 1 and 2, Annabelle, Saw, and countless other classics that have spun wildly out of control. Any film he touches I will see without a second thought.

Now, Lights Out was originally a 2013 short film thought up by director David F. Sandberg, one you can see for free online right now. Well worth the watch. Wan, among others, noticed this film and offered to make it into a feature-length movie.

With Wan acting as a producer, this feature is based around an entity that only strikes in darkness. It haunts several people who are connected distantly through the past, and proves unpredictable and violent at the best of times. It often likes to torment victims by dragging out the haunting.

How it ends, who can say? The movie was made with an astonishingly low budget of five million dollars, so it should be a blockbuster on its own through the marketing that has been pumped out into previews and movie posters. July 22nd isn’t terribly far off for this thrilling horror tale, so I can survive on The Conjuring 2 for now. 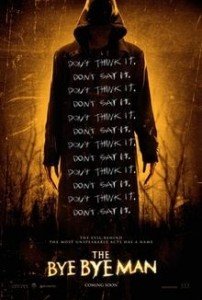 The Bye Bye Man is based on of the novel The Bridge to Body Island which was itself a great success.

Directed by Stacy Title, this college-based horror film revolves around three students who move into off-campus housing. They of course choose the old building that everyone avoids, probably because the rent is cheap, and begin experiencing supernatural events. They learn of spree killers that lived in this house, and how some claimed they were possessed by “The Bye Bye Man”.

The premise is fresh enough, but is directed by a veteran who hasn’t been involved behind the camera for over nine years. She’s responsible for Hood of Horror (2016) and Let the Devil Wear Black (1999). Not to say she can’t produce a quality movie, as I thought these two were quality pieces of work, but it’s always good to know what you’re going into.

I’m looking forward to it if only for the fact that we have a new stalker of the night. December 9th is a long way away, but I’ll be patient. 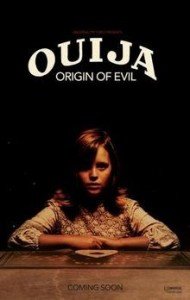 Ouija: Origin of Evil is a prequel to the Blumhouse production, Ouija (2014). Jason Blum confirmed the nature of the film shortly after the first film proved to be a success.

This one will focus on the two young daughters of a twisted medium who uses them as channels for the spirits of the underworld to travel back to our world to speak. This of course has negative results, as seen in the original, and things spiral out of control quickly.

The suspense-filled movie is again made by Blumhouse, seemingly the paragon of fear in the film industry right now, so I’ll be in the cinema on opening night.  October 21st will be a strange night indeed. 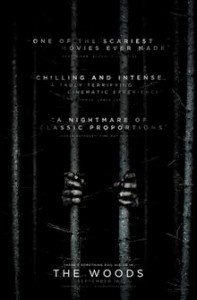 The Woods is a horror film surrounding hikers going through a forest, and is directed by Adam Winguard. Well known for his works in You’re Next, V/H/S and V/H/S 2, he’s a phenomenal director and skilled actor who has brought laughs as well as screams.  So, The Woods will likely be a slow-burn set off with a few short laughs and a lot of screams.

While not much is known about the movie yet, I can be happy that Lionsgate is backing it. The film itself seems as if it will take on a surreal quality similar to Witch (2015) and Mama (2015), which will undoubtedly make for a memorable movie. I can only hope the wait until September 16th will make this film all the more satisfying. 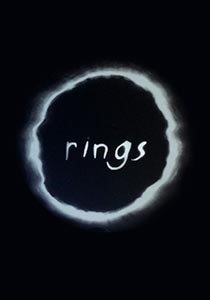 On October 28th we have Rings — the third movie in the Ring franchise that promises to bare it all in an over the top, psychological horror that can only be viewed by those who’ve seen the previous two movies.

So go on and rent the others so you can get up to speed, and then see this Asian-inspired horror legend re-emerge from her well to reality, where she kills whoever dares to watch her tape.

In this film a group of college kids dare each other to watch it, passing it from person to person in quick succession to see if the curse is true. When they naturally start dropping like flies, Julia and Holt have to find a way to stop the spirit in a measly three and a half days, or else they too will be claimed by the tortured spectre.

The film will no doubt have shock scares that only the bravest of the brave will be able to sit through, and our old friend Samara will be crawling through the darkness to render the soul of any who would try and see her face through the distorted film.

These are just a handful of films coming up in 2016, and by no means are they going to be the best. I selected them as I’m looking forward to each one, and felt that I should advertise them to my fellow horror enthusiasts so that you can be better prepared.

While we wait for the great movies to come, there are always things to fill the time with. The new feature It, based off of Stephen King’s titular novel, will be coming in September 2017. I would suggest reading the book in the meantime so you can fully enjoy Part One of the film, as it looks like they’re going to be pulling out all the stops when it comes to this one.

Until then, stay scared and enjoy what frightens you most!