Blood Drive depicts a world we should attempt to avoid at all costs. Cash points dispensing heavily rationed water, an abundance of homelessness, no food, and corporate greed causing it all.

The world is a very different, unsettling place. However, despite the depravity, there is something fascinating about a world which is drastically broken beyond repair. 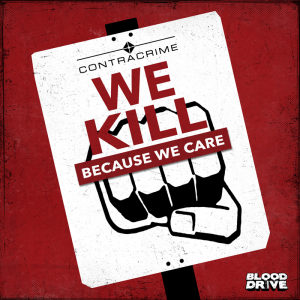 In the opening scene we meet Grace, a badass brunette sucking suggestively on a lollypop whilst parked on the side of a desolate road. Two guys spot her and pull up. What starts of as some light-hearted flirting soon becomes uncomfortable and Grace is quick to get in her car a drive away.

The two men persue her, and eventually Grace runs out of fuel and has to stop. Angered by seemingly wasting $500 worth of gas chasing her, one of the men becomes aggressive, grabs her, and bends her over. His friend turns his back so he does not have to watch what is about to happen.

Bent over in her car, Grace reaches for her gear stick which doubles up as a detachable pointy metal weapon which she thrusts up into her attackers crotch. She then pops open the hood of her car and naturally, feeds the man’s body to her car engine. Yes, you read that correctly! But I guess that in world where over population is vast and resources are limited, what could be more eco-friendly than motor vehicles that run on blood?

And so it begins! This, the first scene of Blood Drive, really does set the tone for the show — fast paced, action packed, gore galore, and fun.

The main focal point of the series is, as you might have guessed, a ‘Blood Drive’. This is a secret road race which give racers the chance to escape the forced poverty, with the promise of a ten million dollar cash prize to whoever comes first. And our new heroine Grace is one of the competitors.

The first episode gives you an insight into the quirky and unusual characters set to appear over the duration of the series.

Grace is paired unwillingly with a cop who is quickly given the nick name ‘Barbie’, and together they must race against a group of oddballs with names like ‘Clown Dick’, ‘Fat Elvis’, and ‘The Scholar and The Gentleman’, to name but a few.

I don’t want to give away too much as the first episode airs on British television on August 10th, but it is seriously worth watching. As someone who likes to wait for a series to finish and then binge watch it, it is unusual for me to say that I will most definitely be tuning in next week to SyFy to watch the second episode. If the second episode is as good as the first, I think we’re in for a real treat!