A decade after the release of the first film, a retrospective on the anthology franchise. 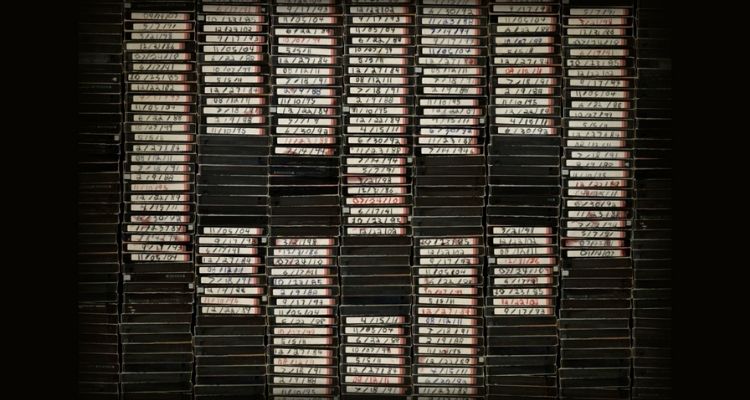 ‘I like you.’
With the first film premiering at the 2012 Sundance Film Festival – and in fact, only just making the deadline, as the producers continued to work on it until the last minute – the V/H/S franchise became the series that turned the found footage genre on its head.

How so?
Well, the formula for found footage, going all the way back to The Blair Witch Project, was to start with the mundane and then slowly, insidiously, start to suggest elements of horror. But a key element was not to present anything too overt; do not put it on the screen, if you like. In The Blair Witch Project, for example, we never get more than a glimpse of the witch herself.

The V/H/S films threw that convention out of the window, with a howl of gleeful delight!

The template is to start with something reassuringly comfortable – a slumber party; a skateboarding holiday; a honeymoon – and then go so wildly beyond what you could expect that you are left wondering what the Hell it is that you are watching. And in my case, gurgling with glee at the sheer horrorgasm extremity of it all! So, dig out your old VHS machines and let’s go take a look.

Warning: Because this franchise is more than a decade old, I’m not going to work especially hard to avoid spoilers. 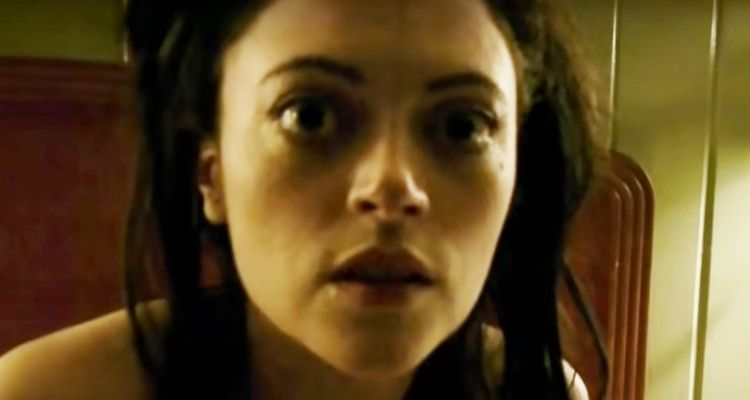 The one that started it all, and established the template: an anthology set-up, with one over-arching story wherein various groups of people find a collection of old VHS tapes and start viewing them.
Producer Brad Miska described their process as a ‘trust-fall’ approach to indie filmmaking; the producers approached known filmmakers and asked for their ideas. Once the pitches were accepted, the filmmakers were left alone to create their segments as they saw fit. This is what led to the deliciously dissonant nature of the various stories.

V/H/S gives us a new slant on serial killers, slashers, aliens, and poltergeists, but there is only one Queen of this film:

Three young men have rented a hotel room, intending to party. When they return to it with two drunk women, it becomes clear what their intentions are, not least of which because one of them is filming everything. But when one of the women passes out, it becomes clear that the other is anything but what she seems.

‘Lily’ is a powerful and dangerous succubus who is herself on the hunt. The final sequence shows her fully winged and transformed, carrying one of the guys off into the night sky, still from his perspective. The segment became such a cult favourite that it spawned its own spin-off (see below). 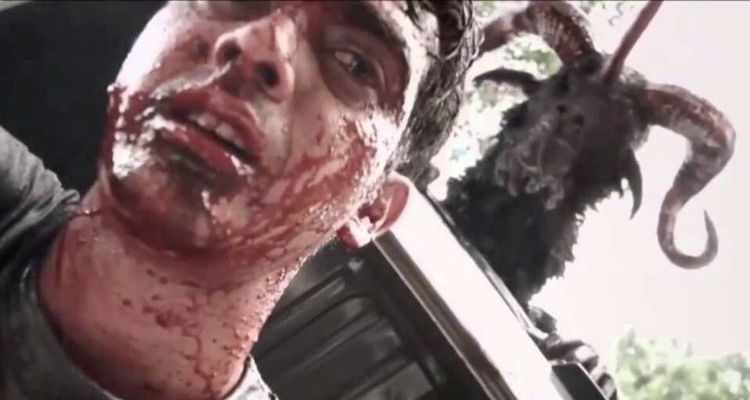 Made fast on the heels of the original, due to its success, this sequel drew in a new group of directors, including Gareth Evans (The Raid), Eduardo Sanchez, and Gregg Hale (both of The Blair Witch Project fame).

As well as V/H/S’s particular take on ghosts and zombies, this one gives us a typically deranged slant on the private investigator / disappeared person story. The standout is hard to call because ‘Slumber Party Alien Abduction’ is a genius take on that subgenre, but in the end, I went with:

A team of investigative journalists is in Indonesia to shoot a documentary about a cult called Paradise Gates. The cult is headed by a charismatic leader dubbed ‘Father’. There are occult symbols on the walls, odd behaviour, hints of demon-worship, and so on. It’s all quite standard to start with; echoes of Rosemary’s Baby, etc.

Except it’s V/H/S, so then all the cultists start committing suicide and the demon Baphomet tears itself out of a woman’s body and chases the remaining journalist, crashing his vehicle, and finally referring to him as ‘Papa.’ 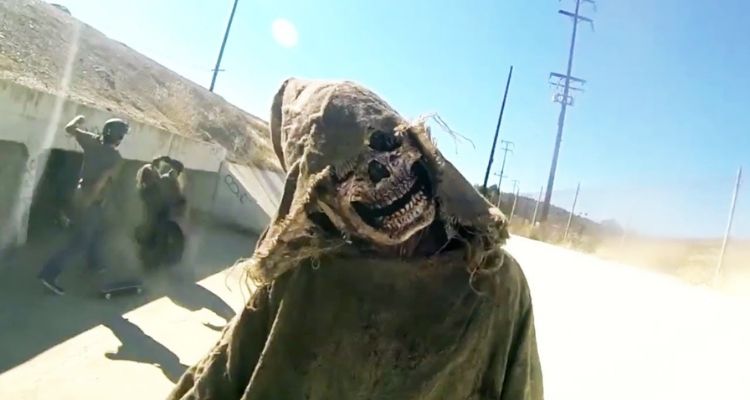 Highlights of this one include an amateur magician (empowered and corrupted by a magical cape) and demonic genitalia. Yes, you read that right. But…

A trio of skateboarders take a trip to Tijuana, to shoot a video to promote themselves. When they find an old flood channel, one of them unwisely decides to bleed on a pentagram they find painted there.
Aaaaaaand crazed cultists attack skaters who blow them up with fireworks, turning them into zombified skeletons and then a demonic monster emerges from a storm drain and starts eating people.
Where are you going to get this kind of stuff, apart from V/H/S? 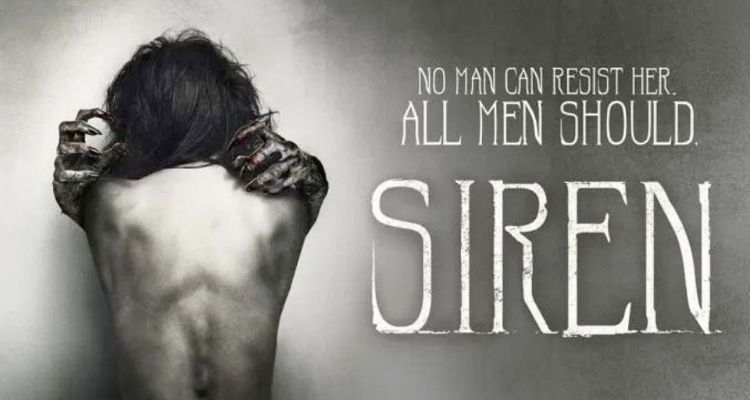 This is officially a V/H/S film since it features Lily, the demon from the first film; however, it is not shot in found footage format, nor is it an anthology, preferring instead to opt for a more standard single linear story. Lily moves to occupy a more anti-heroine status, as villainous club-owner Nyx takes on the antagonist role.

It’s a perfectly decent monster horror and Hannah Fierman’s unearthly performance as the succubus remains strong, but without any of the hallmarks of the V/H/S series, it lacks the distinctive feel of the others. 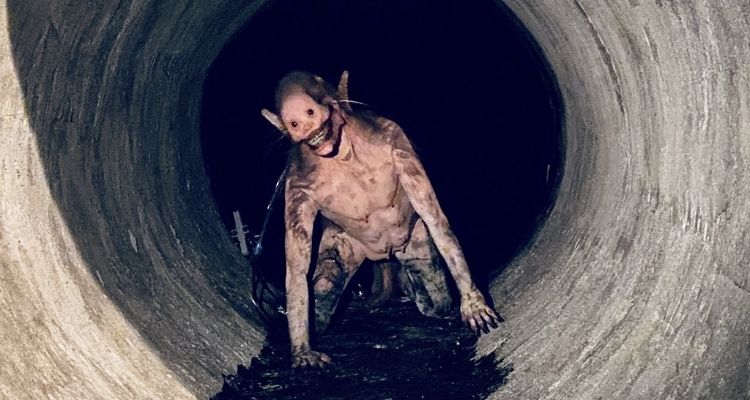 Positioned as a ‘re-boot’, this Shudder original is still very true to the spirit of the series and was well-received by fans and critics alike. The film’s subtitle is a reference to the year handheld cameras became publicly available. We get a new slant on the old ‘monster in the sewer’ fable, a terrifyingly violent vampire, and a dread-soaked zombie episode in a funeral home.

We also have a fake commercial, for the ‘Potato Smasher’, which is as violent as the tales that surround it.

In Indonesia, a kidnap victim identified only as S.A. wakes up in the nightmarish lair of deranged scientist Dr. James Suhendra. She quickly realises that he has transformed her into a monstrous cyborg. When a brutish squad of armed police break in, her appearance is so horrific their immediate reaction is to kill her as a mercy. That doesn’t happen though, as Suhendra’s contingency plan kicks in, and his previous creation, Subject 98 begins a bloody rampage.

This is a first-class body horror, reminiscent of some of the classic low-budget cyborg films of the 70s and 80s. 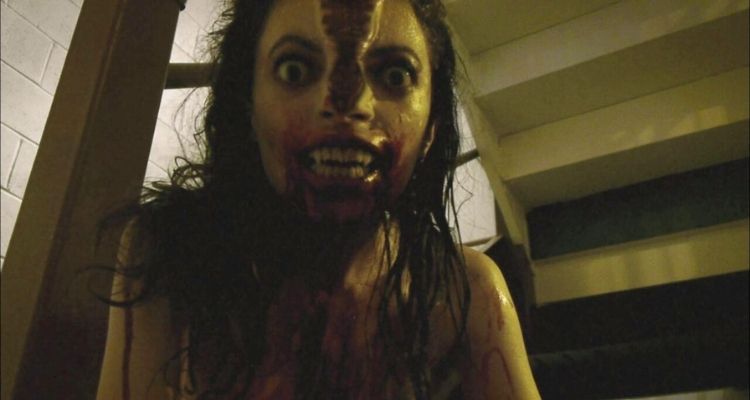 And if that’s not enough for you, there’s a little-known miniseries called V/H/S: Viral Horror Shorts that premiered on Snapchat as a Snap Original series.