Now, I know we predominantly champion low-budget horror here, but we also very much appreciate clever marketing.  As independent film makers, it’s often good form to learn techniques from the people that studios are only too happy to pay millions of dollars for. And yesterday at Comic Con, Lionsgate shocked everyone with a secret sequel concept. What does that mean I hear you ask… Well, It turns out that Adam Wingard’s hugely anticipated shocker The Woods is ACTUALLY a Blair Witch sequel. 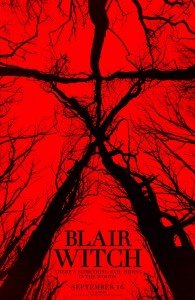 Yes – you’re reading that correctly.  Everything you’ve heard about The Woods has been a lie. Ok, that might be a bit dramatic.  But all this time, The Woods has secretly been the second sequel to Eduardo Sanchez’s genre-defining The Blair Witch Project.  Now, based on the calibre of the first sequel, Book Of Shadows: Blair Witch 2, I wouldn’t blame you if you didn’t start buzzing with excitement.  But, if the initial reviews are anything to go by, then The Woo– sorry… Blair Witch is actually pretty good.

Co-written by Wingard’s long-time collaborator Simon Barrett, the early synopsis is as follows:

A group of college students venture into the Black Hills Forest in Maryland to uncover the mysteries surrounding the disappearance of James’ sister who many believe is connected to the legend of the Blair Witch. At first the group is hopeful, especially when a pair of locals offer to act as guides through the dark and winding woods, but as the endless night wears on, the group is visited by a menacing presence. Slowly, they begin to realize the legend is all too real and more sinister than they could have imagined.

No matter what your thoughts are on big money, uninspiring sequels, you have to take your hat off to Lionsgate for at least trying something a little bit novel. And much like the marketing for the original Blair Witch Project, it seems to have worked.  It’s driven me out of bed at this ungodly hour at the very least.

So here, unveiled for the first time, is the REAL trailer for Blair Witch.  Enjoy!